The Tale of Indy's Paw 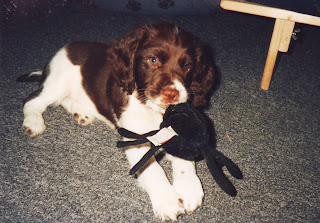 This week Indy started limping and when he wasn’t limping around he was holding his paw up and looking pathetic and generally miserable.

This week I hurt my foot. I could barely walk, but you didn’t hear me complain. I waved my paw at her occasionally and she told me to stop playing the old soldier. Old? That's me on the right with my pet spider when I was just a child (poor spider - he went to pieces, literally). I still am. I will never grow up.

It made me cry.

So off we went to the vets.

So she took me to the Chamber of Horrors.

In the waiting room was a beautiful Rottweiler, a dear little Border Terrier and a gorgeous border collie. They were all so good too sitting quietly and waiting patiently. Indy behaved perfectly.

In the waiting room was a massive Rottweiler that licked his lips and said I looked tasty, a Border Terrier that laughed at my sore paw and a border collie that said I was too inferior to bother with. I was too scared to move so I sat like a statue - except when I climbed on her lap but she called me a wuss and made me sit on the floor.

I had visions of operations for Indy as I hadn’t been able to find anything in his paw and was worried he’d cracked a bone or something. You know how it goes. Your imagination starts running riot and before you know it you’ve got them hobbling round on crutches with their legs in plaster.

I had visions of operations for myself. You know what it's like. She keeps looking at you with a worried expression and you start to think she knows something you don't. Apart from that she kept poking round in my paw and looking at it through her magnifying glass. I mean what an insult - suggesting you'd need a magnifying glass to see my injury. The pain was terrible, although I hid it well.

I’d even made contingency plans with everyone in case I had to take him back the next day for an operation – that’s how bad it had got in my mind.

When we left home I told Tilly that if I didn’t come back she could have my green rubber bone and I asked her not to forget me.

He has been known to overdo the running about at times and he gets a little stiff after, but this was different.

She has been known to overdo the tennis ball games which results in me having aches and pains and her having achy arms. It’s her fault.

Our lovely vet, Elena, took us outside and watched him walking up and down. Did he limp? Did he hell. And here’s the amazing thing – he came back in without a fuss! If it had been Tilly, I doubt I would ever have got her back through the doors once she’d been out of them.

I like Elena. She asked me to walk up and down so I bravely put my best foot forward and tried not to limp. I was keen to get back inside – some of the vets give me treats.

She spent ages looking at his paw and found a tiny scabby spot deep up inside. Something has pierced it – a thorn perhaps. Elena is almost certain there’s nothing in there, but if it flares up again when his tablets have finished, she’ll know there is. So he’s got antibiotics and an anti-inflammatory. That was Thursday and he’s already a lot happier and limping less.

She spent ages looking at my paw and finally found the sore spot. Since I’ve been on the meds, I feel so much better. A bit spaced out at times, but happier.

Next came the eye examination. Luminous green dye was put in and it didn’t appear down his nose so his tear duct is blocked again. He’s got drops for that which hopefully will do the trick, but if they don’t he’ll need his tear duct flushing and I don’t even want to think about that.

She put something in my eye and then looked up my right nostril and said something about a duct. A viaduct maybe? What that has to do with the price of Bonios I don’t know.
Tilly was ecstatic when we came home. I had to get the appointment when I knew someone would be home with her. I knew she’d be upset with Indy not there and she was. She really does love the bones of her brother.

Tilly went mad when I got home. “What are you doing here?” she said, trying to shove me back out of the door. “If you think you’re getting that green bone back you can think again, Buster.” See, she’d already forgotten my name.

He goes completely limp at the vets. He flopped down on the examination table, draped his head over my arm and just relaxed completely. He always has. Even as a little puppy I used to put him on the table for his vaccinations and he’d just go boneless and sprawl. It’s like he’s giving up.

I relax completely at the vets, especially if it is a lady vet. They make such a fuss of me and are so kind, what else is a boy to do? 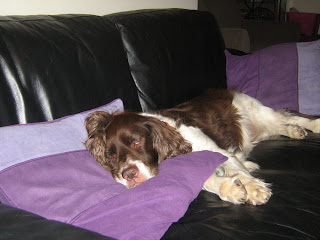