Plight of the Rhino

A few months ago I was invited to contribute a story to the first charity anthology by Springbok Publications. Each story in the book is about a different animal and I chose to write mine about the hyena – a much maligned animal.

I spent many hours researching and many more writing the story. I can honestly say I really put my heart and soul into it and I was over the moon when it was accepted.

The book is now available to buy on Amazon UK and Amazon.

After each story and poem, there is some information about the animal featured. And the animals include the Scottish Wild Cat, Hyena, Cheetah, Eagle and of course, the Rhino.

Rhinos are endangered. If action isn’t taken now, in a little over ten years they will be extinct. It is a tragedy the way people are gradually wiping out the other creatures on this planet. I think we’ve all seen the image of that awful woman posing with the beautiful lion she’d just killed. How can anyone do that? It’s beyond my understanding.

The illustrations are lovely and the cover artwork is stunning. 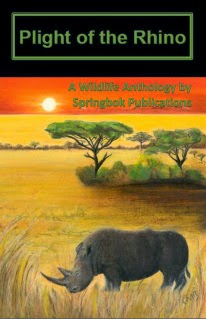 For the next few evenings there is an online launch party on Facebook starting at 19.30, so please come along and say hello (you don’t have to say anything if you don’t want to, but it would be nice to see you there). Josephine from Save the Rhino International will be joining in at some point too. 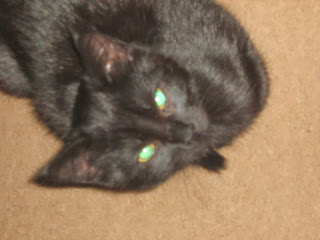 I had to call in at the local cat rescue a couple of weeks ago and while I was there, I went to see the residents. I could have come home with the lot of them. Well I couldn’t, but I wanted to!

As you know, black cats and kittens are the hardest to rehome and I just don’t know why.

Harley was thrown over the sea wall with her brother. They both had worms and her brother had a poorly tum, although he is doing well now. The lovely young lass who runs the rescue has kept him!

Thank goodness someone saw the kittens being thrown away. It doesn’t bear thinking about what would have become of them if no one had noticed.

I felt a connection the minute I saw Harley. Perhaps because she looked so much like my cat Gizmo who was the sweetest, most affectionate boy.

We brought her home last Sunday and kept her separated from Fizz at first. We’ve been taking it slow and Harley has been so calm around her new big sister. Fizz has hissed, growled, spat, grumbled and even refused to eat for a while – unless I hand fed her little pieces of chicken! 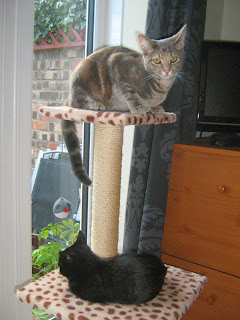 Harley is very friendly and greets everyone who comes to the house with purrs and cuddles, and she adores the children! 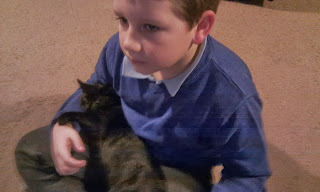 She hissed once at Indy when he first sniffed her, but now they rub noses. I think she’s charmed him just as much as Fizz did!

I hadn't realised just how much Fizz had grown though! 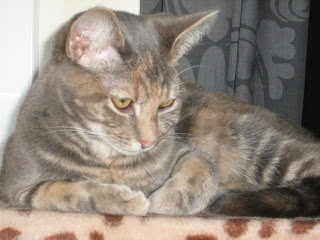 Haven’t been around Blogland much. I’ve said before, I don’t like November and tend to retreat a bit during this month.

On 14th November it was two years since Tilly died and on the 18th it was 38 years since my dad died. Apart from those two anniversaries, November often seems to bring bad news and sadness.

Indy has slowed down a lot – unless food is involved, then he can move faster than a speeding bullet. Well almost.

He’s got a cough and as well as all his usual lumps and bumps and skin tags, another spot appeared on his head. I looked it up online and scared myself.

So we took him back for his three month check up a few weeks early. I was concerned that the cough might be a heart problem, but the good news is that his heart is fine and his lungs are clear.

But his windpipe is inflamed. He’s on antibiotics and if they don’t bring about an improvement, Tom is going to try him with a bronchodilator.

And the spot. Nothing to worry about. Phew.

Last Sunday Indy asked to go out at 5.30 am and Fizz nipped out with him, then didn’t want to come in, so I left her outside and went back to bed. Just after 6 I was woken by that awful cat fight screeching noise. We ran downstairs – I slipped and went the last few on my behind - dashed outside and there was no sign of her.

After wandering round the neighbourhood in the freezing cold, we went in to get dressed (in proper clothes I mean rather than what we woke up in) and she appeared from nowhere, shaken but not stirred. She had breakfast then insisted on going out again and actually spent more time outside than she normally does. So I wonder if maybe she wasn’t beaten up, but had scared an intruder cat off. She's still small, but I wouldn't want to be on the wrong side of her!

One of their favourite places is under my desk with all the wires. Fizz is like Indy's shadow. She adores him and he enjoys being adored! 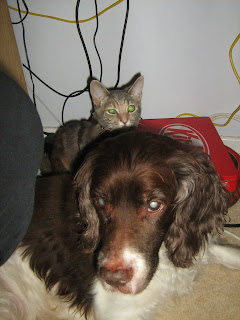 Round at my daughter's the other day waiting for a delivery, I took my notebook thinking I'd make good use of the peace and quiet. Her young and extremely affectionate cat, Tiger, had other ideas! So we had a cuddle instead. 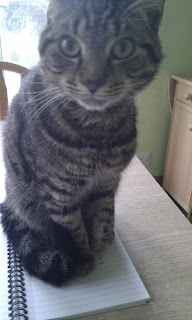 A few months ago, I mentioned a project I was very excited to be part of. News coming soon of that! It’s a new charity anthology. Anyway, more about that next time.

Also, we are getting another kitten. More about that later too!