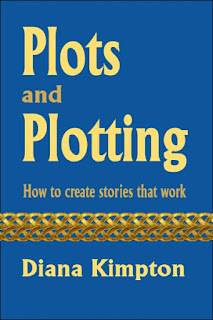 As soon as I heard that Diana Kimpton had written a book about plotting, I went straight to Amazon and bought myself a copy. As I read it I felt as if this book had been written for me. I have found it hugely inspiring and I highly recommend it. 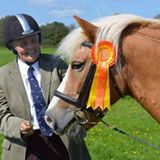 I am delighted that Diana has written a post for this blog and everyone who comments will go into a draw to win a signed copy of Plots and Plotting. The winner of the book will be announced on Sunday, 1st July.

Now over to Diana!

When I first became a writer, I struggled to write anything longer than a picture book or short story. I was so bad that my first attempt at a novel was rejected for having a weak plot and a flat ending. I was devastated by that comment so I dived into books on story structure in an attempt to learn to plot.

After lots of study, I could recognize inciting incidents, pick out turning points and have a good stab at analysing the hero's journey. I could even spot what was wrong with some of the bad films and books I came across. But that didn't help me create my own plots, because story analysis is a completely different skill from story creation. However hard you study a finished book or film, you can't tell how the ideas came together in the writer's mind.

In response to the advice often given to writers, I tried creating characters and seeing where they would go. But mine packed up and left in chapter 3 because the story was so boring. Then I tried working out a chapter by chapter breakdown. But that acted like a straightjacket on my creativity and resulted in the bad novel I mentioned in the first paragraph.

Finally I discovered step outlining: a technique that freed my creativity and took me from rejection to selling a million copies of my books.  It lets me start with any scene in my story and work backwards or forwards from there to create my plot. I usually work out a complete step outline before I start writing as that minimises the number of drafts I have to do. But sometimes I start writing earlier and use the step outline to help with the rewriting or I use a stop and start technique of plot, write, plot, write. There is no right way to work and no set rules. Step outlining gives you the freedom to find a way of plotting that works for you and your story.

My methods have worked so well for me that I decided to pass them on to other writers. But when I started writing Plots and Plotting, my test readers asked for examples to help them see how my ideas work in action. That created a problem. I couldn't use other people's books because I didn't know how their writers created them, and I couldn't use my own books either because I couldn't remember exactly how I worked out their plots. In the end, I decided to demonstrate step-outlining live by developing a brand new story as I wrote - revealing all my mistakes, changes of mind and occasional flashes of inspiration in the process. I don't know if I'll ever turn that plot into a novel,  but I've enjoyed providing an insight into how a writer's mind works and the feedback I've had from readers suggest they enjoy it too.

I've noticed that this blog has lots of photos of dogs. I don't have one so I thought you'd like to see a photo of my horse instead.  He gets a mention in the book because I bought a horse to help with my research for There Must Be Horses.  (Well that was my excuse anyway). 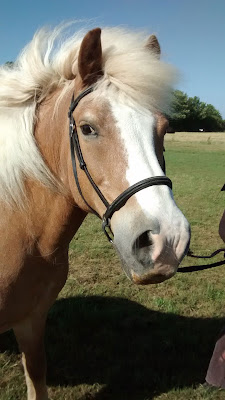 Diana Kimpton is the author of more than 40 books, including her successful Pony-Mad Princess series. She writes for adults as well as children and many of her books have been translated into other languages. You can find out more about her at www.dianakimpton.co.uk

Plots and Plotting is available from Amazon.co.uk and Amazon.com

I took this photo on the 20th May of a swan family on one of the dykes. Eight cygnets! What a handful – or wingful - those parents have. I can’t zoom my phone camera in any more for some reason. 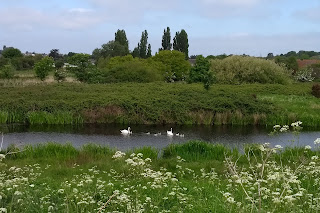 I got this one today. Very happy to see all eight cygnets, but not happy not being able to zoom in. 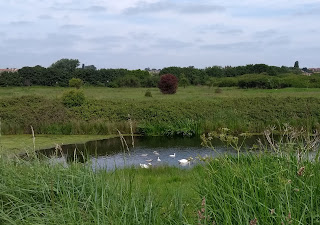 There was a bit of a to do in the garden this morning. Shrieking magpies, other birds joining in. Noticed Tinks on the fence by the oak tree being mobbed.

Dusty shot out and immediately spotted something bouncing about in the bushes – young magpie!

The whole thing only lasted a few seconds, but wow, it was intense! How anyone gets pleasure from having one animal hunt another is beyond me! I felt sick afterwards thinking what could have happened.

I went out the front and checked under the cars, but there was no sign of the youngster, so I assume it managed to fly off and rejoin its parents.

But there was an even bigger to do on Monday.

I found the remains of a baby bird in our downstairs loo/utility room. Cleared it up feeling sad and muttering about murdering cats. Then a bit later we heard a bird tweeting in there. It was coming from inside where all the pipes are boarded in.

Hubby wrestled the bottom panel off and there was just one baby bird in there with very few feathers. I was in tears thinking there was no hope for the poor little thing which must have fallen about 20 feet down the shaft, but we lined a box with kitchen paper and loo paper and some clean hay and popped her in.

I reckoned we had an 8-10 day old-ish female house sparrow. I didn’t hold out any hope at all, but I started feeding her.

I took this photo on Wednesday. 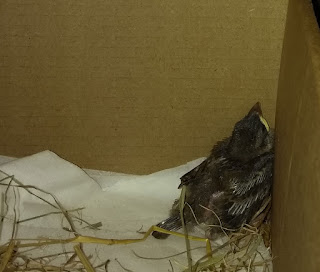 We saw Tinks later with her arm right in the gap beside the loo waste pipe fishing about behind the panel which is presumably how she got the other poor little thing. They must have fallen about 20 feet down the shaft.

Yesterday I transferred the sparrow from the box to a cage (cheap one I picked up) so she had more space to test her wings (and would be safer), but she hopped up on the side of the box and fluttered across the bed and onto the floor. A good sign I thought!

I took this photo today and just look at those feathers! If you can see them that is. It isn't a great photo.  Amazing how much she’s developed since Monday. 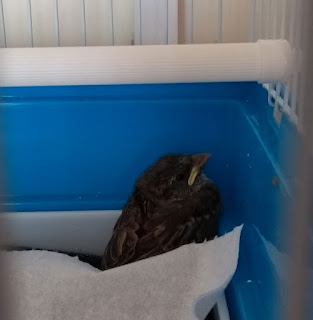 She’d just had a meal and was settling down to sleep. I am trying very hard not to imprint on her as I want her to be wary of humans and I never let her see the dogs or cats for obvious reasons.

Letting her go when the time comes (and I hope it does) is going to be hard! But there are a lot of sparrows out there for her to join up with.

Talking of things growing rapidly, Scout is now way taller than Poppy and Dusty. This was her at the beginning of May. 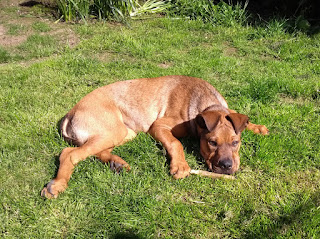 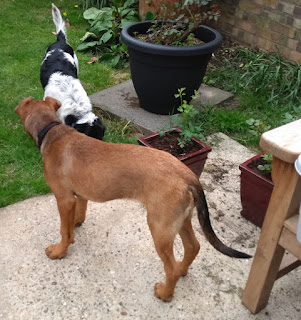 And this was last week when she was playing in the sea with Poppy while Dusty stands patiently waiting for someone to throw a ball for him! 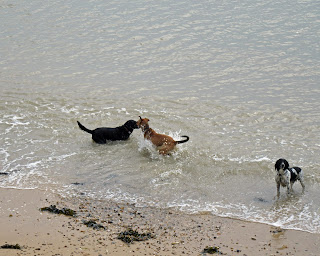 When they’re at home, it’s Dusty and Scout that play together – constantly! The only time they stop is if we separate them and once they're apart, they both flake out - as do I!