There are advantages to there not being a heat wave and ferocious sunshine in the holidays. I’ve hardly had to use any sun screen at all so far! So I haven’t been worrying about sunburn.

The small hardy souls have braved the sea a few times, but the wind hasn’t seemed to drop for the past week so there are always waves. Sometimes big ones – but they love going out then swimming in with the waves behind them which is something I used to love to do – and still do. But it’s nerve racking watching them.

I don’t know why, but the sea always seems warmer when it’s rough.

We went to the Colne Valley Railway. We hadn’t been for several years and I thought with them being older now that they’d be disappointed (they asked to go), but they had a lovely time. We went on a steam day, but they liked riding on the little mini train more than on the steam train.

We stopped going once there were four as going back and forth over the railway bridge used to be nerve racking with toddlers and buggies. When I saw the bridge, it seemed much smaller than I remembered – it was twice as big in my memory. And now it’s possible to cross the line without going over the bridge – but of course they wanted to go over it! We did cross the line once, but even that I found nerve racking.

Tomorrow we’re going to the pool so there won’t be any waves to worry about, but slippery pool floors…. Nerve racking.

I even worry when we go crabbing that one of them might accidentally throw themselves in or scrape their legs on the wall as they climb down to the ledge. How many times did I hurl myself in by mistake? None! Where do I get my daft ideas from? I have no idea.

I’m sure my nerves never used to be so racked when I was a parent of small children and they certainly weren’t when I was a child. I didn’t worry about getting dragged out to sea or slipping over at the pool or falling down the steps of the old railway bridge and they shouldn’t either. That’s my job.

The hardest thing of all is not letting my racked nerves show and pretending I'm as fearless as they are.

And another thing – I always thought it was nerve wracking, but from Googling, I think it may be nerve racking. As if my nerves aren’t racked enough!

But I am enjoying the school holidays, doing things I did as a child and as a young mum and reviving memories while making new ones. It's worth a few racked nerves.

Every day I am getting several “Anonymous” comments on various posts which is why I’ve set up moderated comments. These comments bear no relation to the posts they purport to comment on.

I wonder if it is because my poor old blog has become neglected in recent months.

The summer holidays have started and I’ve drawn up a plan! Nothing set in stone, but I’ve written the tide times on there and pencilled in a few things. I don’t want to get to the end and realise there were things we could have done and never got round to.

Some of them are off camping for a few days and my lovely granddaughters who live away are coming to stay next week. I’ve been looking forward to the holidays for ages.

One thing that will get done every day is a dog walk (or swim) before we do anything else. 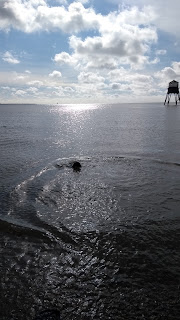 Dusty loves the beach hut taps. He sprawls out underneath and has a shower as well as a drink. 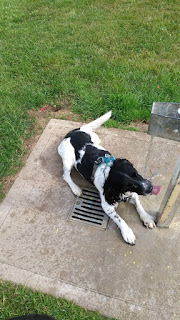 I was quite pleased with this Key Lime Pie I made which has no dairy or eggs. In the photo the middle is still frozen – it looks better once defrosted, but it went too quickly to get another photo… and I forgot anyway. It seems to be one of those things that everyone likes which is unusual. Even trifles don't disappear as quickly as this pie!

Hope you are enjoying the summer!