If you’re a Catherine Cookson fan, you may like to know that many of her books are now available on Kindle. I am re-reading Hamilton at the moment which I read for the first time in the 1980s.  I have never forgotten first getting the trilogy (Hamilton, Goodbye Hamilton and Harold) from the library and enjoying them. Hamilton is an imaginary horse. I had an imaginary horse as a child.

I am also reading SpyPrincess: The Life of Noor Inayat Khan by Shrabani Basu.

I don’t know how long Milly Johnson’s short story, Here Come the Boys is free on Kindle, but it is at the time of writing and it comes with a sneak peek of her new novel.

Also free is Danger at Mellin Cove by Rena George and you can read more about her new book, Mistress of Mellin Cove here.

I must admit I’ve become a Kindle convert after I’d insisted I’d miss reading “proper” books too much to give them up. I knew it had happened when I went through my Amazon wish list and changed all my paperbacks to kindle editions. 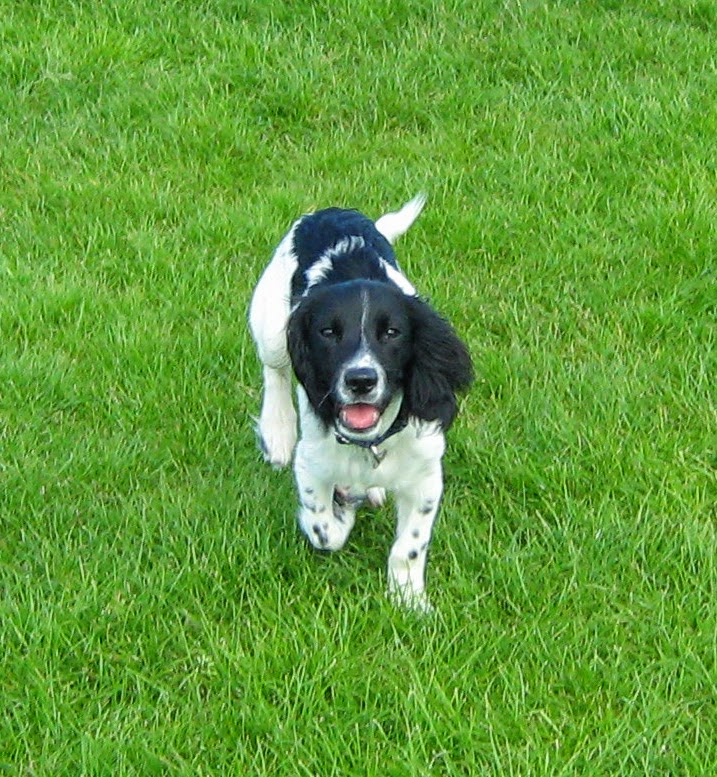 Following his terrifying plummet from my bed and his subsequent limp diagnosed as a soft tissue injury, Dusty gave me a fright last Sunday when he started whimpering and crying in the garden. I rushed out and found him holding up his paw (much like he is in the photo only without the happy smile). When he tried to put it down, he had it folded over so he was on his knuckle. Panic! He soon recovered and carried on limping round as normal, but I decided to take him back to the vet for another check-up.

Then on Monday he was hardly limping at all and I took him for a short walk to see how we got on and on Tuesday the limp had gone. Just like that. Like magic. I was careful at first, not letting him run about too much, but he’s completely back to normal, flying round like a mad thing. He knows he’s not allowed on my bed unless I say so – not that he takes any notice. But if Harley’s sleeping there, I won’t let him disturb her.

The other day he wriggled up and woke her up which was fine when he was just snuggling up, but then he got too pushy.

So she gave him a smack. 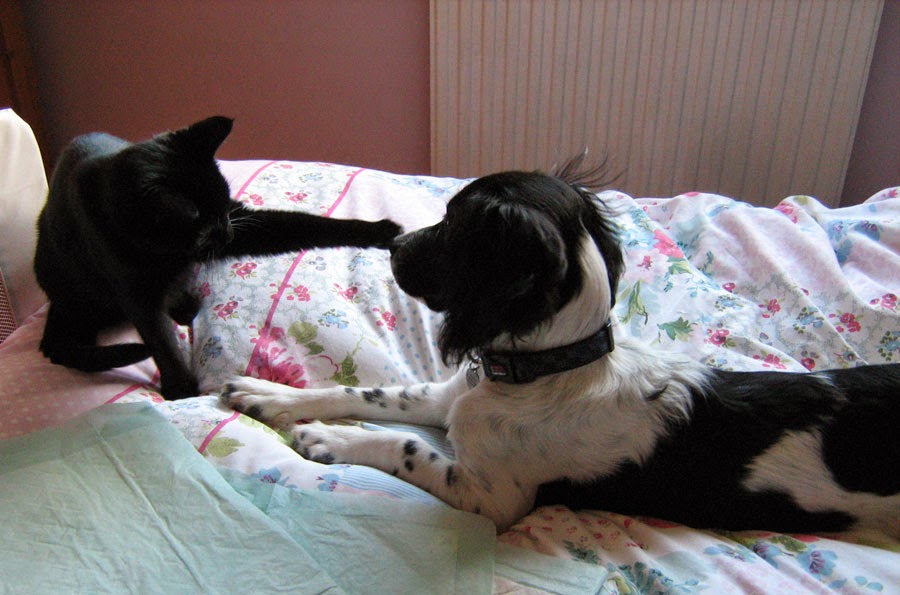 And she knows exactly where I hide the Dreamies. 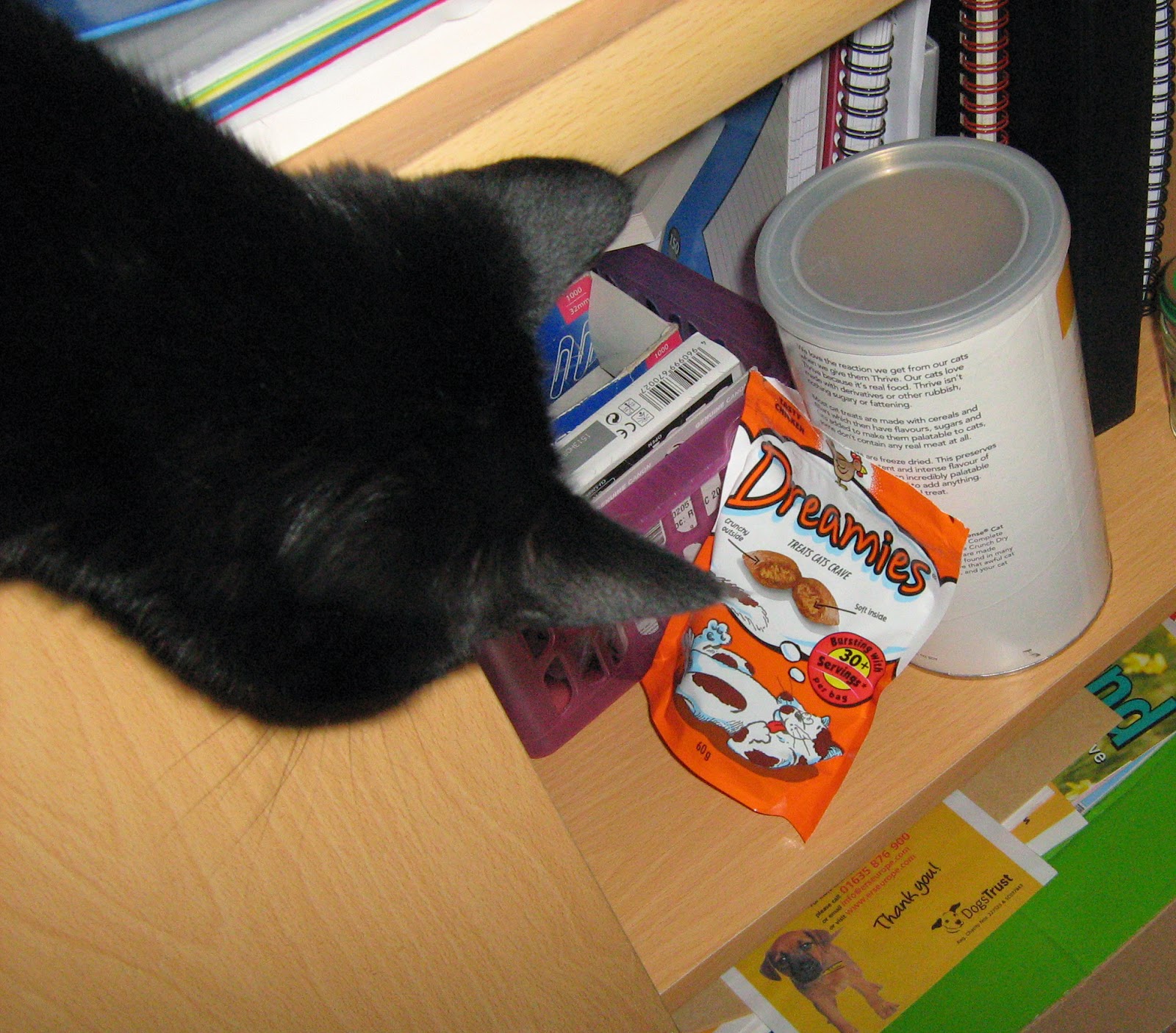 1.30 am:  Dusty goes outside, sniffs out interesting sniffs, disappears behind bushes and goes deaf to my reminders that he woke me up because he was desperate for a wee.

1.35 am: I struggle into the nearest pair of trainers which might be someone else’s size 13s, have a fruitless search for the torch, then go out to look for him in the pitch dark.

4 am: It is time to wake up. Yes it is! It is! It really is! Dusty is so hungry. He won’t last another minute without food. I pretend to be asleep.

4.30: He starts looking for things to destroy. The sound of ripping or gnawing gets me up. I am awake enough this time to remember dressing gown and crocs and I head for the garden. Dusty stays in the kitchen looking up at where I keep his food while I wander round outside on my own. I tell him to stop taking the micky and I go to clean out Harley’s litter tray. Harley wakes up and wants breakfast. So I feed her and she sniffs it and says, “I don’t fancy chicken today.”

4.45 am: Dusty goes to sleep next to my desk while I play senseless games like Odd Socks and Angry Birds on Facebook. Harley paces up and down on the filing cupboards, throwing things on the floor because she wants some of the dry chicken treats I have in the filing cupboard because she really really fancies chicken today. Dusty doesn’t move until I feed him at 7. Somehow he has managed not to starve to death.

And so the day begins.

“You haven’t fed us for at least half an hour. We want food!” 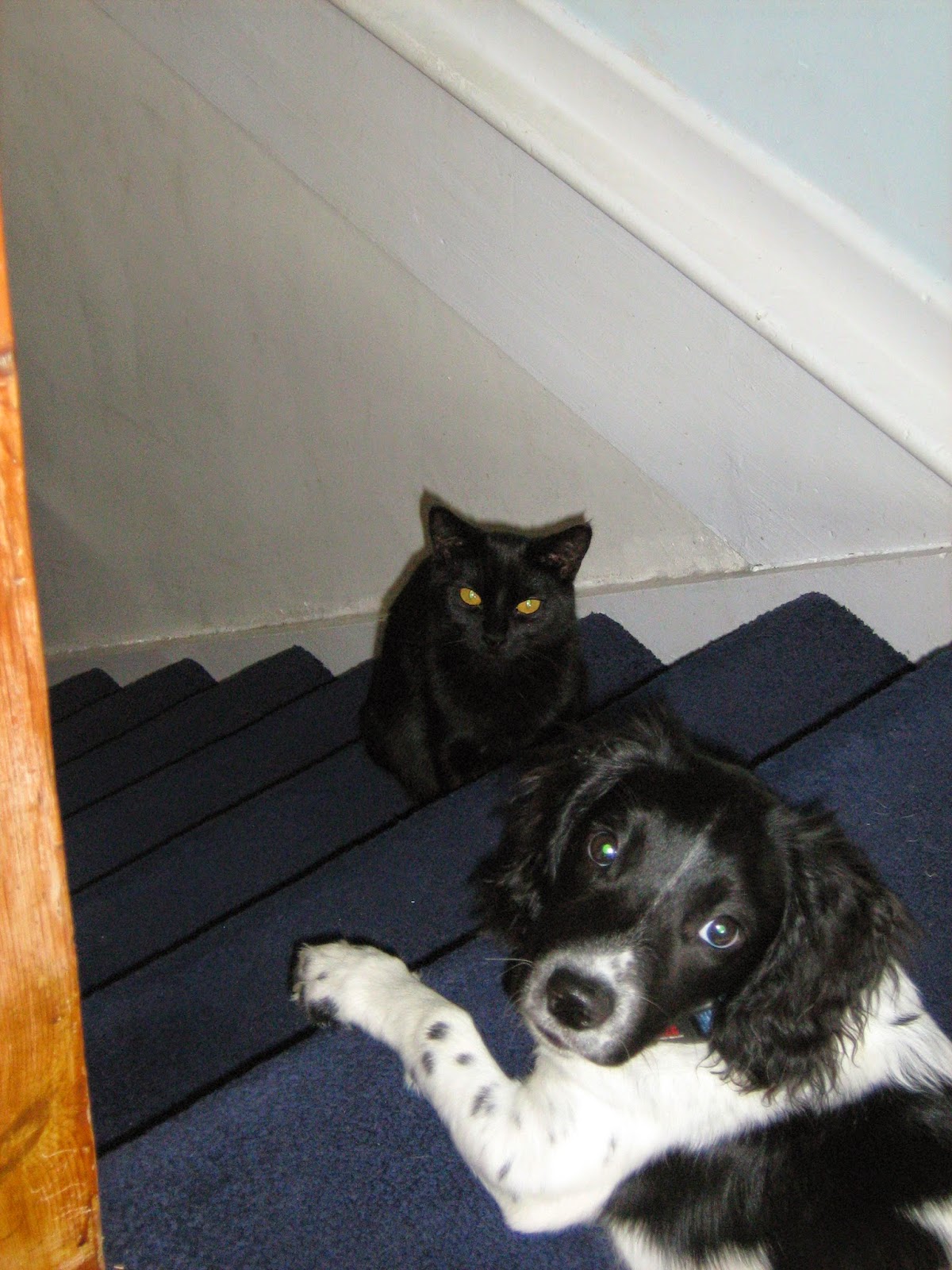 “Yes, I was chewing the Alienware file, but I’m hungry and bored and I’ve only been out for two walks,” 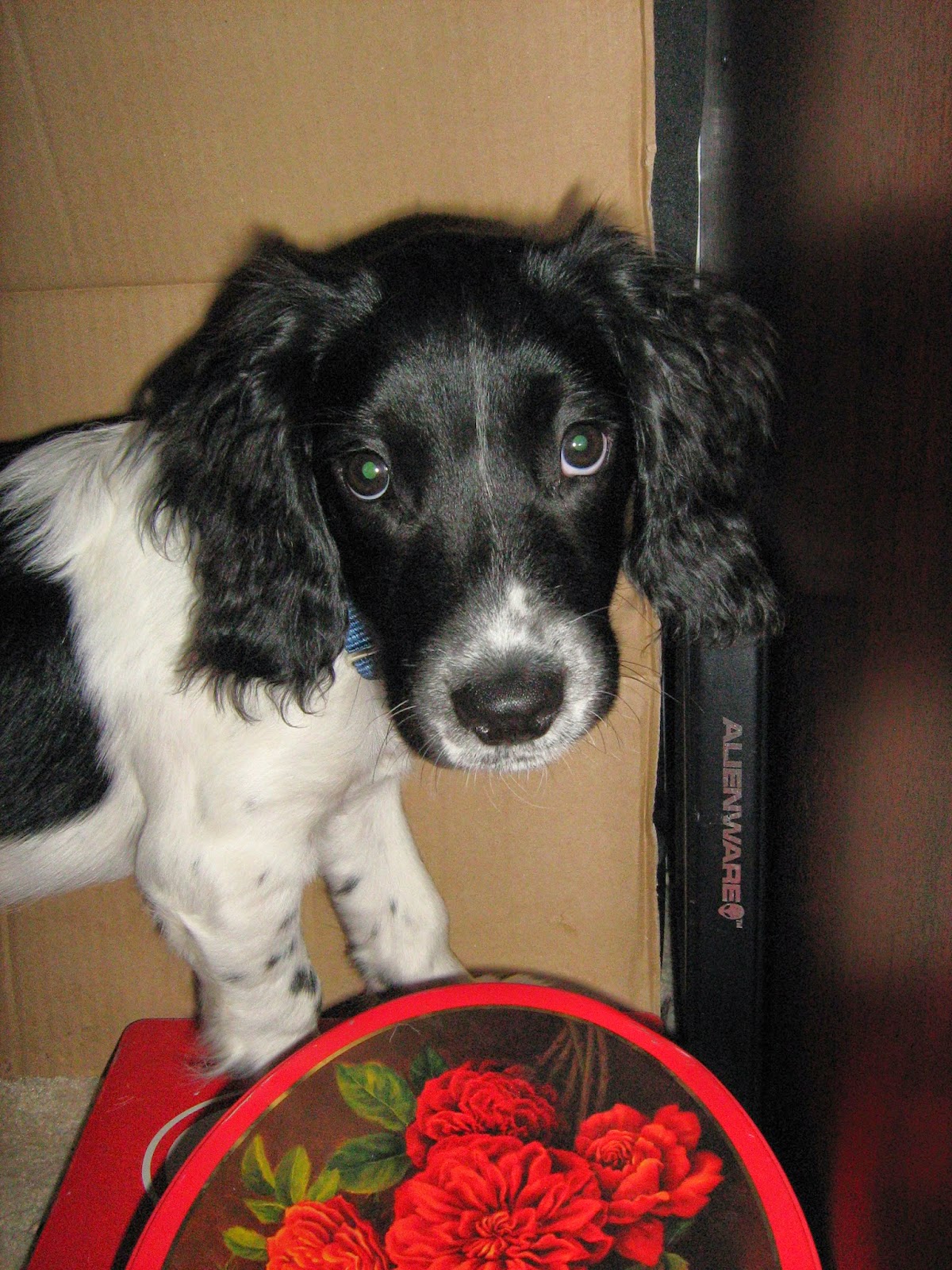 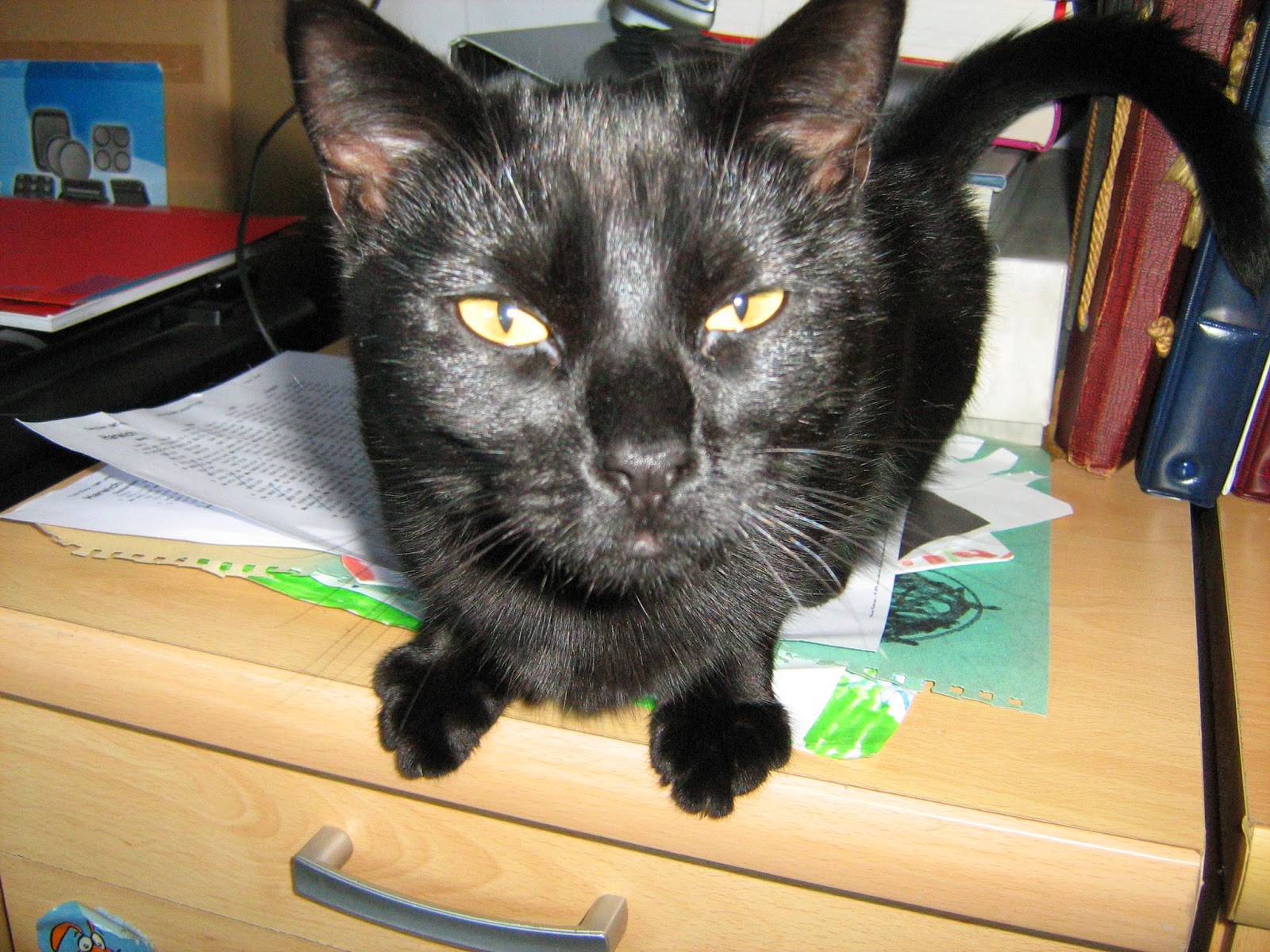 “I am pretending to play with the smallest boy, but really I am chewing the end of the tablet cable and no one knows mwahahahaha. It wouldn’t happen if they fed me.” 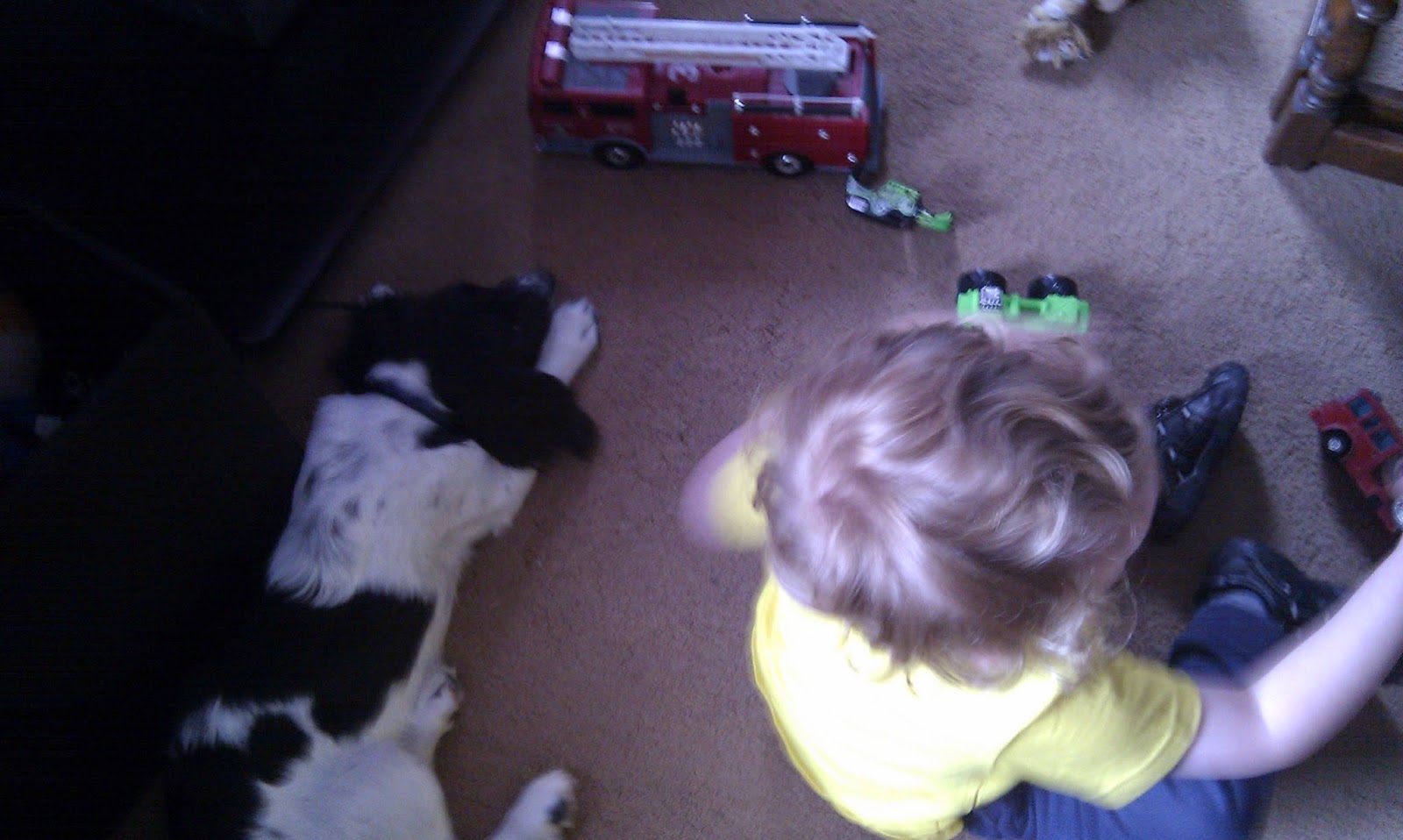 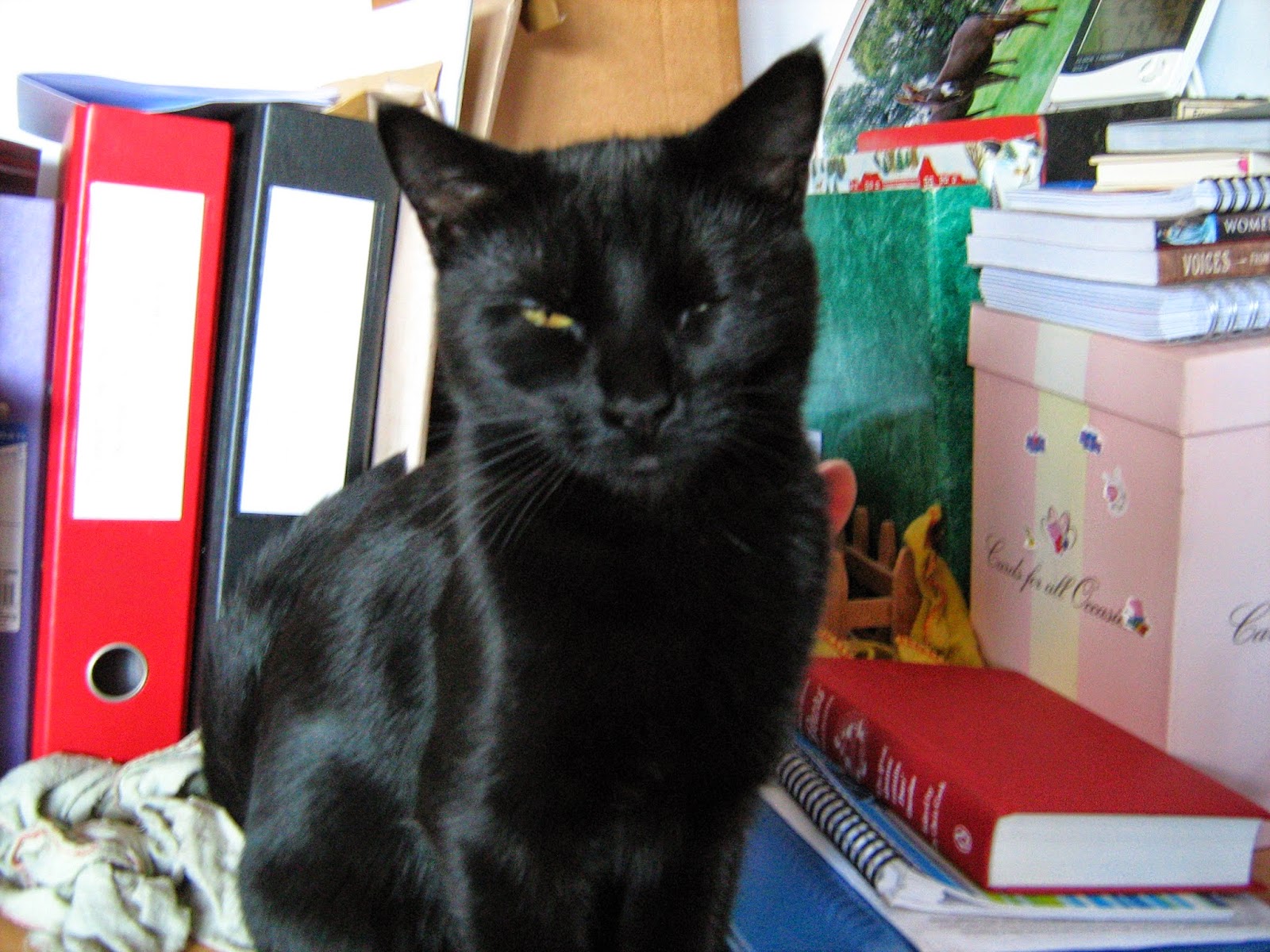 “These magazines aren’t as tasty as I thought, but if they were to feed me I wouldn’t have to eat paper.” 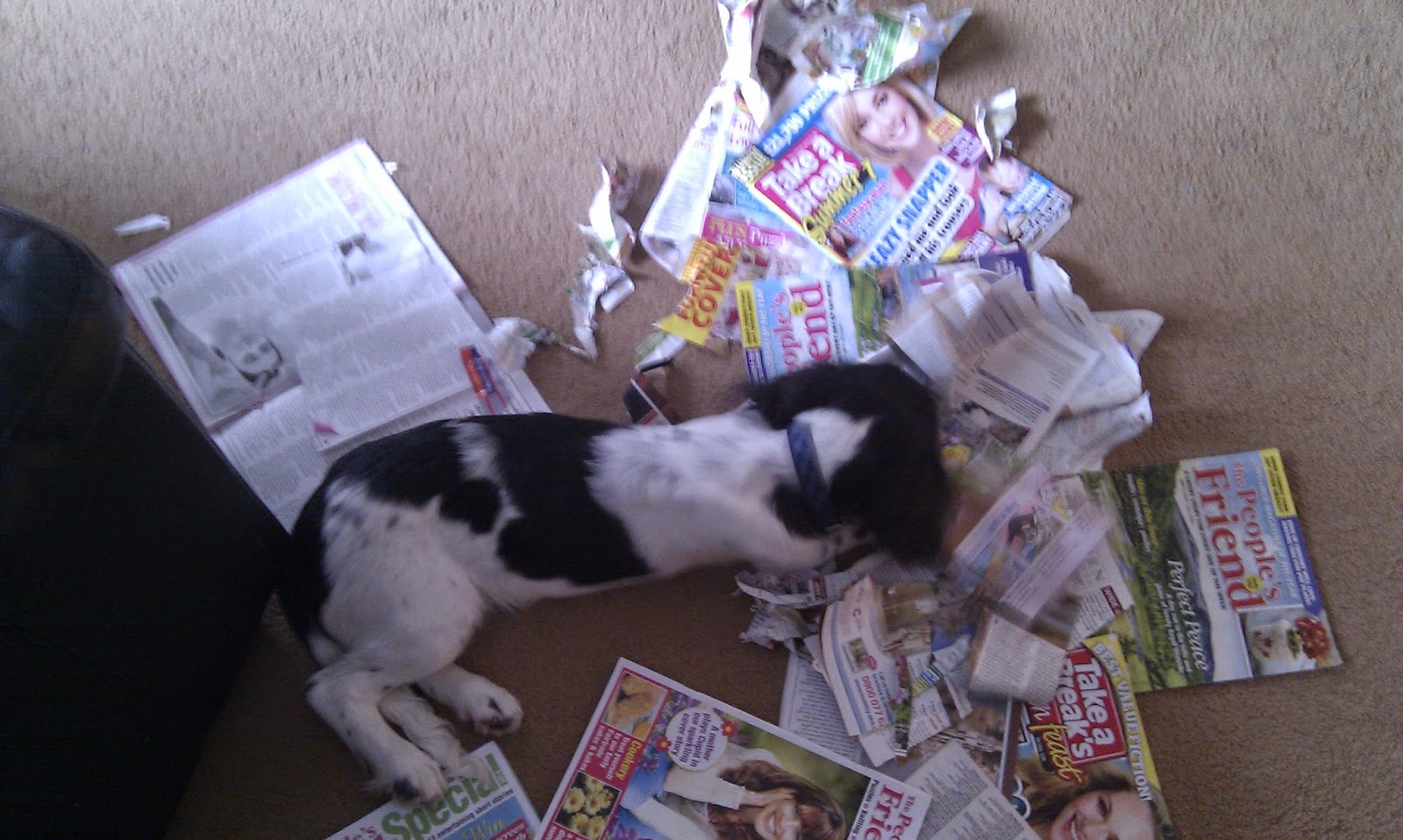 Not that I am complaining about them being keen on their food. Very glad they are.

His routine has varied somewhat over the last few days with more frequent wake up calls during the night due to his poorly tum.

Yesterday he started the day by falling off my bed and landing in a whimpering heap. Luckily we already had a vet appointment booked as now we had a limp to worry about as well as poorly tums. So no walks for him in case he’d damaged something.

Vet checked Harley and Dusty, listened to their tums, gave them a good feel and took their temperatures (which did not go down well with either of them). He didn’t see any point in sending off the poo samples I’d so diligently collected and gave them both a probiotic to take for three days.

Then he checked Dusty all over and said there was no sign of fractures. He watched him walk and said it was a soft tissue injury and he’d probably be all right by today. He’s still limping though, but better in himself and I’m encouraging him to rest, but it’s not easy!

We have to go back if things don’t settle down and perhaps take another sample – oh joy! So far so good – they both seem much better. I have a feeling we’ll be going back about his limp though.

As I wander round the garden in the early hours, I remember the mad old cat lady who used to live near us. The one that used to wander round in her nightie in the middle of the night and I am afraid – I am very afraid.
Posted by Teresa Ashby at 11:12 38 comments:

Dusty’s enjoying his jaunts to the beach – even falling head first into a gully and disappearing under the water to get his tennis ball back didn’t bother him (scared me though!).

I took some photos the other day (with phone so not so good) – the wind was blowing hard, taking up the surface layer of dry sand – it gave my photos an odd effect. It also stung! That's his tennis ball he's gnawing on. Letting him carry that stops him picking up dead crabs and other such unsavoury items! 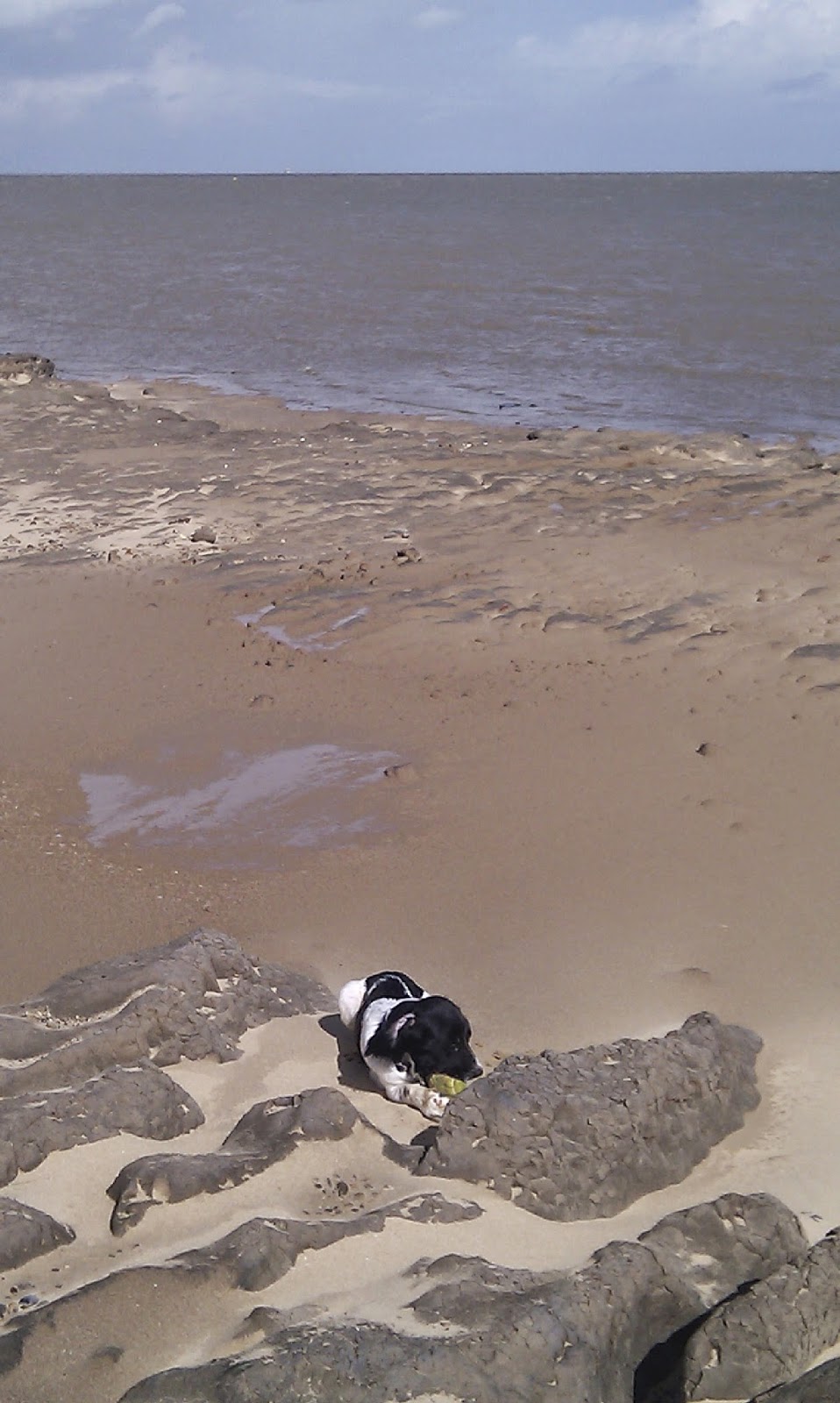 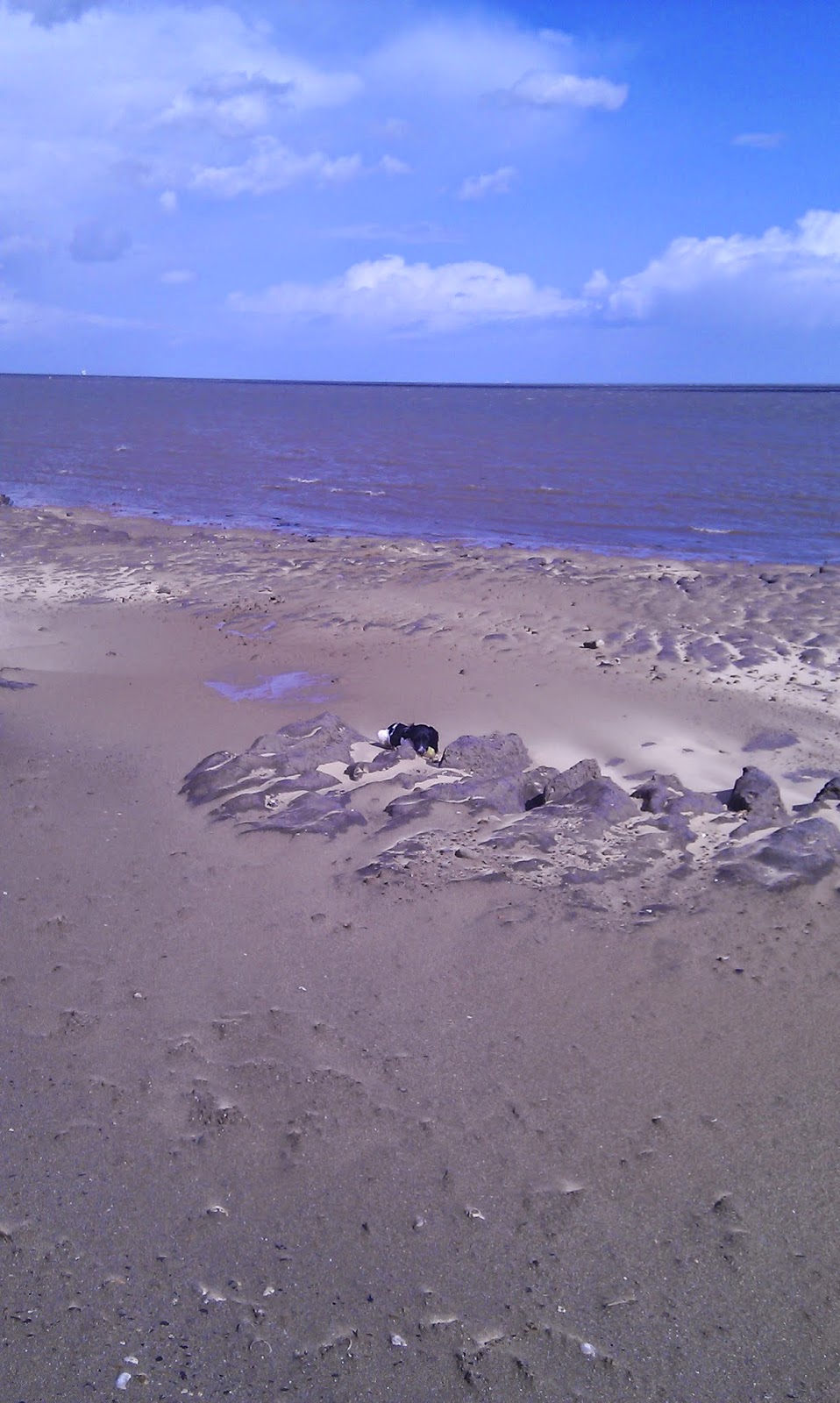 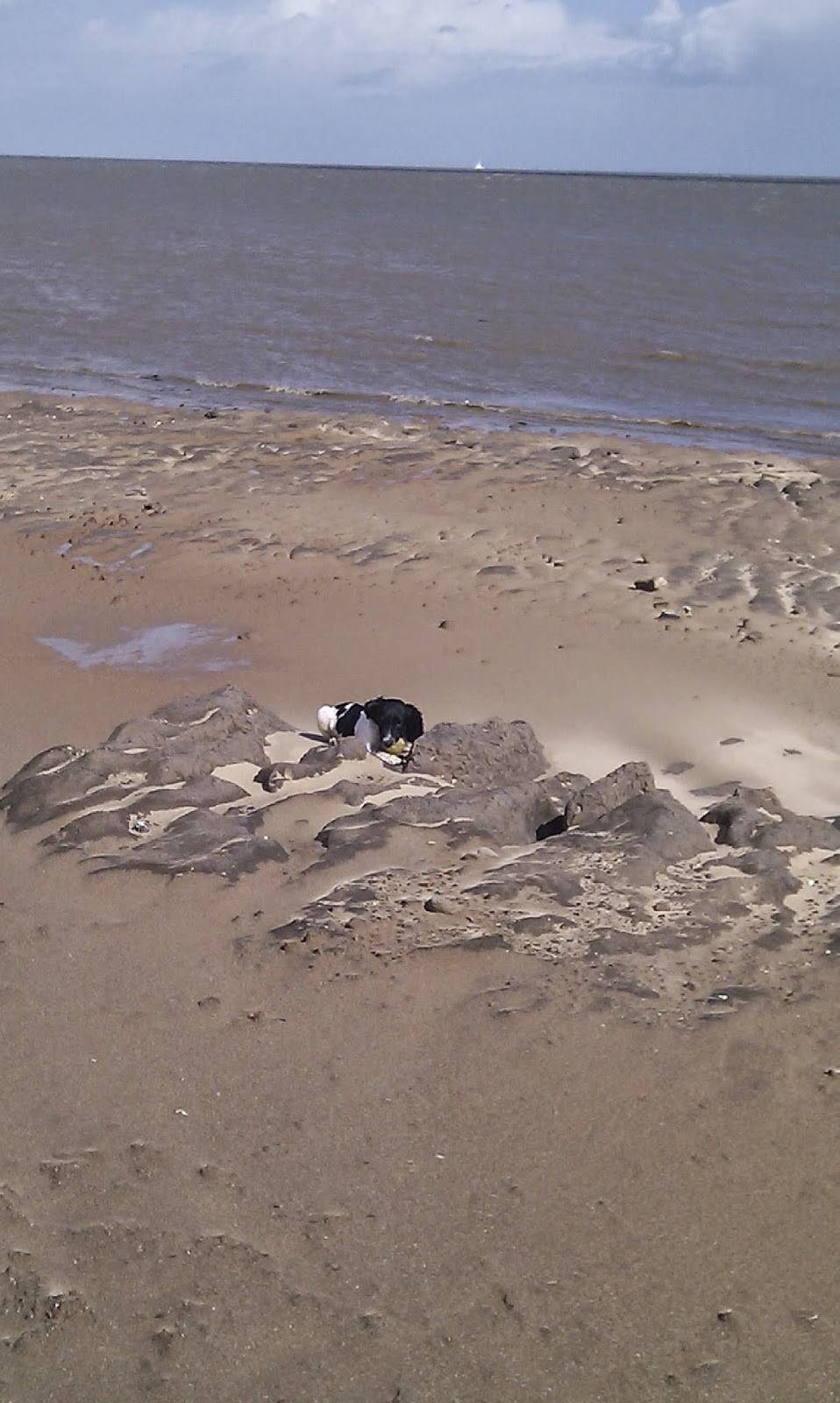 When he's older, we'll be able to walk him to a beach further away, but it's too far for his little legs as yet.

Dogs aren't allowed on the main beach in summer season so this is the one we go to at the moment. I like the sky in this picture. 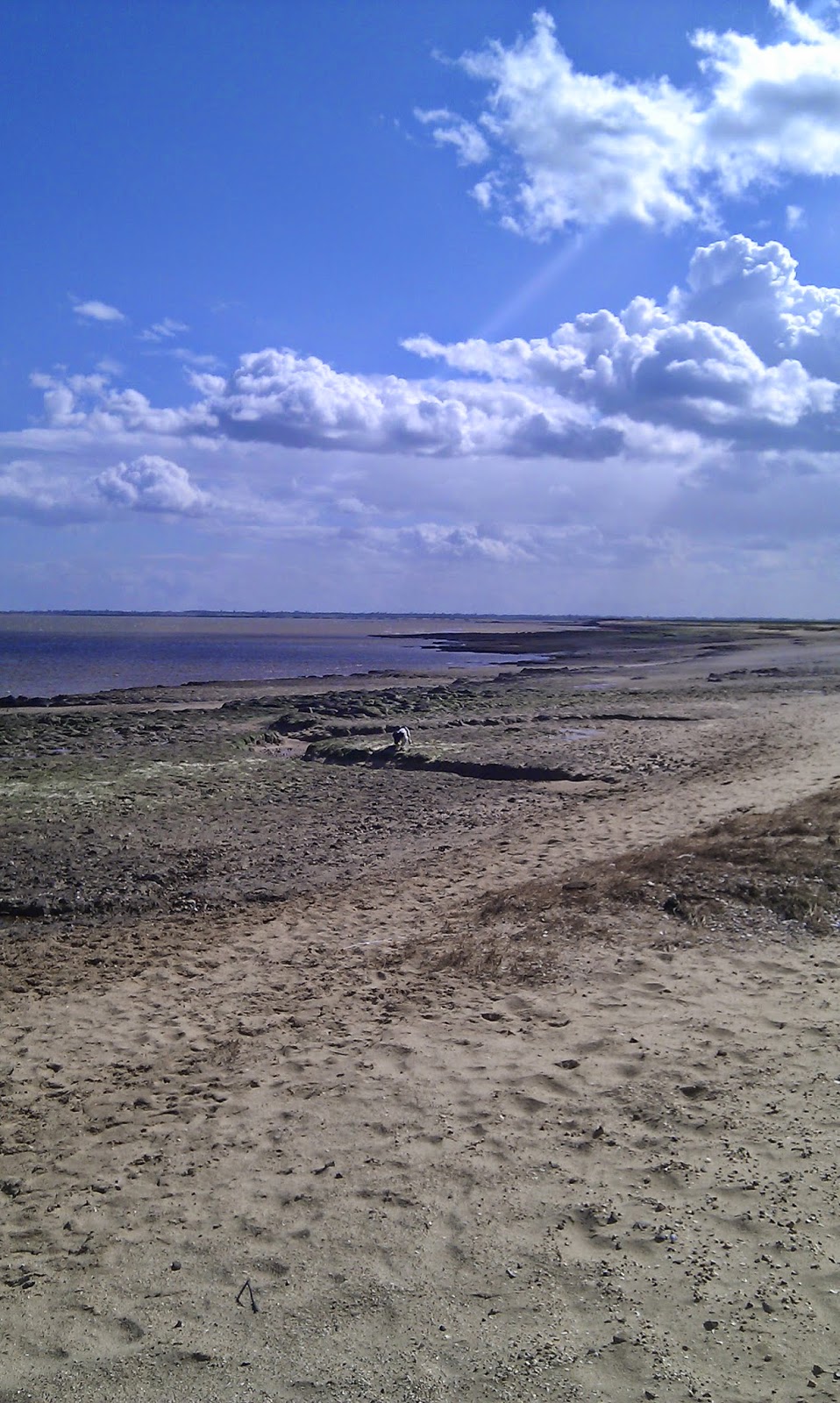 Socialising is going very well. He’s met so many new friends now and although he usually licks their faces then rolls about on his back – or gives them his tennis ball – he doesn’t yelp and carry on any more and he’s always keen to say hello.

It was quite funny seeing him rolling about in front of a tiny Chihuahua which wasn’t much bigger than his head. I think the little dog was quite pleased though – he looked as if he felt ten feet tall as he pranced off.

Harley, who never really had much to do with Dusty (unless she was pinching his food) has been super affectionate to him. When we come back from our walks, she rushes up to rub noses with him making her funny little chirping noises. And they go in and out of the back door together. She’s even started hugging his head and biting his face – which although it sounds alarming, is a gesture of affection (or so she says!).

They’re both off to the vet tomorrow – their tums have been unsettled and I have to take in samples of poo for testing. That should be … interesting.

Thank you all so much for your kind words about Fizz - life isn't the same without her, that's for sure xx

I can’t believe I’m writing this. Fizz didn’t come home for breakfast yesterday (6th May) and I mentioned I was worried on Facebook. Danielle from Paws and Mittens (the cat rescue Harley came from) had had three calls about a dead cat in a road near us and she saw my post and called to let me know. It must have been such a difficult call for her to make. She knew from the description she’d been given that it must be Fizz.

Fizz always went out last thing at night, then came in when I got up with Dusty and spent most of the day sleeping on my bed. She lived life to the full, loved the life she had and filled our hearts.

A man had kindly picked her up out of the road.

Such a huge personality, it’s hard to believe we won’t ever see her again playing in the spray from the hose or sunning herself on the trampoline. Dusty is so quiet and sad and Harley keeps looking round the garden or sitting on the back wall keeping watch and just seems lost.

All I can think is that she’s snuggled up with Indy now, all curled up in his soft fur like she used to when she was little.

These are the last photos taken of her at the weekend with Dusty sharing her sunny chair with him. 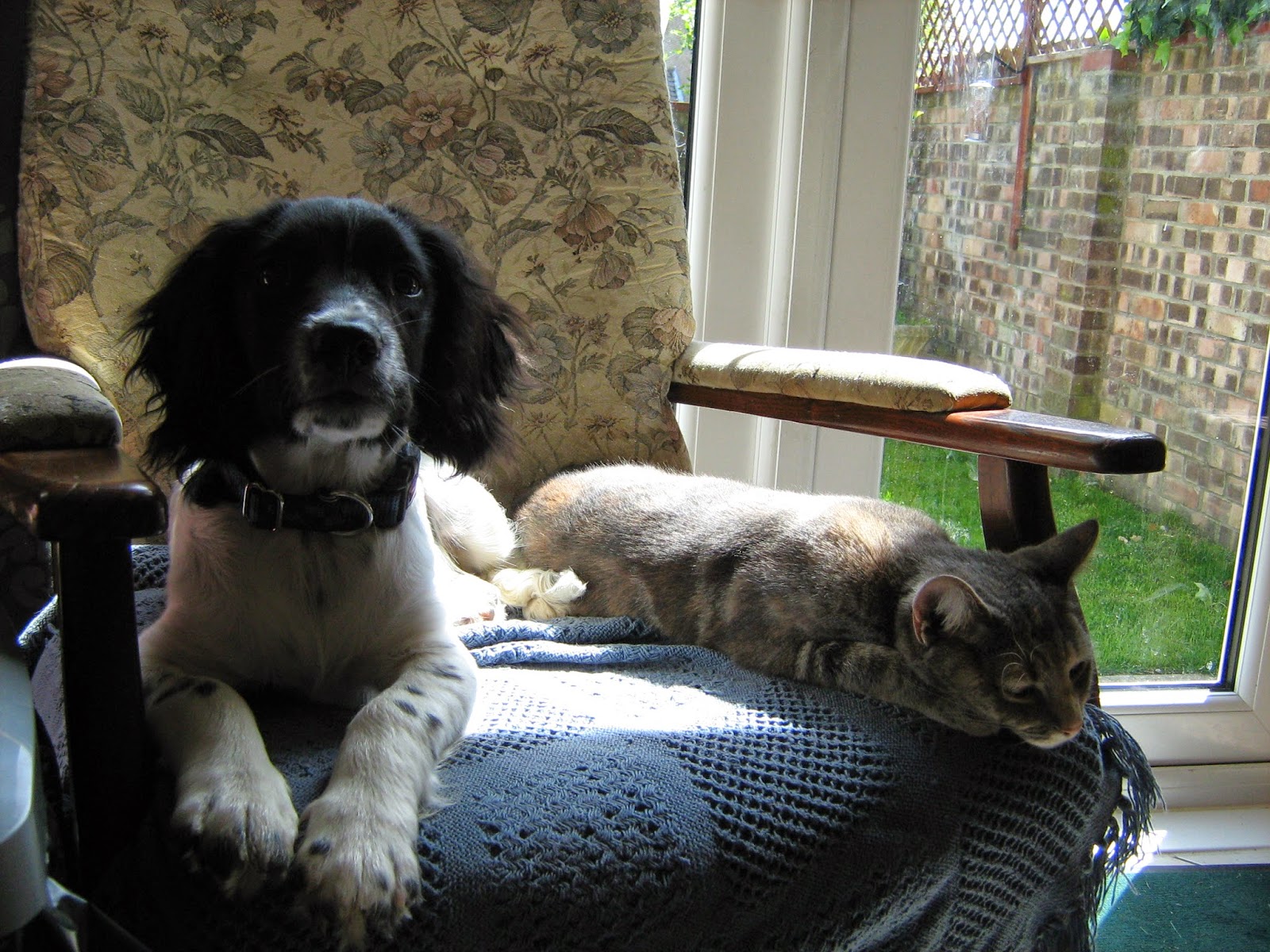 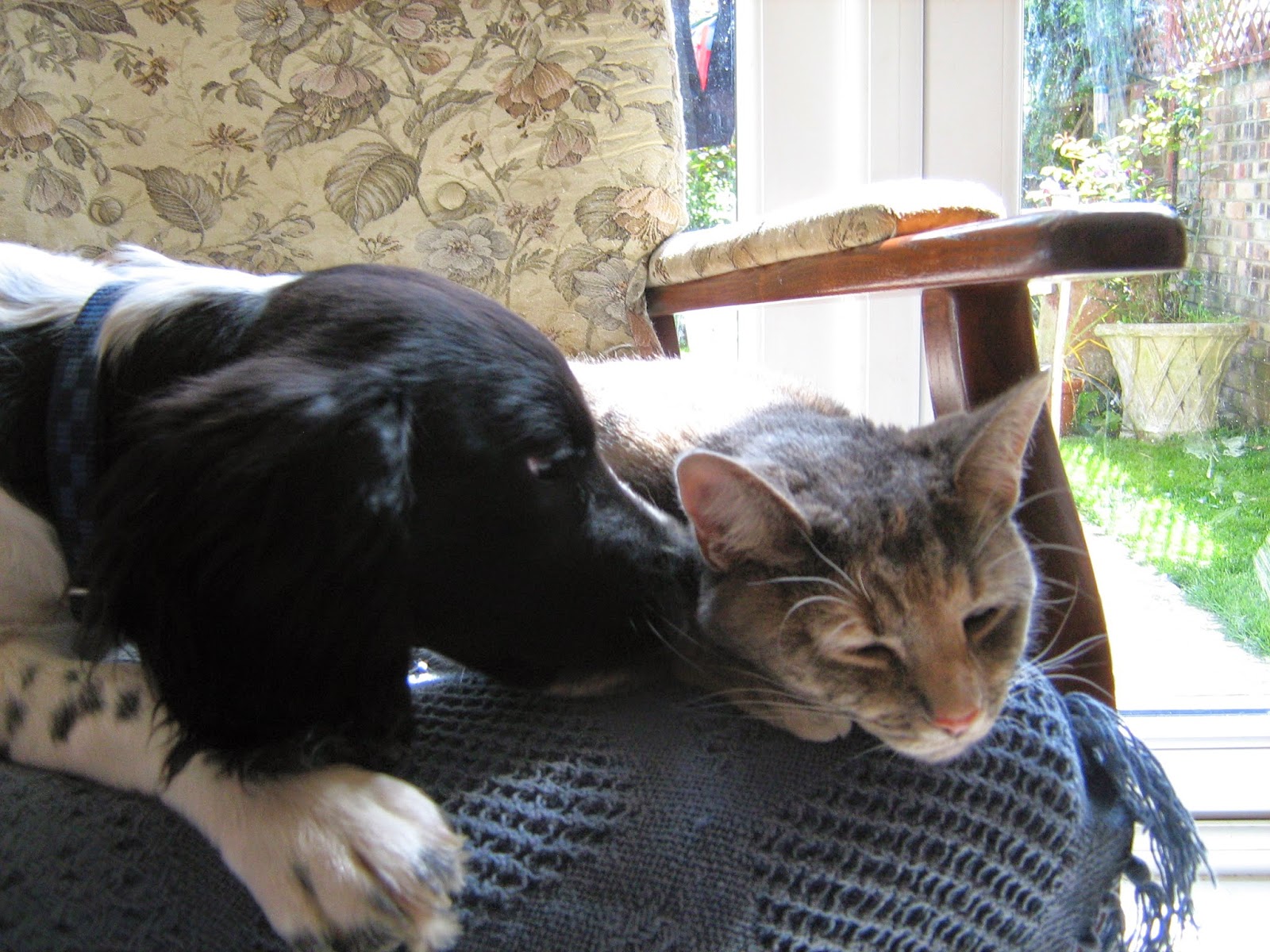 My youngest grandson who is three has discovered the power of that word. You know the one. The one we cherish because it means they’re curious about the world around them and also dread because sometimes we just don’t have the answers.

“Look, there’s a big black slug.”
“Why?”
“How do you mean?”
“Why is it a slug?”
“Er, because it’s not a rabbit?” That was a pathetic answer from a grandmother who should know better. He didn’t find it funny. 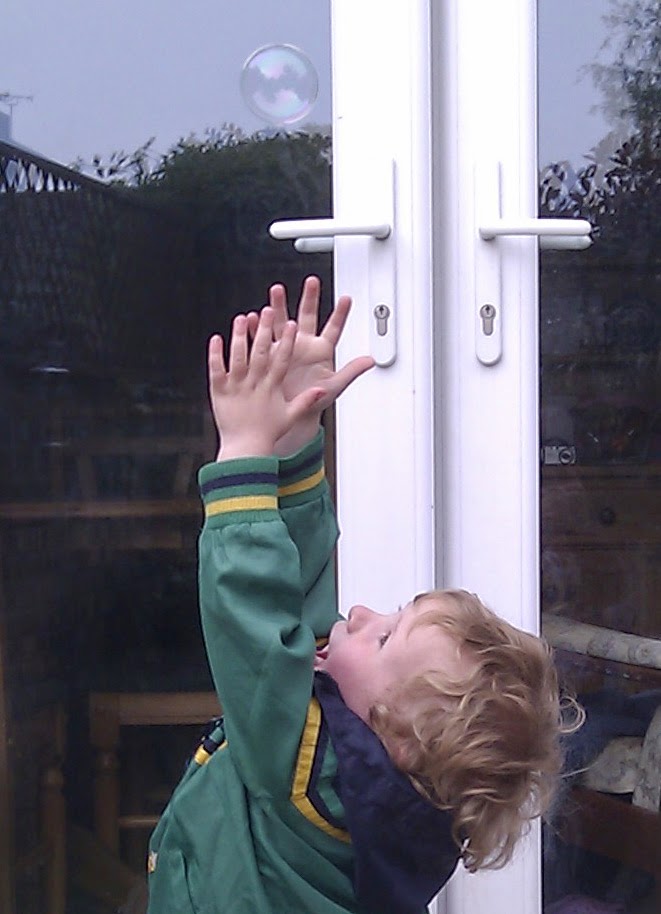 As well as questioning everything, he is also very perceptive. The other day when we were out with Dusty, he said to me, “You miss Indy don’t you?” I do. Every day. I’ve never said so to him, but he knows anyway. I suspect because he misses him too.

And on Tuesday, he made my day. He came into the kitchen and just said, “I love you.” Then he gave me a big hug. That made me cry – it also made me smile. Lots.

Indy and Tilly would have been fourteen today. I still ache for them, but every day Dusty reminds me of things they and Sweep used to do, even if it’s a case of saying, “Indy would never have done that!” (Running through mud). Or, “That’s such a Sweep thing to do!” (Always wanting to carry something). Or, “That look in his eye is exactly like Tilly!” (When he's planning his next move). He’s brought back so many happy memories – more than I would have thought possible and it is lovely to remember the good times and smile.

May giggles with Susan JaneJones, I Should be Writing and The Busy Teapot.