I can’t believe how much Dusty’s grown. Neither can poor Fizz. She says she’s sure he didn’t used to weigh half a ton when he jumped on her. I was feeling sorry for her, thinking maybe she wasn’t enjoying the rough play, until the other night in the garden when she crept up behind him, grabbed his backside with both paws and bit his bum!

He’s met a few more dogs off the lead and every time he whimpers and yelps and hurls himself at the feet of the owners waving his legs in the air. Usually they oblige and give his tummy a tickle and occasionally they’ll give him a treat. Hm, I wonder how scared he really is. Maybe he’s just figured out the minute he goes all loopy people make a big fuss of him!

On Sunday he met a new little dog. She ran up to him barking, wanting to play and he did his usual wimp act. The owner was ever so apologetic and said she hoped it wouldn’t give him a complex. I had to explain that he always acts like that and her dog had done nothing wrong.

He loves to have something to carry as we walk along, so I let him have the tennis ball. It stops him picking up stones and other such undesirables! 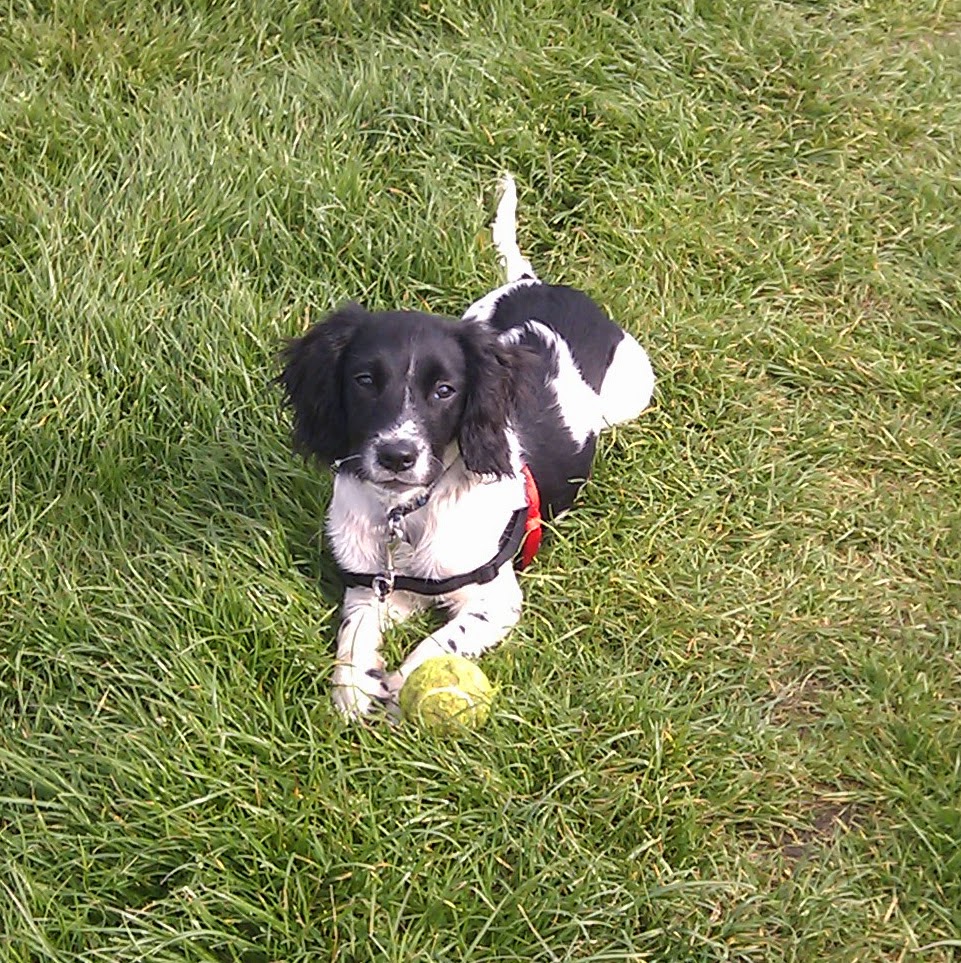 He found his first stinky ditch yesterday. I thought we’d have to fish him out, but he managed to get out on his own – and back in – and out – and in – and out…

There are a lot of these down near the marshes. No, not the rape fields, although there are quite a few of those which make for sore throats and tight chests (especially when you take the path right through the middle of one – I won’t be making that mistake again). I mean the webs in the bushes. 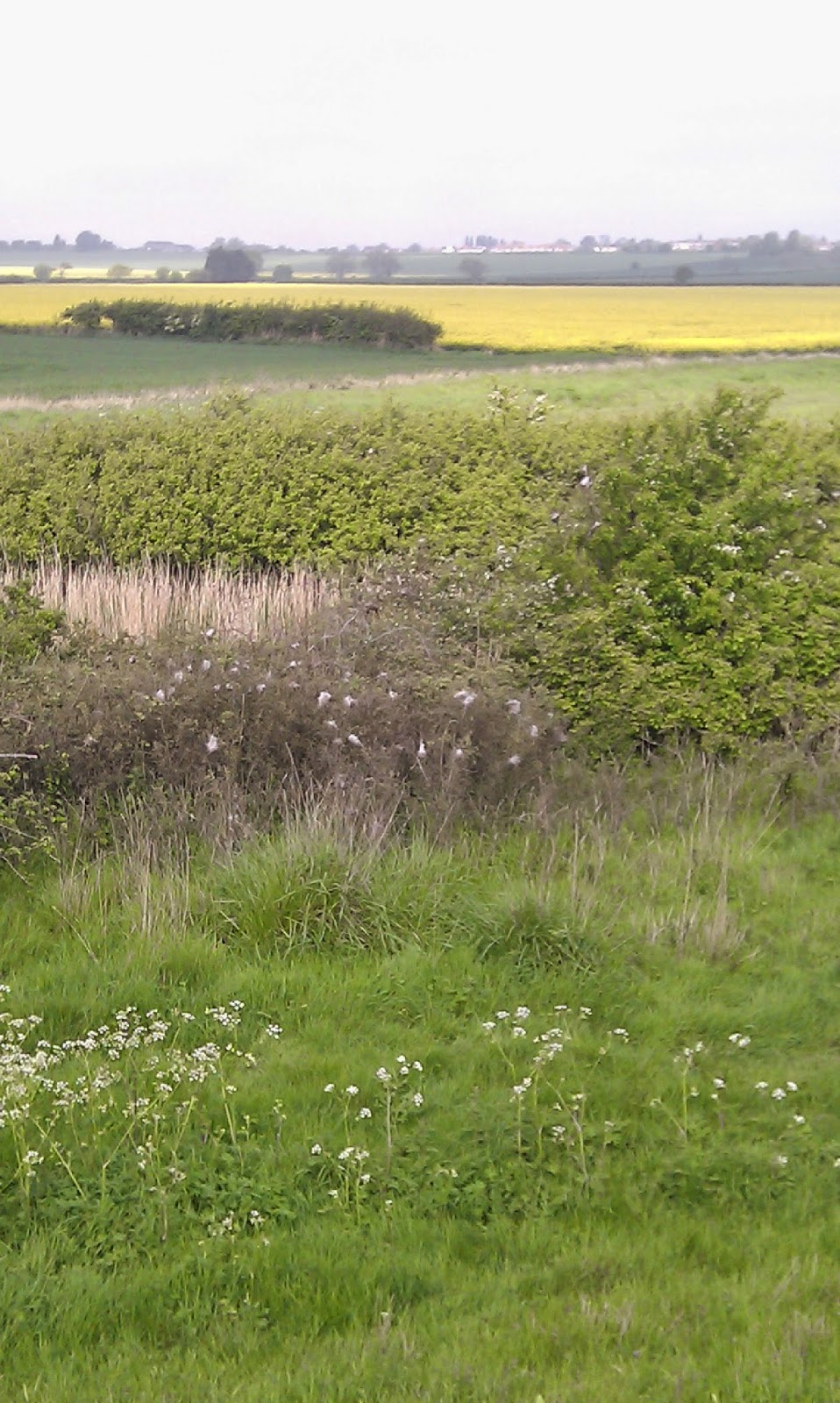 Some more – a bit closer. 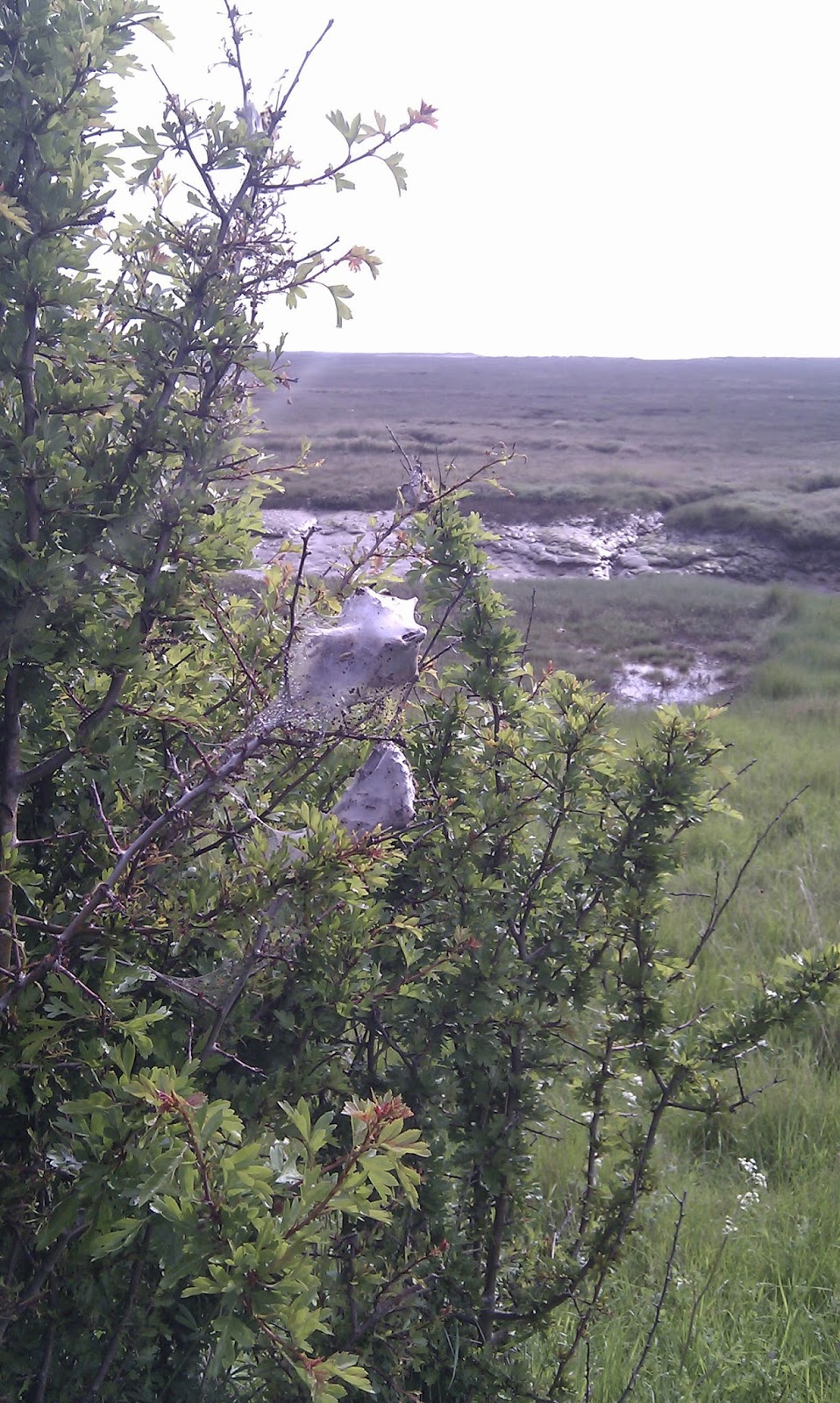 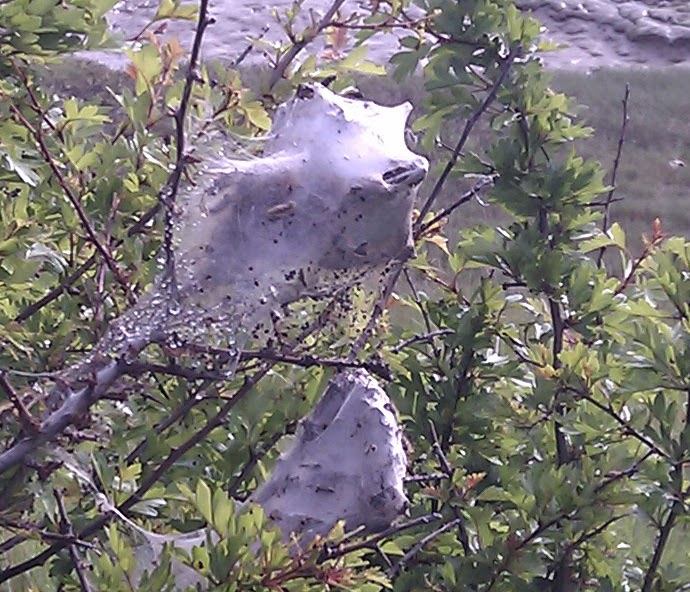 They are the caterpillars of brown tail moths I believe and not to be messed with!

Laughing my head off!

Dusty – or as my mum affectionately calls me, Dustbin (I don’t know why) - here. 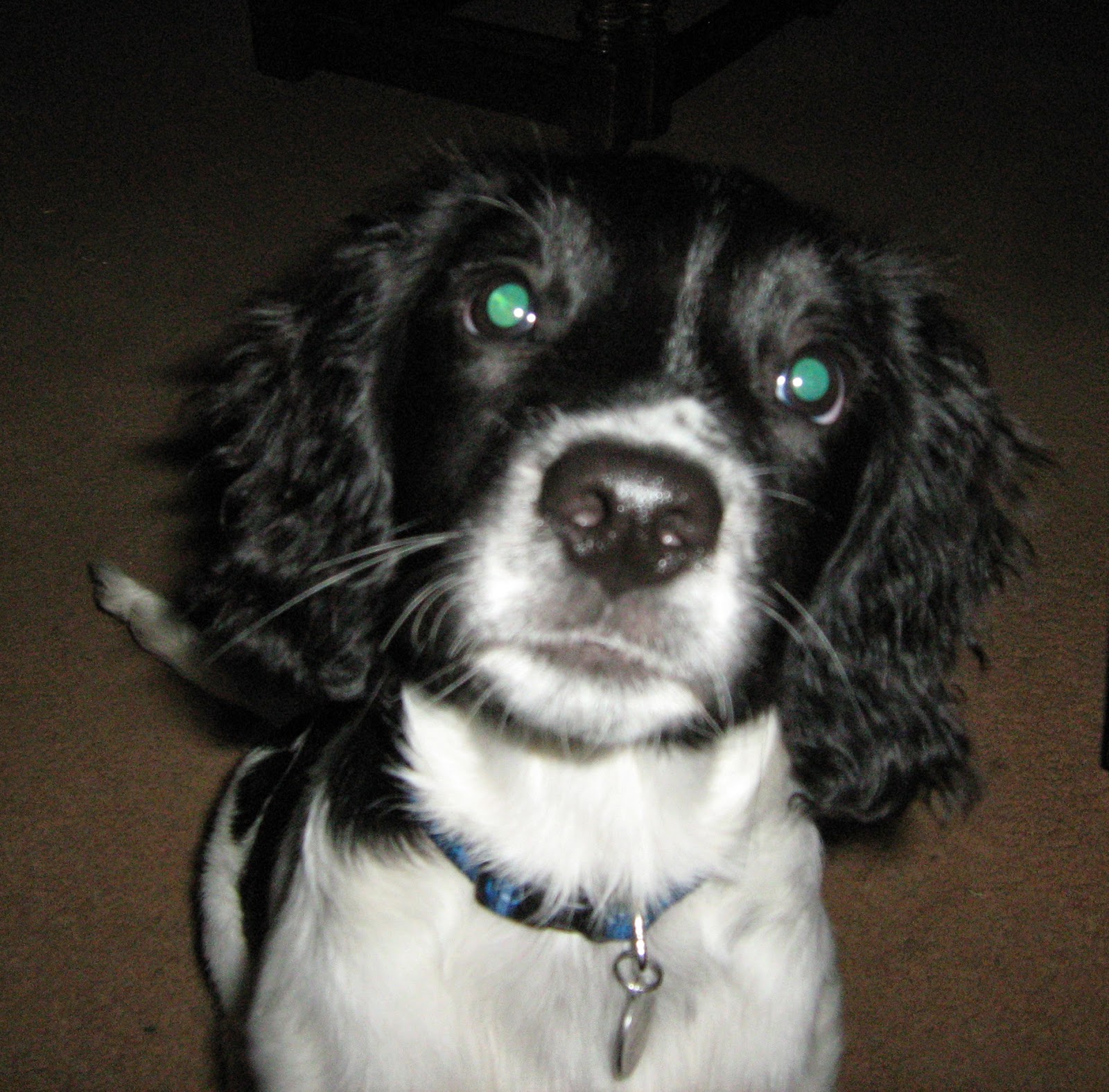 Apparently I have slept through for three nights on the trot until 5am. My mum is beyond herself with happiness about this for some reason. I thought she enjoyed our twice nightly excursions into the garden.

For the past week I have mostly been jumped on by a big white dog the size of a polar bear (Mum said it looked like a doodle, whatever that is) which scared me so much, I ran and hid between two beach huts and cried and yelped until my mum rescued me. 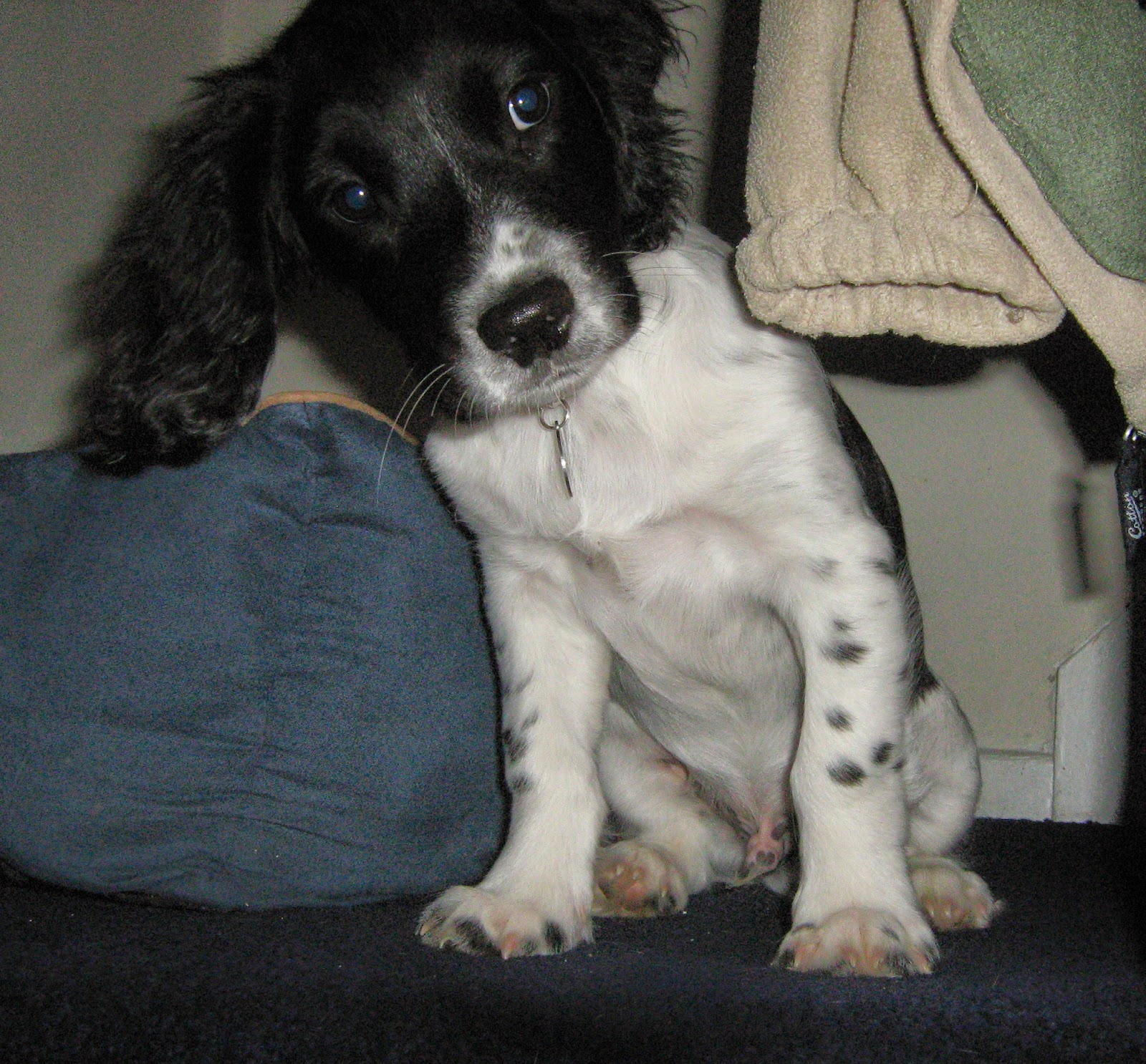 The lady with the big white dog thought it was hilarious. My mum didn’t.

Straight after that I met a very nice lady with a very gentle little dog who said hello to me and told me not to worry, not all dogs were going to jump on me.

Now I think every dog I see is going to flatten me so I try to hide, but I have met a lot of lovely dogs – another huge Black Labrador (who I liked), a cocker spaniel (who I loved) and five dogs all at once that were very well behaved and many, many more, but I can’t get that white dog out of my head. I think he might be a ghost.

I help with the washing up. Yummy - the kids had pancakes for breakfast methinks. 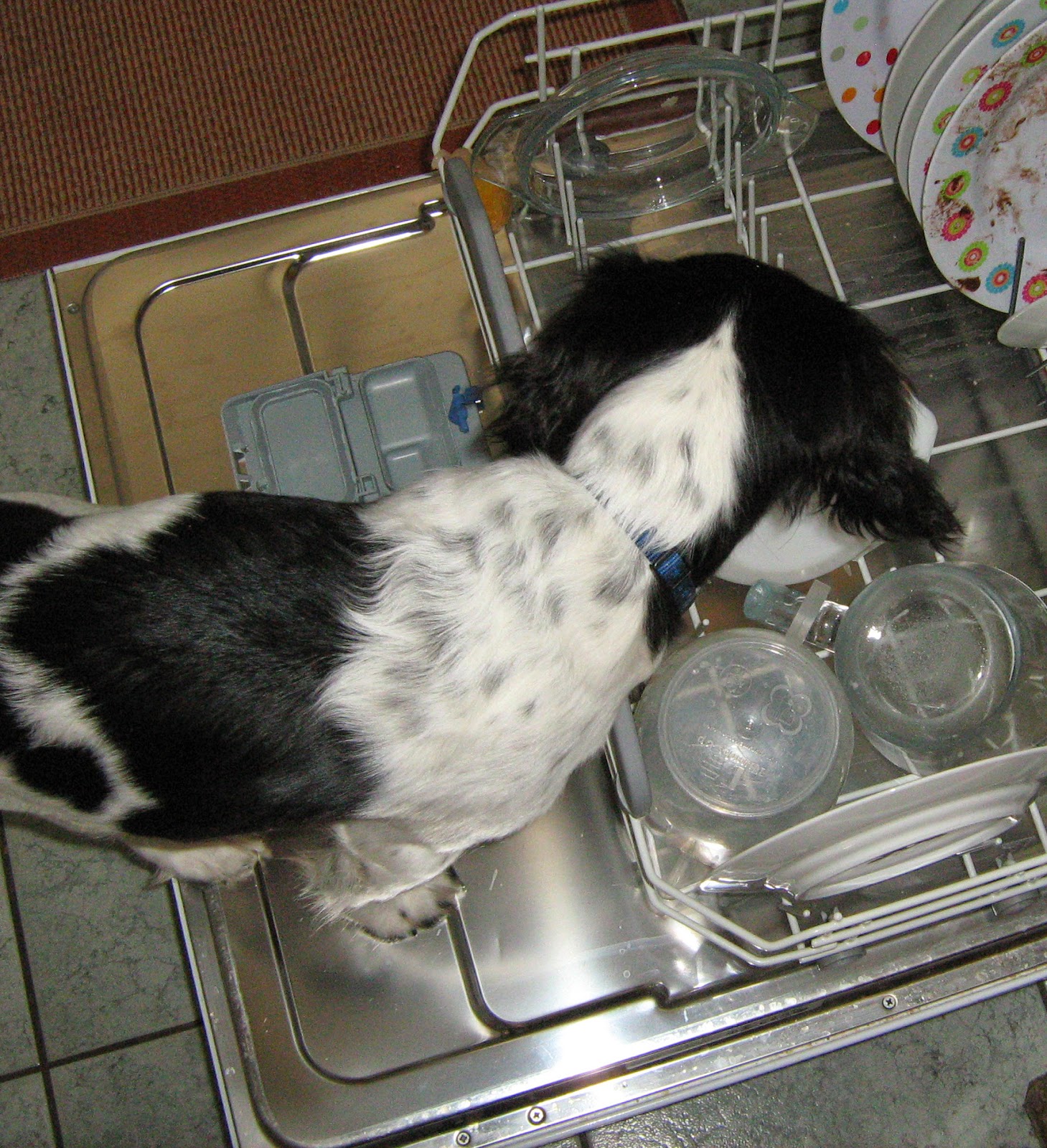 I have been for my first walks in the woods, but I’m not allowed off the lead in there yet in case I get lost. 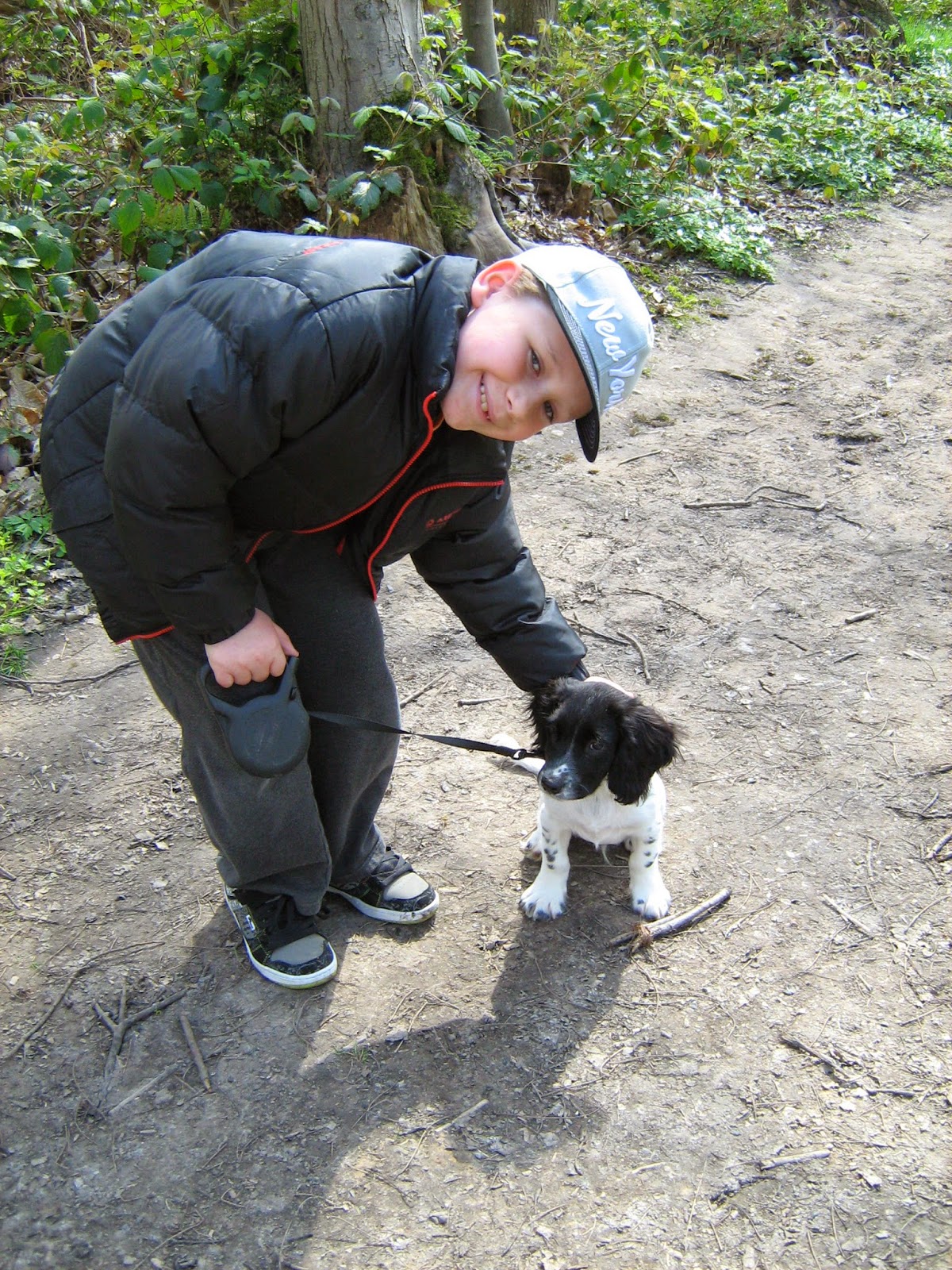 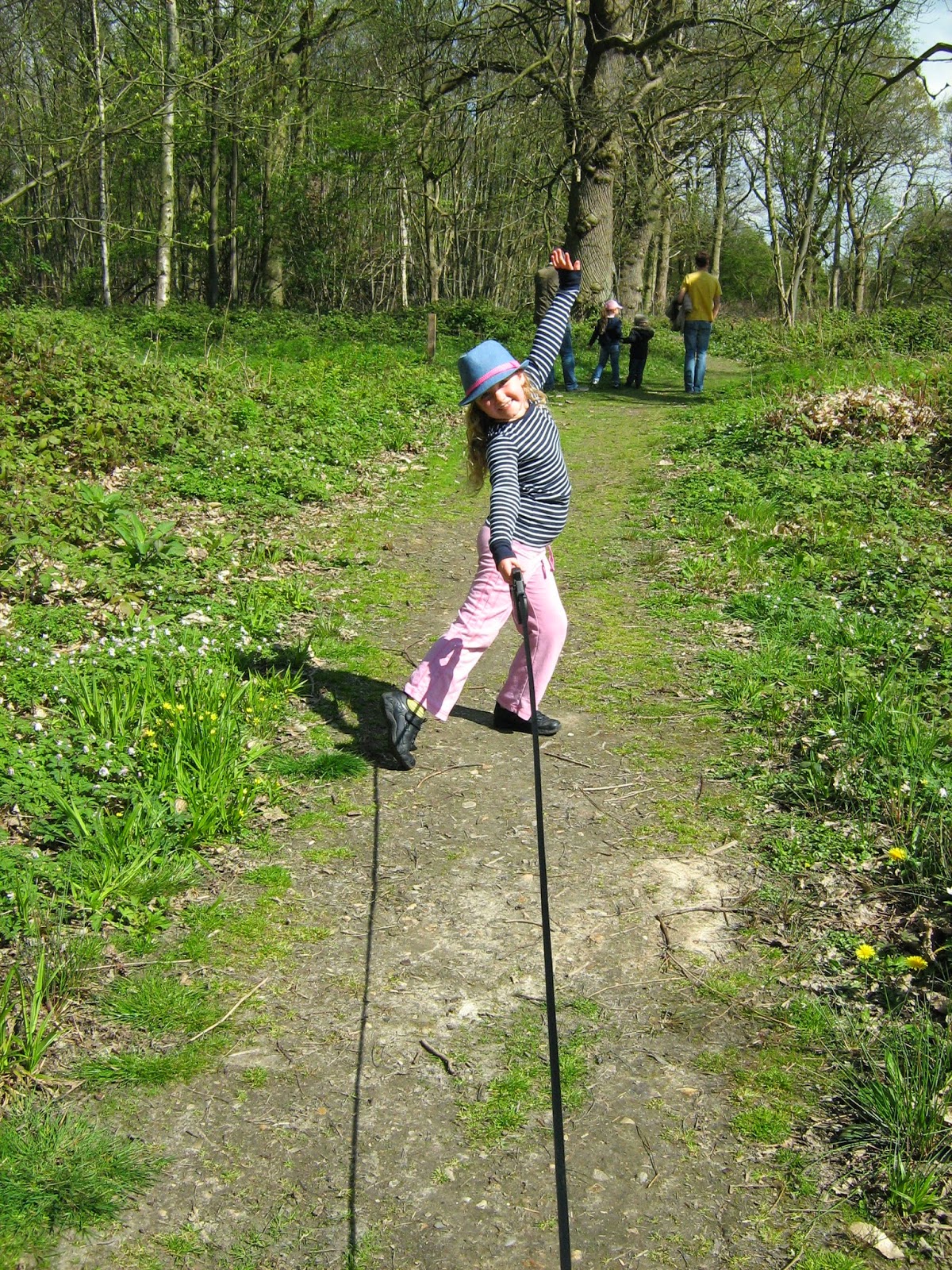 And I love doing puzzles, specially when they have food in! 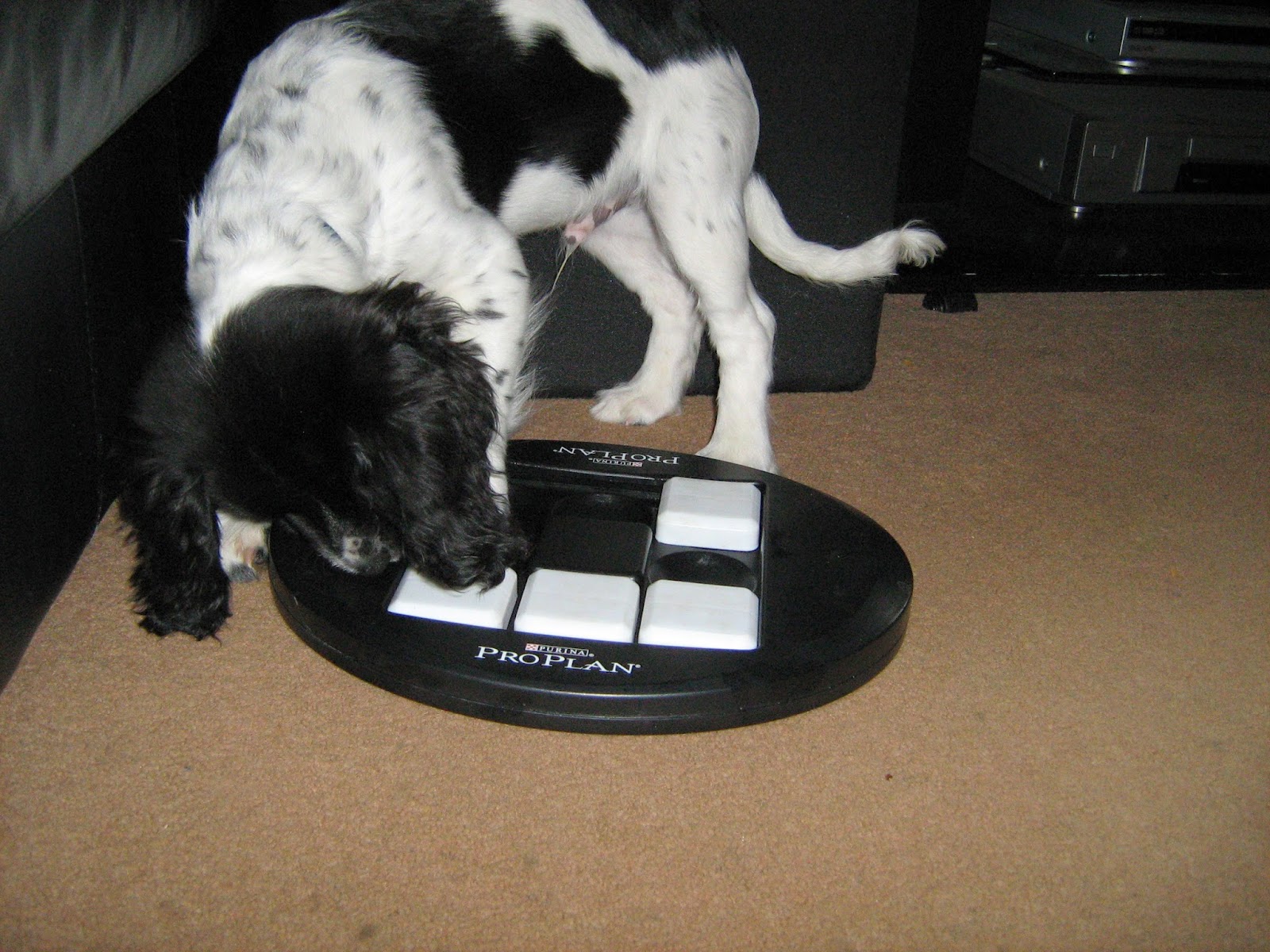 Also this week I have mostly been eating cat poo which makes my mum go all red and jump up and down with glee. At least I think it’s glee making her squeal while I do a victory circuit round the garden laughing my head off. 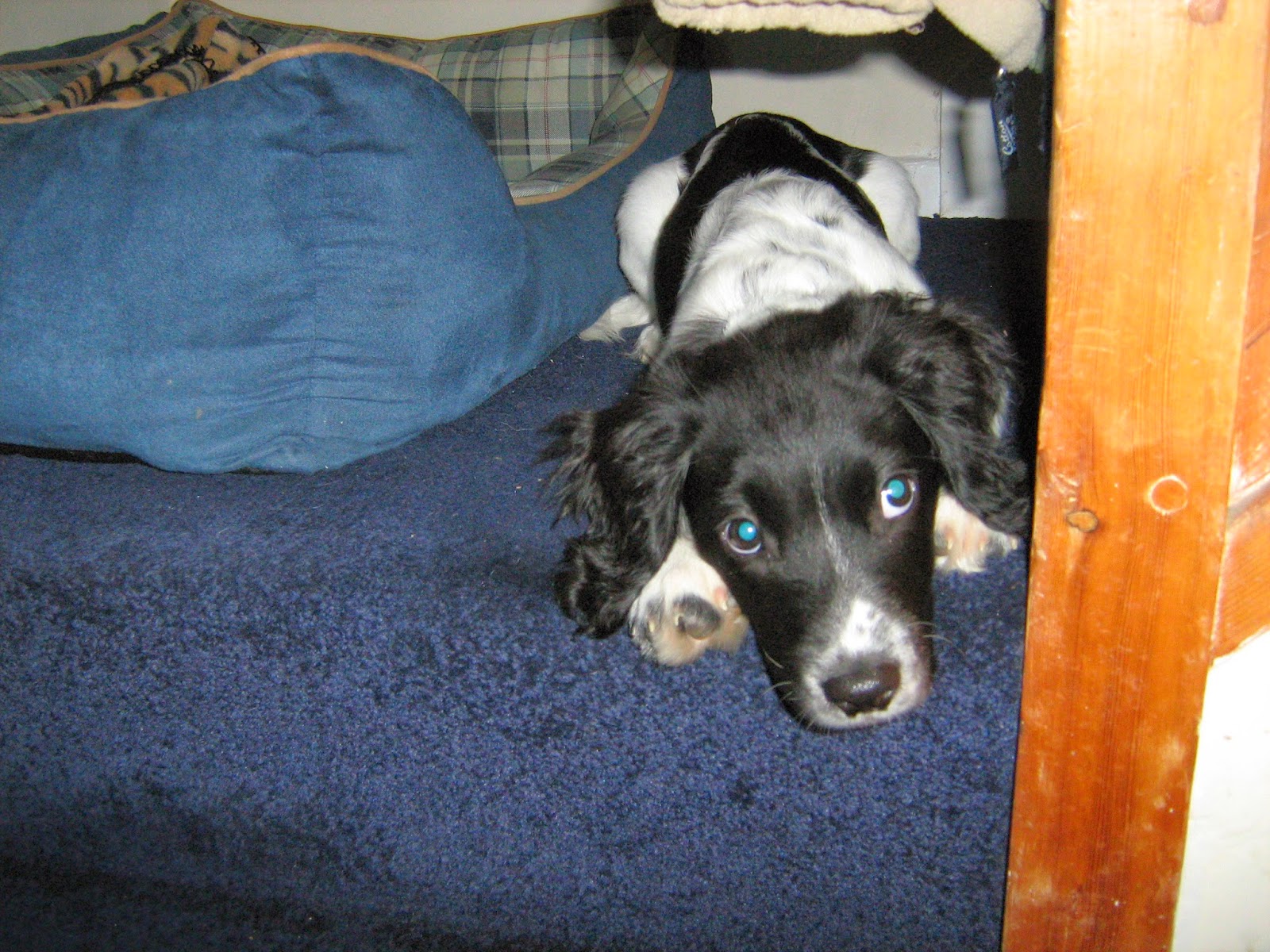 I have destroyed a whole new box of man-size tissues – whatever that is. I also discovered soft white paper dangling in the bathroom which was fun because when I grabbed it, it chased me all over the house until Mum tore it and stopped it chasing me. Humans eh? 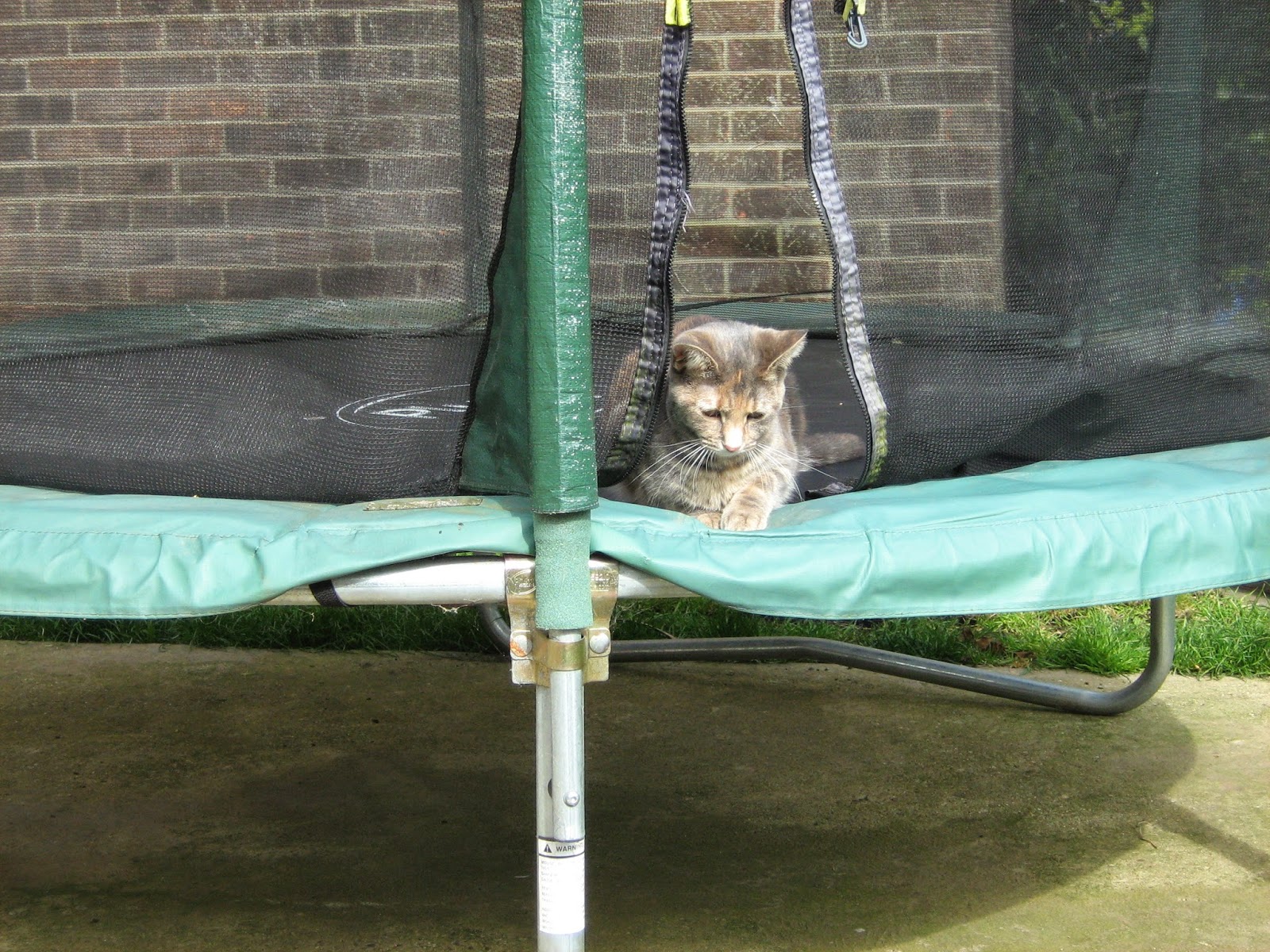 Fizz here. Mum says I am now a year old and no longer the most violent pet in the house. I am getting really mellow. I play with the dog-toy she brought home for me and I never use my claws. My favourite spot in the garden is in the trampoline where I can relax in the sun while the dog-toy runs round the garden laughing his head off and Mum cheers him on. At least I think she’s cheering him on. I knock things on the floor for him that he can’t reach and Mum goes, “Humph!” and picks them back up again. Like all the stones he keeps finding that she puts in a bag for the tip – I’m always giving them back to him and she’s always, like, “Fii-iizz!” Humans eh? 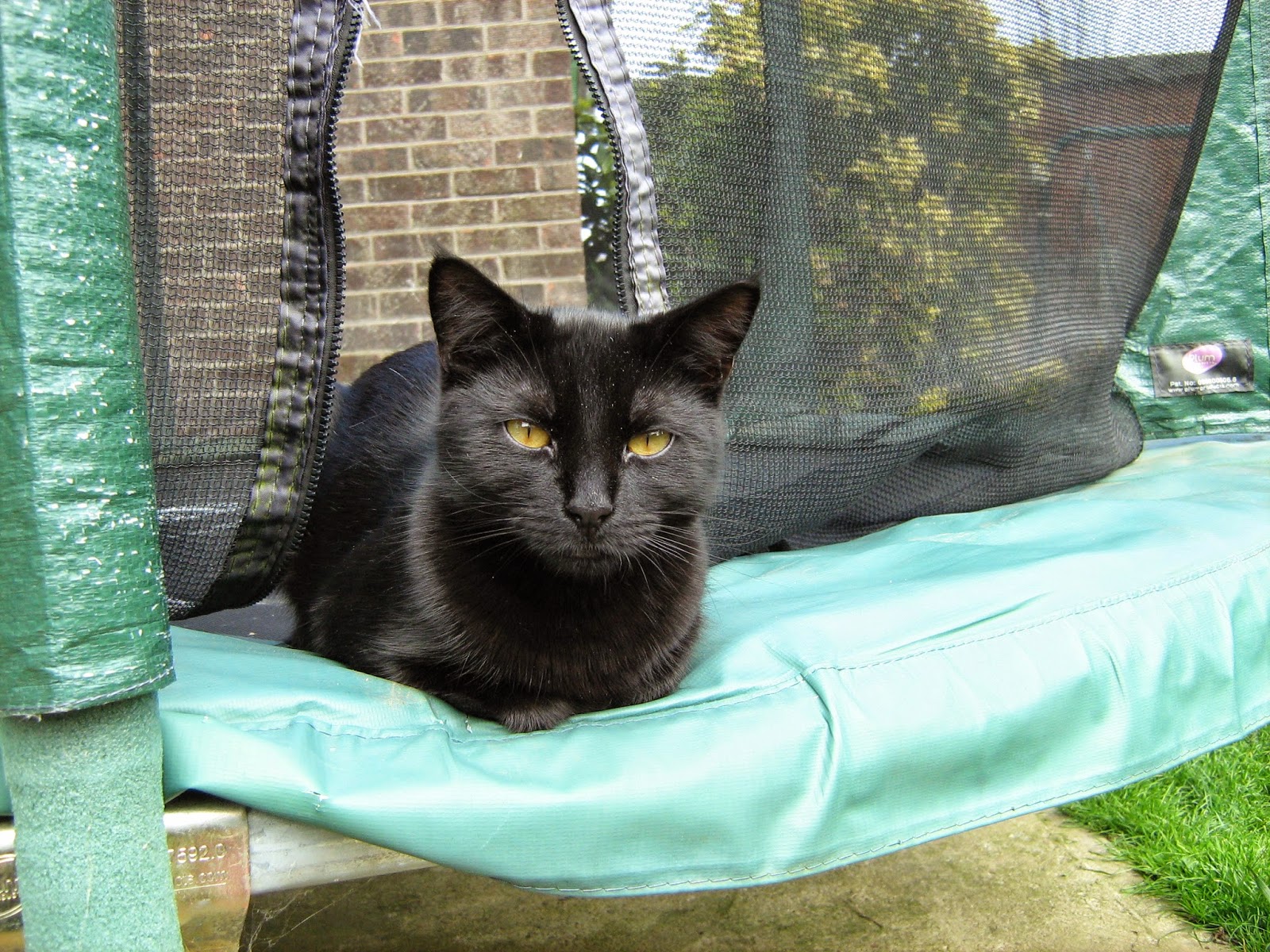 I’m Harley. I like the trampoline too and climbing up the tree and hanging with all the local cats and jumping over the fence and tuna and catching flies. I don’t play with the dog-toy so much, but I do like to eat his food if I can get to it before he snaffles it all up. I also knock things on the floor for him that he can’t reach. Mum keeps saying to me, “Harley, please use the litter tray,” which is mad because a few months ago I’m sure she said, “Hooray, the cats aren’t using the litter tray any more.” Humans eh? 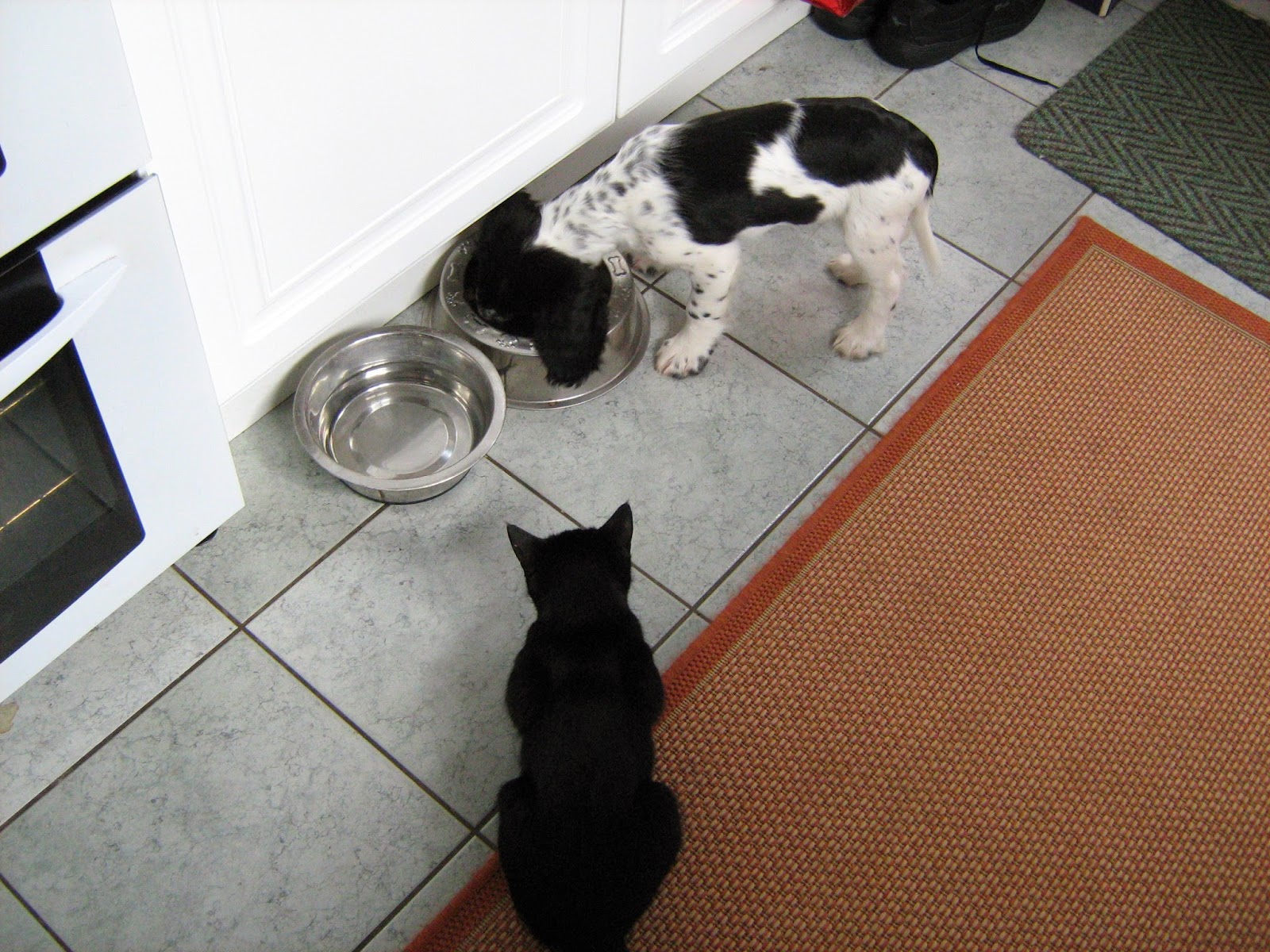 Visiting, I Recommend and The Small Adventurer!

Visiting:  Lovely Susan Jane Jones, founder of the monthly Giggle Blog, features an interview with a People’s Friend writer every month and this month it’s me! You can read the interview here.

I Recommend:  If I am ever asked to name my favourite writers, the late Deric Longden is always very high on my list. I have read and reread his books probably more than any other writer. Deric’s family have put together some of his typescripts into three new collections on Kindle. I knew when I was reading the excerpts on Amazon and I was laughing so much I had tears running down my face that I had to have them. Wonderful writer.

The collections are: RadioTimes: Take 1  Radio Times: Take 2  and  Tailpieces.

Also, Suzanne Ross Jones has a new book out, a sweet romance, It Had to Be You (Kinbrae Kisses) and at the moment it is just 99p.

And if that’s not enough for you, it is now possible to get the late Robert Holdstock’s books on Kindle and I am currently re-reading his Night Hunter series.

Which brings me to…

His most frightening experience so far was seeing a Dachshund barking and nipping at a jogger's legs, then the jogger retaliates with a kick followed by lots of shouting and bad language. Not sure which one he found the most scary - dog, outraged jogger or outraged dog owner!

My most frightening experience… letting him off the lead and watching him hare off.

See that little dot in the distance? 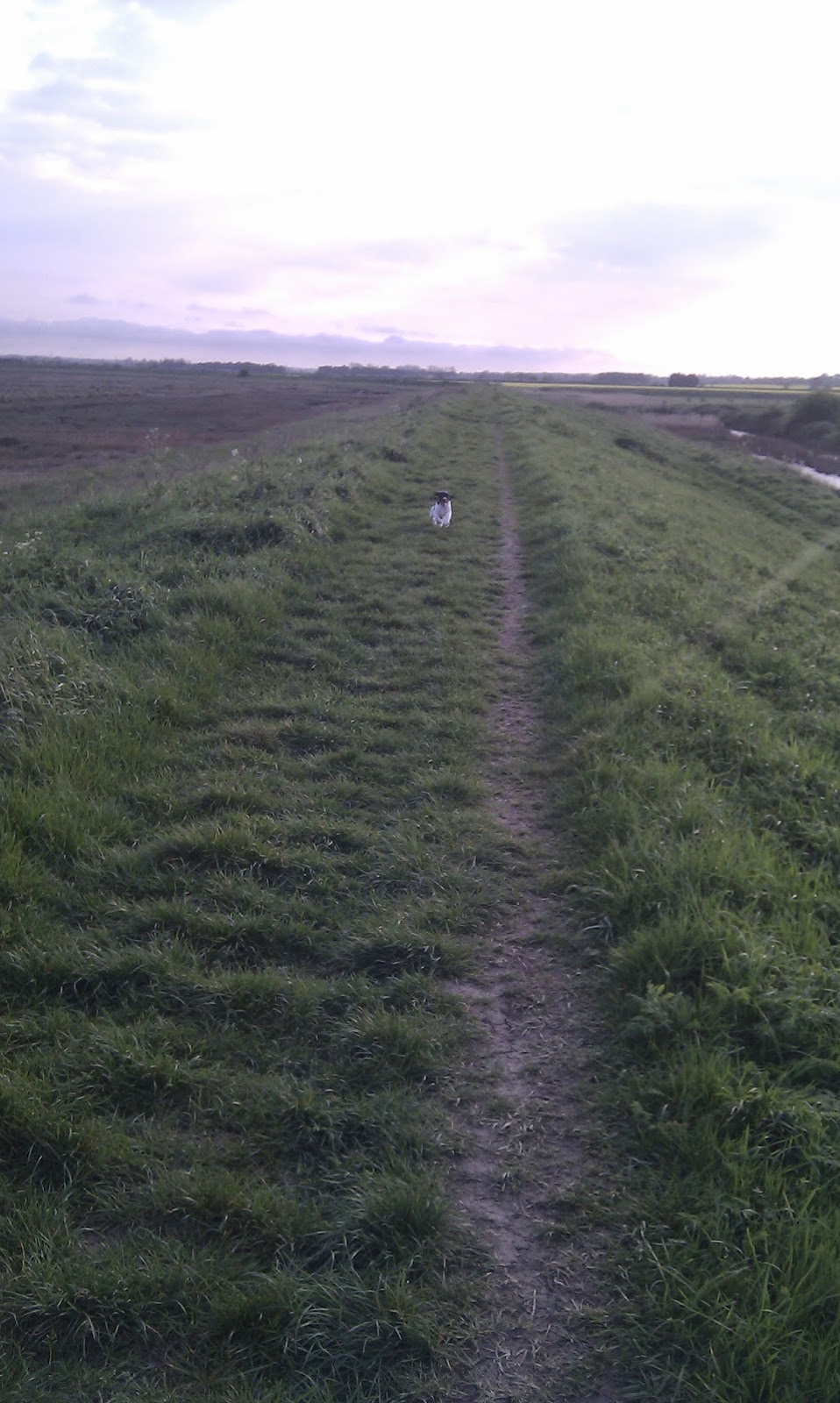 This is zoomed in. At least he’s coming back to the whistle! He’s having a great time, but me – I’m terrified! So many dangers and distractions out there for a small adventurer. 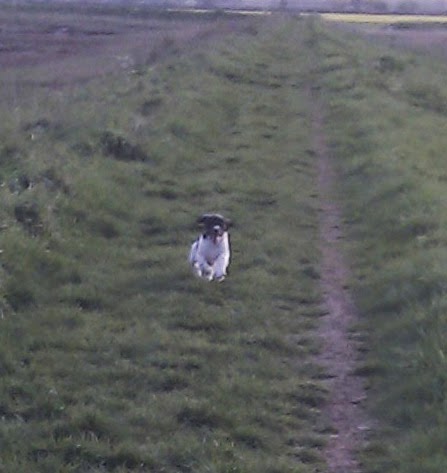 It isn’t funny that they’ve closed our local maternity unit, but it was brilliant to be able to join in a protest march about it.

Beloved didn’t come with me. He stayed home to Dusty-sit. Before I left I said to him, “I’m hoping to get arrested. I think the experience would be good for inspiration.”

He looked so worried, bless him.

I wasn’t arrested of course. It was all very peaceful as it was meant to be. We even made the local news and you can see me in the video if you look hard enough!

Yesterday afternoon I changed out of my dog scruffs into my going-up-the-school clothes and off I went. My 3 year old grandson was playing in the garden so I left him behind (with Grandad). 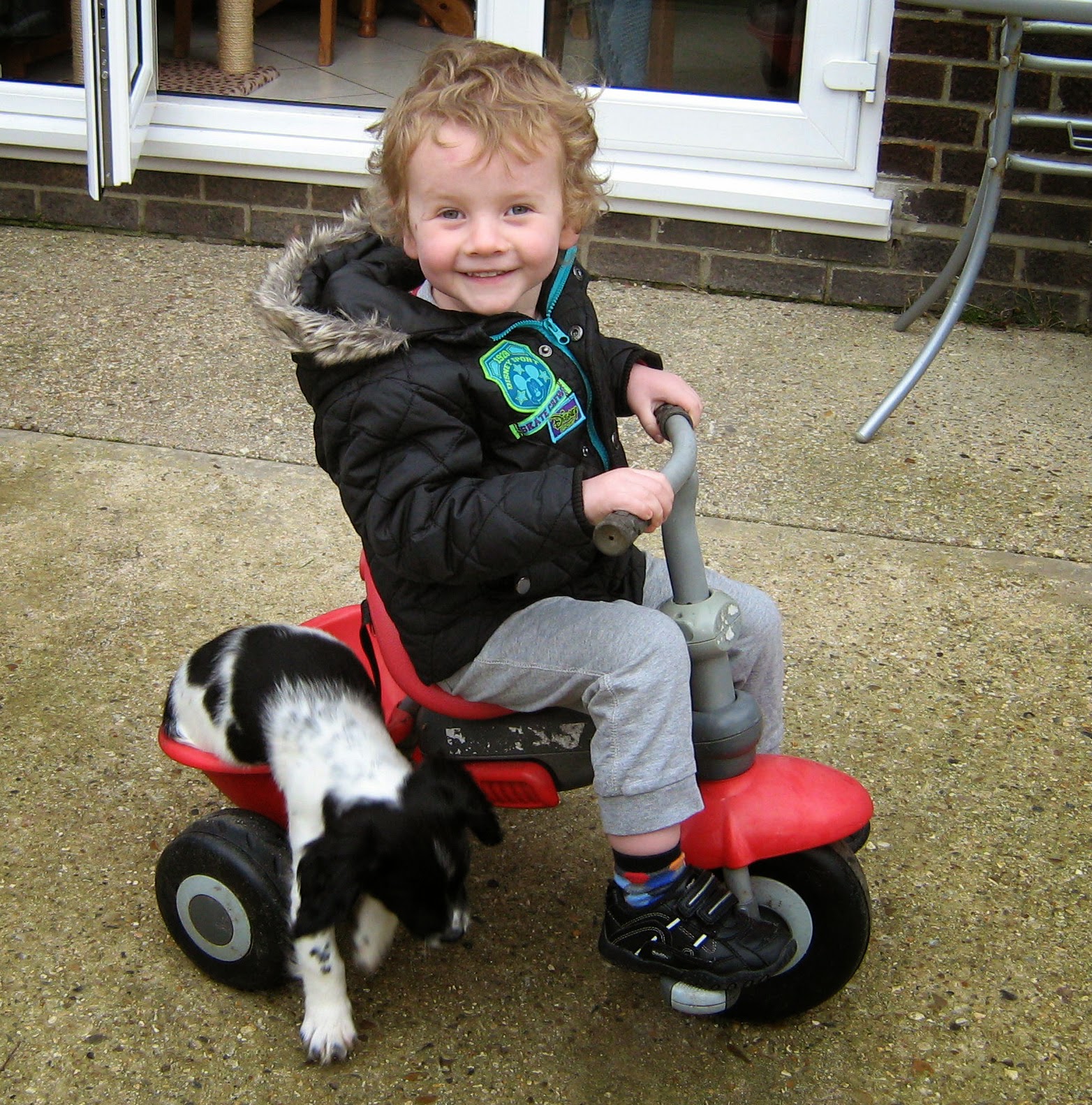 He noticed I was gone and went upstairs to look for me. When he came back down Grandad said, “Did you find her?”

“No,” he replied. “But I found her crocs and trousers on the bed. I think she’s gone to get the guys…” Scandalised look. “…without any trousers on!”

Dusty had his 2nd lot of vaccinations today. Soon he will be able to go out in the Big Wide World.

And we’re getting a cat flap fitted in the next few weeks so Fizz won’t have to wake me up at 3 in the morning to be let out!  What with the cats being able to come and go in the middle of the night and Dusty getting out for some much needed exercise, I may even get some sleep! 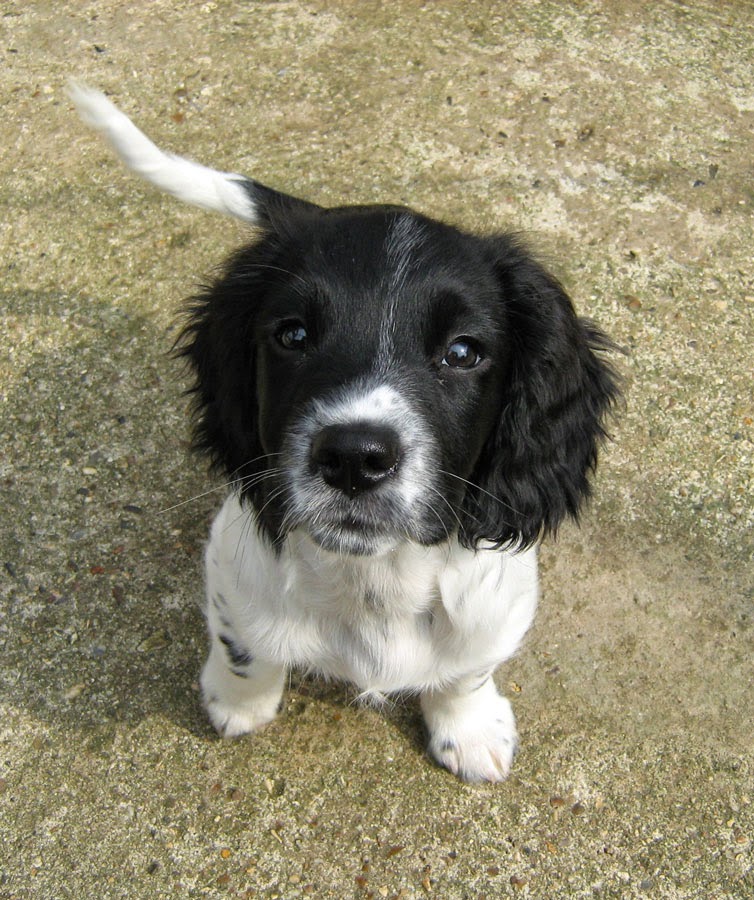