When Harley was a year old and went in for her annual check-up, our vet found her back teeth covered in tartar and her gums very red. She was taken in for a dental clean up and fortunately kept all her teeth.

She was tested for Calicivirus, but it came back negative. Apparently the tests can give a false negative, so it’s still a possibility that she had the virus before we got her. Or it could be a genetic problem.

We know that she had a bad start in life. She was dumped along with her brother over the sea wall onto the beach when she was very young. Fortunately someone saw it happen and was able to rescue them.

Those people who threw her away like rubbish have no idea what they're missing. She's such a sweet-natured and kind little cat and she has a very special bond with my almost-8-year-old granddaughter Izzy (even if she does wake her up taking photos of her!).

She was expected to have to have a dental clean up every year, but at every six month check-up she hasn’t needed one – until this time. The vet thought she might lose one or possibly two teeth, but said she wouldn’t know until the teeth had been cleaned.

She had to have four out. That was a shock. I didn’t think her teeth looked as bad as they had that first time and that she’d just need a clean-up.

As she dislikes soft food in any shape or form, I had to soften her kibble with warm water. She had to have antibiotic capsules twice a day and a squirt of Metacam, an anti-inflammatory. She is so good taking her medicine.

Since the problem was first found two years ago, she’s had special food for oral health and a sprinkle of Plaque Off on her food.

I took her for her post-op check on Saturday and they were very pleased with how well her gums have healed already. It’s very sad and frustrating to think this is an ongoing problem and that she will probably lose more teeth no matter what we do.

But she is a happy and content little cat and now those teeth have gone, probably a much more comfortable little cat!

Well it didn’t happen. After all the warnings and evacuations, there were no significant floods in this area thanks to a change in the wind direction. Further up the coast in Whitby and Hornsea, they weren’t so lucky, but even so, it wasn’t the disaster they had been preparing for.

My daughter’s house was in a danger zone and they moved valuable items upstairs and packed bags, ready to come here if necessary. We were a whisker outside the potential flooding zone.

Were they right to evacuate some areas? Yes, they were. Better to put up with a little inconvenience than to suffer the way people did in 1953. On that night, my mum said it was like a tidal wave coming down the street. People lost their homes, their possessions and their lives.

I wrote a post five years ago about the 1953 floods, "The Eyes Say It All", with photos from the time. We should never be complacent about what could happen when a storm surge coincides with a spring tide and a strong wind from a certain direction. I would rather be evacuated from my home unnecessarily than risk going through what my mum and so many like her went through all those years ago.

We didn't get much snow either, much to the disappointment of the children who were all hoping for school closures and snowmen!

Dusty still has the remaining scrap from his Christmas toy sheep. It has now been joined by the remains of a cow, a monkey and a donkey which he was given on his third birthday last week! 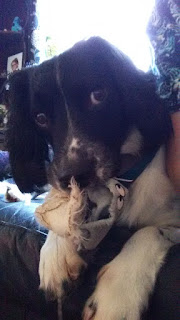 We were sitting round the table drawing and Dusty decided he wanted my youngest grandson’s toy dragon to add to his collection! I didn’t get a single photo of him trying to steal it without his arm being a blur! 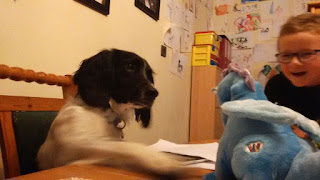