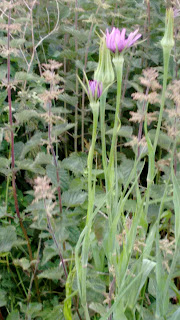 I’m sure I’ve blogged about this before years ago, but does anyone know what this flower is? 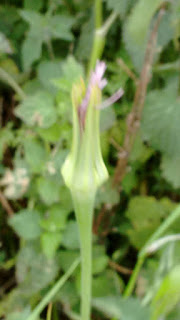 It’s raining and blowing a hooley so was a bit tricky to photograph. 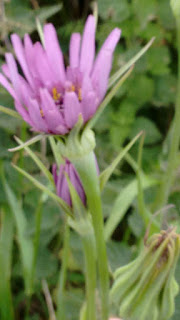 It grows in abundance along the dykes and today we saw some growing at the side of the road. When it goes to seed, it’s like a giant dandelion clock. It’s very pretty. I tried gathering the seeds and scattering them in my mum’s garden – which must have been almost twenty years ago - but without success, yet they seem to plant themselves anywhere.

UPDATE - After all these years... I think it may be Salsify. 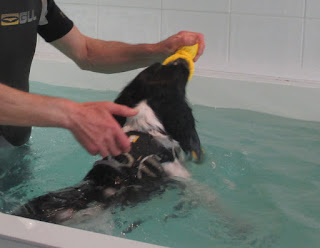 Hydrotherapy at Greensmere has worked wonders for Dusty. It’s amazing to see his back legs kicking equally strongly under the water – and know that he isn’t putting any weight on his joints.

The first time we went after the TPLO surgery, Ian spent a lot of time getting to know him and letting him get to know his surroundings. He was a little nervous about going into the pool the first time, but once he knew what to expect there was no stopping him.

Now he's having hydrotherapy to help his recovery from patella luxation surgery. He plays with toys in the pool and at all times Ian is in the water with him, holding on to the special harness he has to wear. His sessions are carefully timed and afterwards he has a shower so we leave with his lovely soft fur smelling pretty.

He gets so excited once we turn onto the country road and he realises where we're going! It's such a big treat for him.

Lynne challenged us to write about three beautiful things once in a while.

Since reading the post, I’ve been looking for – and finding – beautiful things every day. I know they are things that would have been there anyway, but I am taking time to stop and appreciate the beauty in everyday life. It’s so easy to get bogged down in the not so beautiful.

So here are three beautiful things from me for today.

Tea! Sitting in bed this morning being lazy with a cuppa and a slice of toast with grapefruit marmalade and Dusty cuddled up next to me. Such a treat.

The rain. It’s that gentle summer rain that tickles the skin and makes everywhere look lush and green.

Fruit! I made a fruit salad this morning with strawberries, grapes, kiwi, melon and blueberries. It looked so pretty and tasted so nice with a dollop of vanilla ice cream. Watching my little people tuck in was a joy.

Thank you for the suggestion, Lynne. Sometimes good things get shaded out, but it’s good to notice them – and know you’ve noticed them.

And here’s a gratuitous photo of Dusty – being free to go where he chooses, but choosing to be in here with me. 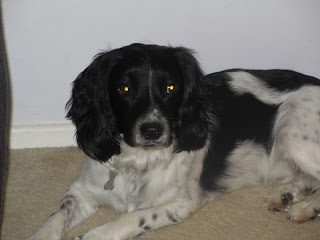 What We've Been Waiting For

Dusty had his x rays today. When we took him in, the lovely orthopaedic surgeon made a fuss of him then examined his leg and said he couldn’t get the patella to pop out of place – which was great!

He then took him away for his x rays and we had a couple of hours to kill. We decided not to go anywhere but sat in the car for a while with a cup of coffee. I practised writing with my left hand (see Rosemary’s blog for why) and we watched the comings and goings of other patients and their people.

It was quiet in the waiting room so we went back inside half an hour before we were due to pick him up. Lovely vet came out, saw us sitting there and said, “The x rays were great and he’s awake. I’ll see if he’s okay to come home.”

A minute later there he was, still a bit woozy from the anaesthetic, but pleased to see us. We can increase his on-lead walks now and we’re to ring in three weeks to let the vet know how he’s doing. He’s still not allowed to see Poppy because of the rough and tumble risk, but hopefully it won’t be too much longer.

He’s still hopping occasionally, but hopefully that will fade as he exercises more and with the help of hydrotherapy.

He got a lovely bandage with pictures of tractors on (from the anaesthetic). 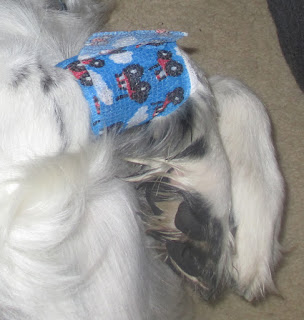 Harley’s favourite place is on my bed – usually on her back with her legs in the air! 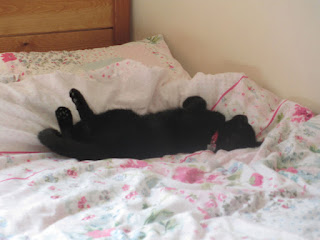 All right for some isn’t it.

Not sure what’s happening with Blogger just now. Almost every time I load it up and visit blogs, the internet freezes – and trying to write a comment takes ages. I start typing and no words appear on the screen, then suddenly they arrive in a rush.

Dusty started hydrotherapy this week and was so excited to be back in the water. He had a great time. I forgot to take my camera, but will try to remember next time. We’re back at Newmarket on Wednesday for X rays and to see how he’s doing.

I did write a long post about typewriters, then decided to delete it. Needless to say if I had the space, I would collect typewriters. I love them! I have a noisy keyboard, but it’s not the same.

Hope it’s warmer and sunnier where you are than it is here - and hopefully next time I post it'll be something a bit less waffly! 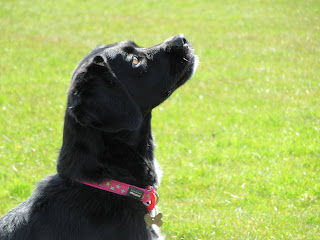 This is Poppy – my daughter’s dog and Dusty’s best friend. They haven’t been allowed to see each other since his first operation last November. It’s been hard on both of them and I can’t wait until he’s healed up enough so they can play together again. The trouble is they go crazy when they see each other and play so rough, we can’t risk it just yet. It’s all part of the rules, no running, no jumping – and no playing with his mates.

Dusty is so sensitive to her name that when I talk about her, I have to refer to her as my little flower. I daren't say her name and raise his hopes that she  might be coming to see him.

I saw a very strange sight this week, an extremely tall man with a frighteningly tiny head. It was only as I got closer I realised it was a man carrying a very small boy in a sling on his back. Maybe I need to get myself off to the optician.

Hasn’t there been a change in the weather? Just wonderful isn’t it? Certainly helps with the positive thinking!

Hope the sun is shining on you!

Oh the agony of the first day of the month back in those horrible school days, going through the whole morning being pinched and punched and not being allowed to retaliate because of the no returns rule.

Then when I did get mine in first, they came back with, “A punch and a kick for being so quick and no returns.”

You soon learn though.

Much nicer to wish people love and sunshine on the first of the month and that is what I wish you.

Dusty is still getting the occasional cardboard box to chew to alleviate the boredom. He reduces them to tiny pieces as he will demonstrate.

And leaves them scattered all over the floor for me to pick up later. My poor desk - I sit with my legs crossed (very unhealthy) and my foot pressed up against the leg. That's over thirty years of damage right there! The scratches round the bottom of the leg were caused by teeth... not mine!

It’s four and a half weeks since his last operation. He’s on painkillers as he still hops occasionally on that leg although he generally walks well on it. He has his first hydrotherapy appointment booked this month which will hopefully help.

I can’t help feeling pessimistic though. I certainly won’t be going to his follow up appointment in a couple of weeks thinking that he’s done well and all is as it should be like I did last time. I’m usually all for positive thinking, but on the other hand if you expect the worst anything better is a bonus.

Does positive thinking work for you?