Every morning starting around 6 am I hear the geese (Brent geese I think) flying south towards the salt marshes. They come over in waves for about an hour, squawking and clacking. I love listening to them. They are always too early for me to get a decent photo, but I managed to get a couple at 7 am. Poor quality and the smudge in the sky isn’t very impressive, but I thought the sky was a pretty colour. 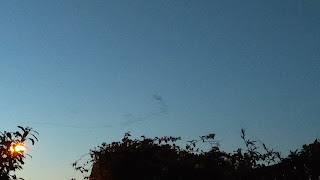 I have seen some birds flying north. Not sure what they were, but they were smaller than geese and silent. Maybe they move out when the geese move in. 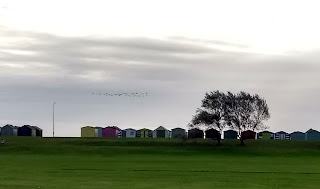 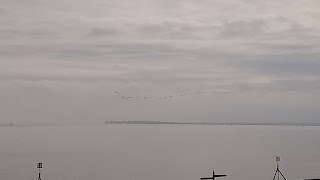 As it is half term we’d planned a trip to the cinema on Wednesday, but a completely flat tyre put paid to that and as we had already booked the tickets, we lost the money. This is the third time we’ve had to cancel a pre-booked cinema trip in the last few years, but hey ho, I think sometimes these things happen for a reason.

Anyway, thank goodness for parks this week! We’ve spent hours in them! Hours and hours, making the most of the lovely weather. 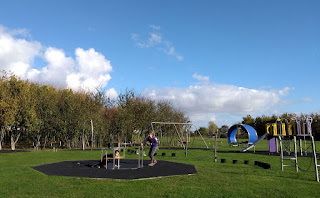 We had our oak tree lopped back this week. It’s always sad to see it so heavily shorn, but it recovers quickly and we always wait until the birds have definitely finished nesting. I just hope most of the bugs and spiders managed to get away before it all went in the shredder.

I always find it very worrying seeing the guy so high up the tree with his chainsaw.

Harley was terrified and stayed behind the sofa until they had finished. It’s very noisy with the chainsaws going and the big shredder chewing up all the branches.

At one point you couldn’t see the garden because it was just full of lopped off branches. 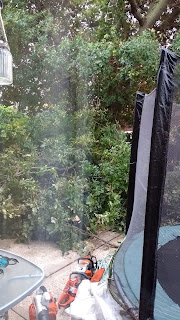 Dusty wasn’t bothered at all. He just wanted to get out there and play in all the exciting new bushes that had suddenly appeared.

Tinks was pretty relaxed about it all.

They did such a good job of clearing up and raking when they’d finished, that the garden looked tidier than it did before they arrived!

Pup On My Pillow!

Got into bed the other night and thought my pillow felt a bit lumpy. Found this underneath it! 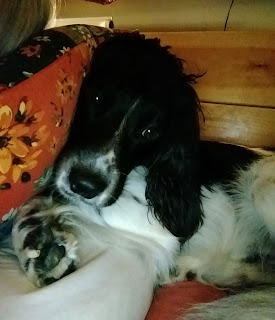 That was him looking as if he thought I hadn'tnoticed. 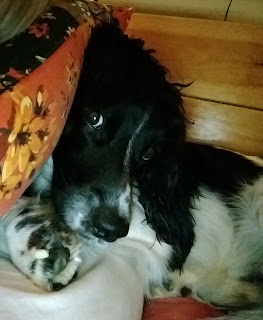 That was when he realised I had!

Saw this chap about to raid a neighbour’s pond! Very hastily taken as he was about to slither out of view. Not that herons tend to slither. 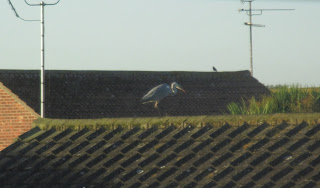 Almost didn't have any photos at all! Photoshop stopped working, the drop down menus were empty and it turned out to be something Windows 10 did on their last update - removing fonts that Photoshop uses. So it had to be reinstalled. Thankfully working okay now.

Last weekend I planned to go to the Sea Shanty Festival. I love it, walking round the old town listening to the music. Something incredibly cheery about a sea shanty and it’s a great atmosphere. It’s about 2.5 miles from my house to the quay and I set off on Saturday with good intentions, but ended up turning home within half a mile of my destination. It was hot and clammy and I was tired. It had been a busy week.

I could have gone on the second day of the Sea Shanty Festival, but I’d already planned to go to the Ipswich Vegan Festival at Portman Road. It’s years since I’ve been to the football stadium and it was kind of nice to be back there.

I’ve never been to a vegan festival before so it was good to do something different.

There was a small queue when we arrived, but it grew longer and longer and once we were in, people didn’t stop arriving. There were so many stalls, Tower Hill Stables Animal Sanctuary, Sea Shepherds UK, Animals Asia, Actions for Greyhounds, Animal Aid, The Humane Research Trust to name but a few.

And there were stalls selling vegan products and books.

I bought some things from the Hunt Sabs stall and Greek Animal Rescue.

You wouldn’t think we’d still need hunt sabs so many years after it was banned, but we need them now more than ever.

I am thrilled it was so popular but once the Sir Bobby Robson Suite started to fill up, I started to get nervy. I’m not good with crowds, I can’t think straight and I get panicky. I felt quite emotional too, seeing all those wonderful people there with their stalls and I would have bought from every one of them if I could. I would have liked to have spoken to more people too, but I go sort of numb once I get in panic mode and can’t think straight.

It looked quiet on the stairs so we went up to the Legends Suite where the vegan food was and it was much quieter. I calmed down pretty quickly and got into an interesting conversation with the Norwegian Bakers. Their stall was amazing! And so tempting! Too tempting.

But I’d run out of money. My other half came to my rescue and I (he) bought some cakes and pastries. It made me realise how far I have to go before I produce anything anywhere near as good as that.

I brought Dusty and Poppy back some vegan dog treats which they said were yummy!

Definitely somewhere I will go back to. I don’t always get like that in crowds, so perhaps next year I will do better and maybe stay longer to listen to some of the talks and music.

I was there on Thursday.  I went down before the PS Waverley was due to sail. It was windy. I’d rushed the dogs round the field at double quick time so I could be there. No sign of her. 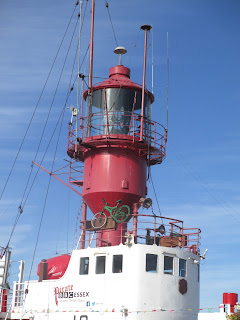 And a solar powered light vessel. 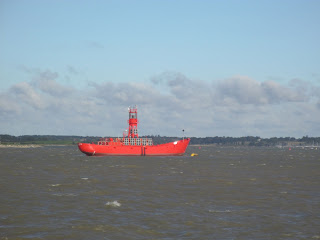 A young gull sitting on a small boat. 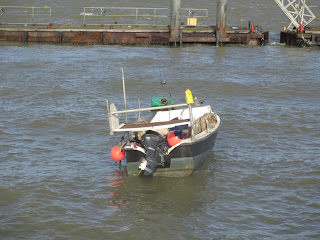 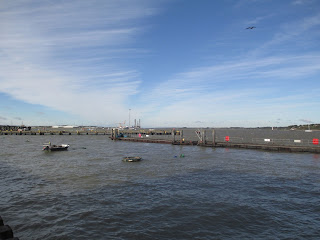 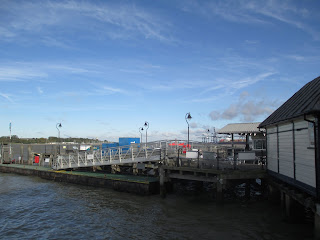 We waited, then got fed up being blown by the wind and went home. So maybe she nipped in and out again as we were walking away. I know she sailed to London that day.

I did see a rainbow Thursday evening though. It was a completely perfect one, but I couldn’t get the whole thing in shot. It really was beautiful and I took time to stand and stare and wonder at the marvels of nature. It rather made up for missing the boat. 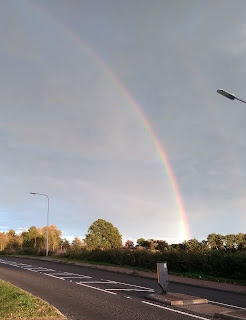 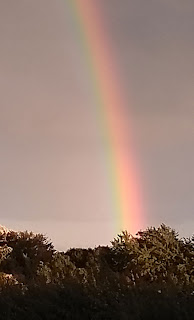 There is something about ploughed fields that appeals to me. And if you look closely, you can see the sea in the distance and Walton-on-Naze. 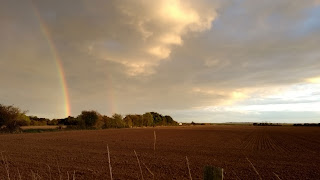 Oh, yes I did, I certainly did. My daughter let me know that the Waverley paddle steamer was in at the Ha’penny Pier the other evening when she was out for a walk with her family. So the next morning…

Well, the Waverley had gone up to Southwold and was sailing from there to London, so she must have just been overnighting here.

But I looked up the timetable and she was back on Saturday! Hooray! I’ll go down and take some photos, I said. Don’t let me forget, I said. I told everyone that was my plan and said I hoped the weather would be nice for taking photos.

But… she is back here on Thursday. I wouldn’t put money on me remembering to go down, but she’ll be here in the morning before heading down to London, then back in the evening so I have two more chances to miss seeing her.

I had hoped to post photos of the paddle steamer, but instead here’s a photo of what greeted me when I went up to bed last night.

How a cat can manage to look dignified and disdainful sitting on the loo I don’t know – but I know exactly what that look says. “You missed the boat didn’t you – you stupid woman!”