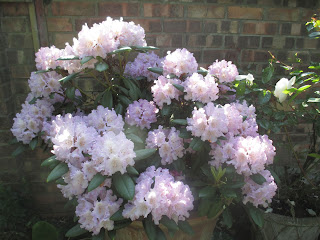 Happy Summer Solstice. Tonight we should be able to bask in the friendly light of the strawberry moon – if the clouds break.

As my eldest son gleefully reminds me, after today the nights will start pulling in. This thought does not make me happy. Unlike my children, I don’t like the darker evenings, but we still have a lot of long light evenings left.

We think our oak tree is well over 100 years old and I’ve probably posted about it and the huge amount of wildlife an oak supports (more than any other native tree) before, so I shan’t repeat myself.

If we ever move from this house, I shall miss the tree more than anything. It has four main trunks (or are they limbs?) and scars lower down from where others were taken as if it was once coppiced. 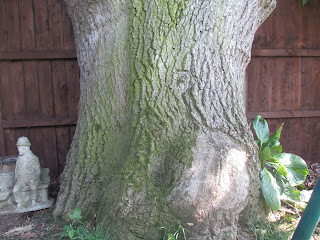 At the moment it is pouring with rain and the tree is full of birds happily singing.  Must admit, the photos were taken a few days ago on a sunny day.

And the writing plans? If you write for magazines, you should be turning your thoughts to autumn around now. Close your eyes and imagine those are leaves battering your windows along with the rain.

Around a year ago, I decided to try and sprout an avocado stone.

By August I had this. 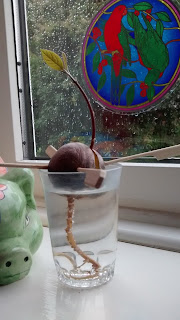 I was ridiculously pleased with it and now it has grown to this. 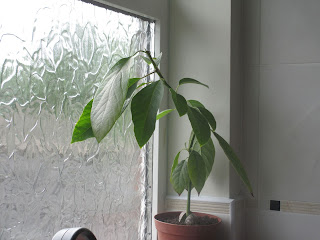 I’ve cut it back several times in an attempt to get it to bush out a bit.

I also have this one, sprouted around September. 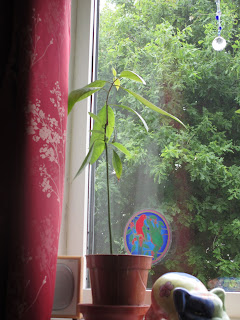 And this third one grew masses of roots and I thought it was going to curl up its toes before it ever sprouted, but suddenly it did and it looks the sturdiest, bushiest plant of the lot. 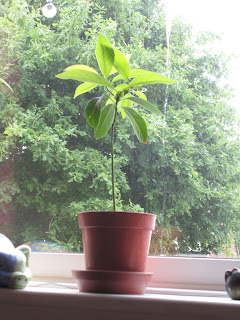 My only problem now – what to do with them?

Today I brought Poppy back here after her walk. Dusty was peering under the gate as I drew up on the drive. He was happy to see me, but when he saw me get Poppy out of the car, he screamed with excitement.

They greeted each other enthusiastically and have now settled back in the old routine. He’s asleep under my desk and she’s asleep downstairs. Seven months must be years to them.

It will be a while before they can go for walks together as we’re still building him up and they do tend to go a bit wild together. But one day, Dusty and Poppy – not long now I'm sure! Trying to get them to be still for a moment for a photo - near impossible, but their smiles say it all even if they do look as if they have enormous heads! 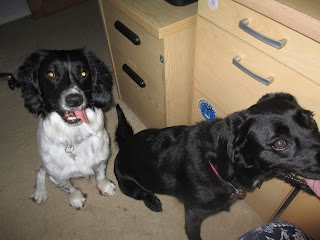 This week we had the okay from lovely vet to let Dusty have some off leash exercise, just a few minutes at first. Those little muscles have a lot of catching up to do!

He’s been pottering round the garden and doing an hour a day on leash, but it’s not the same as running free.

Before he goes off, he has to warm up, so I walked him down to the rugby fields as his warm up and met husband and oldest son Rob down there. I wanted back up in the shape of someone who can run in case I let him off and he just took off! I didn’t think to take my camera, but luckily Rob did and he got some great shots.

Almost seven months since he was off the lead.

As soon as I unhooked him, he let out the happiest bark I’ve ever heard. I haven’t been able to stop smiling since!

When I heard they were making a new version of The Jungle Book, I thought, “Why?” I remember going to see the first one at the cinema when I was about ten or eleven and it was quite different from other Disney films I’d seen.

But, you know, half term, lousy weather, got to do something so off we went – minus one as one of my little people was last minute poorly.

I’d skimmed through a trailer for the film, muttered about why mess with something that was perfectly all right.

You can see the trailer here.

Within minutes of the film starting, I’d changed my mind. I laughed. I cried. Actually I cried quite a lot. It was stunning and Neel Sethi who played Mowgli – well he was just gorgeous and my goodness, so believable!

When we left the cinema, Mr Teresa and I discussed who would bring the poorly one to the cinema the next day to see it. “I don’t mind seeing it again,” I said with a smidgeon of self-sacrifice. “No, no,” he said. “I’ll bring her to see it.” The oldest of the little people, who is almost as tall as me now said he’d come too – to keep his sister company of course.

We continued the discussion all the way home. “I’ll do it.” “No, let me!” “I insist.” But in the end it was pointless as we had gone on the last day as I found out when I went online to book tickets for the following day.

Ah well - hoping now it is on Movies for Juniors at the cinema in the summer holidays and if not, well I’ll probably (definitely) be getting the DVD anyway.

The sun has turned my own little black panther rusty! 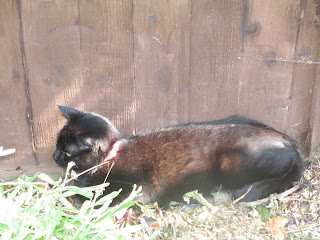