I am delighted to showcase a new novel by Liz Grace Davis, Honeysuckle and Jasmine which is released today and is partly inspired by true events. 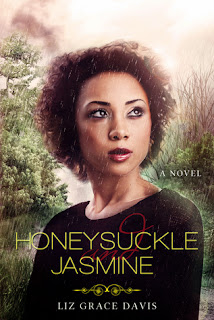 The past is never far behind.

Senia Loato’s life has been needled by disappointment, and the wounds that fester go beyond skin deep. She is certain if she puts miles between her and her tainted past, she will somehow outrun it. When she’s offered the chance to leave her island home of Mintang to become an au pair for three boys in Germany, she takes the opportunity to start running.

In Germany, she meets Miina, another African au pair. What builds between them is a life-defining friendship, one they will risk everything for.

Here is an excerpt:

Back in my newly renovated basement apartment, I drew a deep, shaky breath, then lifted the box I'd left on the bed earlier. I carried it to the outside rubbish bin and returned empty-handed. Now all I had to do was shake off what was left of my emotional baggage.
Easier said than done, I mused. Why wouldn't it be? For years I'd felt like a piece of clothing that had been ripped open at the seams, without a seam ripper to lessen the damage. Then unravelled until all that remained were pieces that had once belonged to something whole.
That didn't matter now. I should be thankful that the fabric was still intact, the individual pieces just waiting to be sewn back together, stitch by stitch.
If there was something I knew how to do, sewing would be it. Sure, at times I'd probably veer from sewing in a straight line or mistakenly jab a finger with the needle. Fine. I'd just start over, next time with the help of a thimble.

And a short review by me:

This is a novel with a gentle, but determined main character, Senia, who has to overcome many obstacles before she can move forward with her life. It is a novel about friendship, love and sacrifice. I found myself caught up in Miina’s story too and I loved the description of Senia’s life in Africa, both the place and the events which formed her character. An enjoyable read.

Liz Grace Davis grew up in Angola, Namibia, South Africa, and Germany. She now lives with her husband and daughter in Vienna, Austria.

Her travels offered her the opportunity to gather interesting material, from both her own experiences and those of others. She is a firm believer that memories, both good and bad, are worth cherishing because they lead us to be the people we are today.

Liz is the author of Chocolate Aftertaste, Honeysuckle and Jasmine, and Tangi’s Teardrops.

Liz has a Goodreads Author Page.

And a blog Novel Moments.

“King Richard, late mercifully reigning over us was piteously slain and murdered to the great heaviness of this city.” York 1485.

When I was a child, I remember standing with my mum in the Bloody Tower (originally known as the Garden Tower) while she told me about the wicked uncle murdering his little nephews. Yeah, yeah, I thought, but I want to see the block! In those days you could go right up to it. I remember examining the cut marks in it, searching for blood stains. It was without doubt the highlight of my visit.

But the wicked uncle? Well that’s what happens when the victors rewrite history. Heck, Henry VII even changed the date he took the throne to predate the Battle of Bosworth so that he could have Richard III’s supporters executed for treason. He later had Richard’s 24 year old nephew, Edward Plantagenet, (son of George, Duke of Clarence) executed having kept him prisoner in the Tower from the age of 10.

And in later years Henry VIII, had George’s daughter executed. You have probably heard of the 67 year old Margaret Pole, Countess of Salisbury, who was dragged struggling to the block and had to be held down. It took ten or eleven chops by the inexperienced executioner before the deed was done. But I digress…

So what did Richard III do? Plenty in his lifetime. But in his short time as King?

Among other things, he made major reforms to the legal system which we still use today. Bail. Innocent until proven guilty. A jury of people only of good character. And fair dos for all – that is money, power and privilege brought you no advantage if you’d committed a crime and justice would be done. He was the first king to make his coronation oath in English.

Now there is controversy over where his remains should be buried. Westminster Abbey with his wife Anne would have been the obvious choice I would have thought, but as I understand it, there’s no room and they’re not quite sure exactly where Anne is.

Leicester has the right to bury him because they found him and it was all part of the agreement when they began the excavation – in a car park!

In my own personal opinion, I think he should go to York where he was held in high regard and affection. His heart was in the north and it certainly appears from his association with York Minster that he planned to be buried there. His son was invested Prince of Wales in York Minster and was buried at Sheriff Hutton.

After the disrespectful way his remains were treated in Leicester prior to his burial and then lost, forgotten and built over – it just doesn’t seem fitting that he should be left there.

There are even e-petitions doing the rounds. You might want to sign one depending on your point of view. You may not care either way.

For York you have one which runs out on the 24th September - sign for York here!

And for Leicester there is this one which runs out on the 12th October (ironically created by a man called Shakespeare!).

My final word is that if we can afford a lavish funeral for Margaret Thatcher, then surely a proper ceremonial funeral for the last and much maligned King of England to die in battle should be possible – wherever it takes place.

What do you think?