Earlier in the holiday I took my two grandchildren-from-away to Jimmy’s Farm and I wanted to go back with the other four.

So last week I packed a picnic and off we went.

As soon as we entered the farm park, we were greeted by a young woman holding two ferrets. One she said might nibble fingers, the other would only lick. Needless to say they had a huge fuss made of them. Gorgeous little things.

My eldest grandson somehow got into conversation with her about being a vegetarian (possibly because of his badge saying, “Don’t panic and be a vegetarian”). She said, “I am too. And I work on a farm!” And she looked a little rueful.

Some of the animals there have been rescued. The female ring tailed coati was kept as a "pet" for two years in a bird cage and had pulled out most of her fur and engaged in classic pacing behaviour. She is learning how to be a coati with the help of her family and rarely paces now. We learned a lot from the keeper and he told us about how one of the meerkats was a former "pet" and had been rescued too from a very unhappy existence. 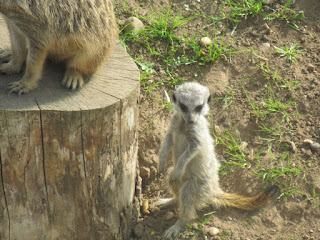 The kids did the den-building and bouncy pillow bouncing and we went into the butterfly house which was amazing and very hot and humid. It felt chilly when we stepped back outside into the sunshine. 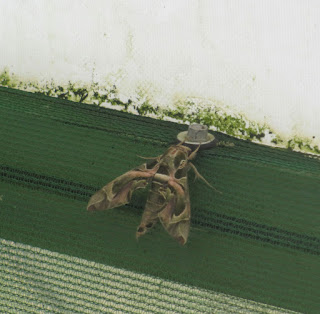 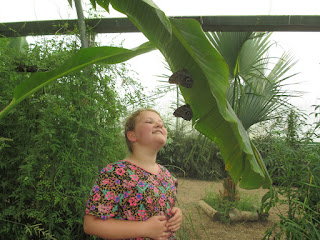 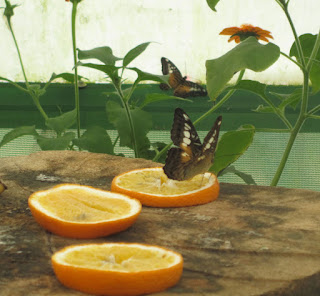 This time we saw a sow with her piglets. My eldest granddaughter begged and pleaded with me to let her take one home. She was sure if she jumped over the electric fence and grabbed one no one would notice. I thought she was joking, then she got quite upset. “I just want to save one from being eaten,” she said. But the pigs were within the zoo side of the farm park, so I crossed my fingers and said they weren't being raised for meat.

But even if they are, I'm sure they have a better life than most pigs and at least get to live outdoors with freedom to move around. I have always loved pigs and I just don't like to think of eating them, but realistically I know it happens and if it has to, then I would wish the best life possible for them - if that makes sense. 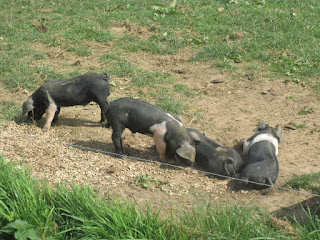 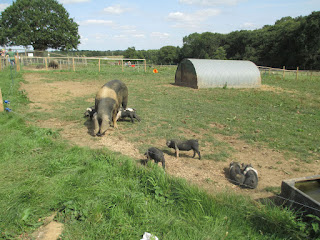 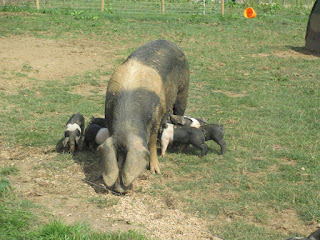 Then the two girls declared that they would become vegetarians. Tomorrow. Which by the next day had become next week, but by the following day my little would-be piglet kidnapper had stopped eating meat. So there are three of us now and our family is very supportive and have vegetarian days too.

On Friday night they stayed for a sleepover. Not much sleep was had. They all like to be in the same room – with me – and there is chatting and whispering and giggling into the early hours.

I was going to take a photo of the aftermath – the piles of pillows, airbed, fold out bed, sleeping bags, duvets and essential soft toys, but I was busy making pancakes for breakfast while that was all cleared away. It would have been a bit of a horror picture anyway!

I belong to a Facebook group called Harwich Rocks. The idea is that you find rocks and stones, paint them (or use nail varnish or pens) with patterns, words, characters etc. then you hide them around town, by the beaches or in the woods. Anywhere you like really.

So many age groups are taking part from tiny children to proper oldies like me! We gathered up a bucket of stones in all shapes, sizes and colours and the kids spent ages drawing pictures and patterns and writing captions on them ready to hide next week.

Next week we’ll go on a rock hunt and hide ours. It’s such a fun thing to get involved in and we have about 20 or 30 ready to hide. I will try to remember to take some photos of our hiding places and any we find. The kids really enjoyed doing it and we will gather more rocks ready to do the same again in the half term holiday. When the stones are found, they are often hidden elsewhere for someone else to find. It's really caught on locally - isn't it a great idea?

I decided not to bother with the Blue Flag beach last week and we went down to Harwich beach instead. This is the beach where I went as a child and where I learned to swim. And it is where we used to take the grandchildren when they were smaller. We stopped going once they started showing too much interest in the water before they could swim.

It’s not designated a bathing beach (tell that to the locals who like to swim there!), but look at that sand. Much kinder on the feet. St Nicholas church in the background is where I got married many years ago.

Apparently it is a rare example of an emerging dune system in a coastline which is predominantly saltmarsh. I read that on the local council’s website.

And my little fishies loved the deeper water with no rock hazards lurking beneath. The girls were in the sea almost constantly until the tide started going out. The boys were in and out of the water, but it was very cold. I had my swimming costume on, but I wasn’t tempted to join them.

They went out of their depth and I kept a close eye on them just in case, but they were sensible and didn't go out further than was safe. I always enjoyed swimming out of my depth too when I was their age. 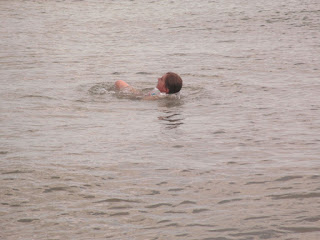 Someone fed the gulls while we were there and they gathered round a little boat hoping for more. The pier in the background is where the Pilots leave from to guide ships into the harbour. Beyond that with the newly repaired building is Harwich Dock (not to be confused with Harwich International Port) and the cranes beyond that are at Felixstowe.

And we watched these two dinghies leaving and coming back. A friend who knows much more about these things than me tells me that they are Finn dinghies, the type in which Ben Ainslie won gold in the Olympics.

We’ve also been clearing out the garage and found loads of old photos including one of one of the Dovercourt lighthouses taken between 1901 and 1910. There was a lot more sand there back then, but look how busy it was!

Number Three granddaughter got some new pyjamas this week. She loves them! We teased that the caption ("I had fun once. It was terrible") suits her so well as she can take life very seriously at times, but she is always telling jokes. They all have Youtube channels – she asked if I’d post a link to hers so here it is. Izzy Enderman. At the age of eight, she wants to be many things and one of them is a famous Youtuber! I see Dusty has managed to get his tail in the photo.

It was so very hot and sunny earlier in the year I bought tons of sun cream, yet as soon as the school holidays started, away went the sun.

For me, this has been perfect holiday weather. Being cloudy has meant I haven’t had to keep applying sun cream to young skin and worrying in case I missed a bit.

None of the kids want to play on the beach any more – they just want to swim in the sea, so in future I’m only going down there when the tide is in. Last week my eldest granddaughter gashed her leg on a rock just under the water. If we’d been down there at high tide, it wouldn’t have happened.

Poor little girl came away from the beach with blood pouring down her leg (looking worse because she was wet) and I thought we’d end up at minor injuries, but once she was in the bath, the bleeding stopped and we went back to the beach to rejoin the others. I think she’ll have a scar on her leg though as the cut was quite deep.

We went to good old Clacton Pier this week. My smallest little person was at last tall enough by a whole centimetre to go on the Aqua Blast Lagoon in a boat of his own – and they all had a blast (see what I did there). Only seven boats were operating and my crew took up four of them. Ours were the red/blue, green/blue, blue/yellow and blue/white. 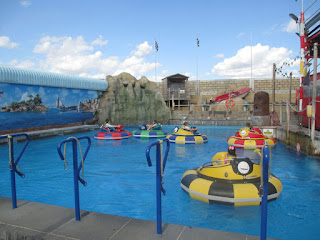 We spent nearly seven hours there. When we arrived it was raining and chilly, but within an hour the sun had come out, the jackets were stowed in my backpack and of course I didn’t have any sun cream so we all came home with sun-kissed faces – but no burn.

The 146 year old pier is undergoing refurbishment and I could already see a great improvement. I hope the refurbishment includes updating the loos – they still have the old high pull-the-chain kind of cisterns.

Dusty enjoyed his walk after heavy rain left a small lake on the field. The gulls love it when the field floods – they don’t love it when a water-happy dog splashes through it. By the next day the wind had dried the lake up.

I may have mentioned that I love gulls. When I was a child and my mum was in convalescence after a major operation, she said that what she missed most (after the family) were the gulls.

I took this photo of the lighthouse because there was a gull on top making that lovely racket that gulls make. When I was a child and even when my own kids were small, that beach was sandy. I don’t know where all the shingle has come from.

And I took this one of the sky because… well you can see why.

One day the boys and I had a walk round the woods while the girls went to the park which was lovely and relaxing.

Only two and a half weeks of summer holiday left. Where has the time gone? It goes much too fast.

We took my two granddaughters-from-away home yesterday and as always I felt sad to drop them off. The week passed so quickly.

At 7 and 9, they’re a bit past buckets and spades and just wanted to play in the sea. As with the week before, the water was rough and I was worried, but they enjoyed it. Swimming in the pool was much less nerve racking and they had a lot of fun in there.

I took them to Jimmy’s Farm (somewhere I’ve been reluctant to visit as it’s a working farm and farms make me sad for obvious reasons). My other grandchildren have told me it’s good and they were right. The girls had a great time. There was plenty to do as well as being able to feed some of the animals. 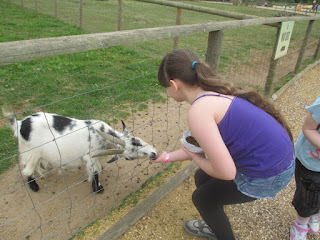 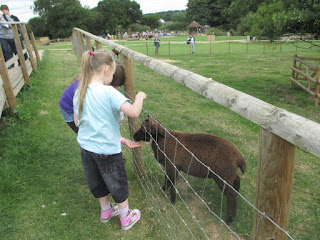 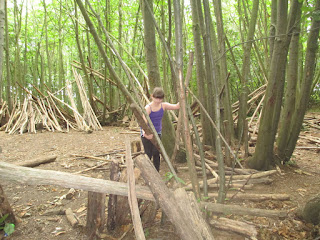 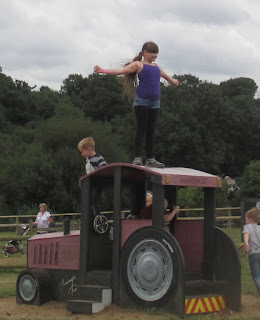 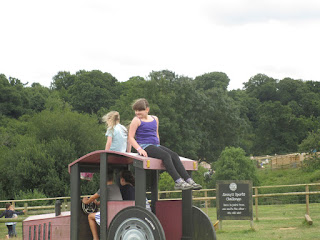 We decided to try Walton Pier for a change from Clacton Pier. It’s more geared to younger children, but they had fun on several rides (as did I), had a walk along the pier and played in the arcade. 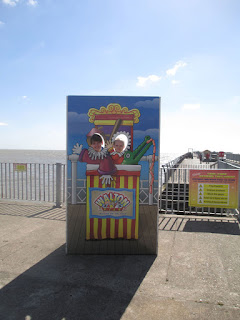 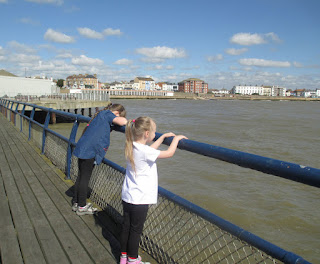 They spent Friday evening at my daughter’s house with all their cousins while I went to see one of my daughters in law playing Queenie in Blackadder. The drama group did three episodes of Blackadder II and it was brilliant.

The house feels very quiet today with just one granddaughter and one sleepy dog.