What is so special about May 2nd?

It is also the day on which Richard I gave Portsmouth its first Royal Charter, Anne Boleyn was arrested on charges of treason, witchcraft, incest and adultery, Baron von Richthofen was born as was Catherine II of Russia and Peggy Mount.

2nd May is Flag Day in Poland, National Education Day in Indonesia and Teacher’s Day in Iran.

On 2nd May Good Housekeeping magazine went on sale for the first time, Tennessee Williams won the Pulitzer Prize for Drama for Cat on a Hot Tin Roof and the King James Bible was published for the first time by printer Robert Barker. Mary, Queen of Scots escaped from Loch Leven Castle and the De Havilland Comet 1 made its maiden flight from London to Johannesburg.

Of course a lot more people you will have heard of were born or died on this day. And a lot of things happened and go on happening as they do. You could look up tomorrow and find it is World Press Freedom Day and a lot of other things besides.

Tomorrow is important for me because it will be Indy and Tilly’s eleventh birthdays. Today it is mine. Not my eleventh I am glad to say. When I was eleven I broke my arm, started at secondary school which I hated and lost both my great grandfather and my dog. It was not a happy year for me. 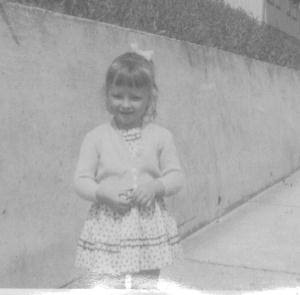 This is little me. I don’t know how old I was, but I think I was happy then – except for my fringe. My mum used to cut it wonky then she’d try to correct it and I’d end up with a wonky fringe about half an inch long.


And Indy has asked me to tell you that the rumours about him swimming in the dyke and then not being able to get out last week are untrue. He did not look scared out of his wits, he did not have to be helped out and he was not dreadfully embarrassed by the whole thing. That is his story and he is sticking to it, but he says there should be a sign for dogs at that particular spot pointing out that the bank is steep and also that the water level is lower than usual and he’s planning to write a long letter to health and safety about it. Not that he had any problems of course, but he feels a lesser dog may well get into difficulties. Tilly says she could have got out of it with her eyes shut, her legs tied together and a frog sitting on her back and that she hasn’t had such a good laugh for years!
Posted by Teresa Ashby at 09:21