Thanks Suzy for tagging me. I have to answer some questions and then tag three more people.

Q1 Do you think you’re hot?

Only when I’m not cold. 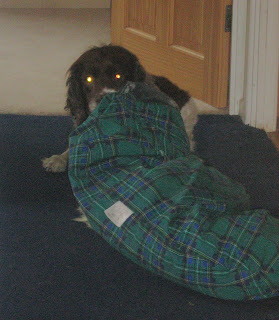 I was going to put my desktop picture up, but it’s already here on the blog somewhere so I thought I’d put the last one I took yesterday instead. This is Indy – he dragged his bed out onto the landing, flung it around, shook it, beat it into submission then left it for dead.

Q3 When did you last eat chicken?

At my daughter’s wedding in 2003 – it was an accident. I helped myself to some rather delicious looking creamy stuff from the evening buffet – goodness knows what I thought would be in it, but I certainly didn’t expect it to be chicken and in my defence I have to say my judgement was impaired. It had been an emotional day. And as it was a wedding I couldn’t spit it out so I had to chew it up and swallow it - it was only one mouthful, but it might just as well have been the whole chicken. It may have been Coronation Chicken, but I was so far gone by then it could just as easily have been Coronation Street.

Q4 The song you listened to recently?

Indiana Wants Me by R. Dean Taylor. Always loved that song and now I have it on CD along with a load of other R. Dean Taylor songs. And as I only currently have two CDs up here because I’m too lazy/forgetful to bring any others up, that is what I listen to.

Q5 What are you thinking as you do this?

Doesn’t it feel lovely and fresh after the rain and don’t the birds sound happy?

Q6 Have you any nicknames?

Loads. My first one when I was very small was Charlie Macey. A neighbour once said to me, “Hello Teresa, what’s your name?” So I said “Charlie Macey.” Poor man went and told my mum that it was a tragedy I didn’t know my own name. There have been others.

And now for my three victims! Hm, who shall I choose? This is the fun part.

Should you choose to accept it, I nominate…

Novelist in the Making

Your turn to answer the questions and pass it on, girls - if you so wish!
Posted by Teresa Ashby at 08:50