This week I am mostly pet sitting!

Yesterday was too hot to take the dogs out. They flopped around all day and didn’t seem to mind missing a walk and I must admit I was happy not to go out with temperatures in the high twenties.

This morning I got up extra early and took them out before it got too roaring hot and we stopped by one of the beach hut taps so they could have a drink. If we go along the Essex Way we take a bottle of water for them. Dusty does everything at high speed so gets hot and tired very quickly.

We have an occasional walk towards country instead of beach, but the farmer is harvesting and I have a fear of tractors and farm machinery which I think is called ochophobia. My husband reckons it’s a throwback to all those public information films that used to be on when we were kids showing people having horrendous accidents with farm machinery.

Today and tomorrow is the Clacton Air Show, but I don’t think I’ll be going this year. I’ve seen enough of Clacton for one summer. I always find the pier hot, noisy and crowded, but the kids don’t seem to mind. And I can always find a quiet spot away from the amusements to have a drink break with one or other of the little people.

I prefer the Ha’penny Pier - no thrills, but a nice place to be. The area below is known as The Pound and used to be home to our fishing fleet which was far more substantial than it is today. The Lightship is the LV18, occasional host to Radio Mi Amigo. It's interesting to go aboard for a look round.

I’ve seen lots of young gulls this year. I think they are incredibly cute! 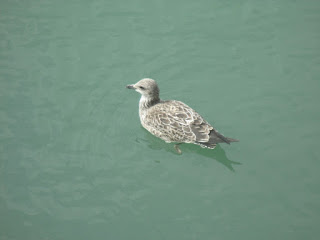 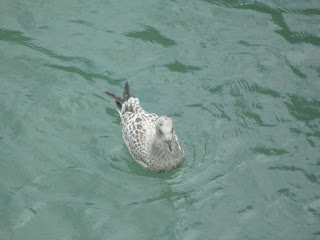 And I think there are pigeons nesting under the Ha’penny pier ticket office. I imagine they like their waterside homes.

It’s a lovely little building. Whenever I look at it, I imagine ladies and gents of old getting their tickets and waiting to board the paddle steamers. If you’d like to see a photo of it in those far off days, there is one here.

I made the decision to take time off from writing while I had the children and I’m going to do the same when my two granddaughters from away come to stay as from next week. They’ll be here the following week too which is going to be hard for the four going back to school, but on the bright side it’ll be much quieter when we go out and about with all the schools back in business. The parks are going to be a lot less busy!

Not that I want to think about them all going back to school. I have never liked the summer holidays coming to an end.

I’ve never had such a long break from writing before though (probably the reason behind my waffly blog posts).

It’s been a lovely summer – all those things I had lined up to do on rainy days were never needed - but I’m certainly not going to complain about that and there’s always half term to look forward to.