I like quirky things. Like this vase. I bought it about thirty years ago very cheap and it remains my favourite to this day. Imogen got me the pink flowers while she was staying in Yorkshire – I was incredibly touched that she’d insisted on bringing them all the way home for me. 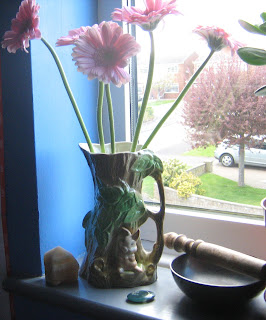 This is something from my childhood which sits on the chest of drawers in my bedroom. I use it to store empty pens, useless emery boards, old eye shadow brushes, dead batteries, a broken door stop… not to mention a cushion of dust and fluff in the bottom. 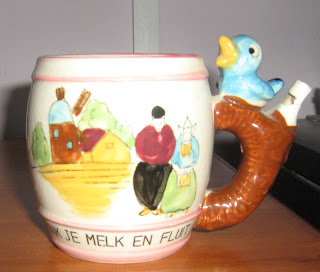 Hm, well it occurred to me that I shouldn’t use it just as a dumping vessel for stuff. I used to have my bedtime drink in it when I was very small and despite it being glued back together after an earlier accident, the whistle still works – I know because Isabel tried it.

It isn’t the classiest of things, but I am extremely fond of it. It is full of happy memories – I can still hear my grandad urging me to drink my milk and whistle! I’m going to stop storing junk in it forthwith and start treating it with the respect it deserves. 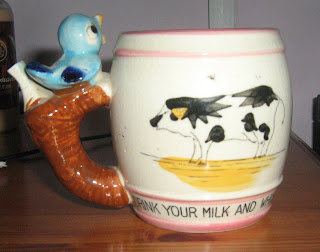 It used to encourage me to drink milk – which I hated. When they gave out free milk at school, I always declined. When we went on a school trip round Lord Raleigh’s farm he handed out milk to everyone (well I think it was him - I was only 9 at the time) and I told him I didn’t like milk, so he went off and found me a carton of orange juice. Cartons were a peculiar shape in those days. I didn’t like orange juice either, but I appreciated the gesture, thanked him and drank it.

Of course my mum got milk into me in other ways, in puddings, tea and on cereal. But for many years I haven’t had milk. Finding out I was lactose intolerant gave me the push I needed to switch to soya, but I think it’s a step I would have taken anyway, given what has to happen to put milk on our cereal and now you can buy lactose free cow’s milk – no thanks, I’ll stick to soya.

Sorry – didn’t mean to get on my soapbox there, but while I’m up here, I can’t imagine that anyone isn’t appalled by the deaths at the Grand National. Not just this year, but every year. There’s a petition on the government website to ban it – I know that isn’t likely to happen, but if enough people sign it, things might change. The link is here if you’d like to sign.

There is another petition here on the petition site which seems to be doing rather better and it includes a few facts about the racing industry that may surprise you.

And finally a brilliant piece by Brian May on his Save Me page on Facebook. He says it all so much better than I could. You can read it here.