Hugely talented short story writer, novelist, columnist, writing tutor, very good friend, dog lover – I could go on! I’m absolutely delighted to hand over to Della to tell you about her new book and how she came to write it.

The Dog with Nine Lives 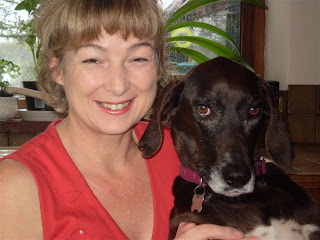 October is a bittersweet month for me. I love the smell of the mornings and the cosiness of the nights, I hate the feeling that summer is ending – not that it feels as though it is this weekend in Dorset, I have to say. As I look out of my window the skies are blue and apart from the puddles on the ground all over the forest where I ran with my dogs this morning, you’d have thought it was still summer.

I’ve also lost loved ones at this time of year. Last October I lost my beautiful Lindy dog. She was one of the sweetest dogs I’ve ever known and the time around her death was one of the saddest times for me, because I lost my beloved gran, soon afterwards, too.

On a happier note, I decided to write Lindy’s story down. It was quite a story. (Nine years earlier I’d found her living wild with 13 puppies on a Greek beach.) I never wanted to forget her – or how she came to live with us.

This was a project just for me. A tribute to Lindy. I decided I would self publish it. I began to write it soon after Lindy’s death and then I stopped in November when I lost Gran – because grief got in the way.

In January 2010 I went with my stepson, Adam, to see my publisher, Hazel Cushion, of Accent press, about an editing job she wanted us to do. While we were there I mentioned self publishing my Lindy book and she said, in that bright, casual way of hers, “We’ll publish that. How quick can you write it?” 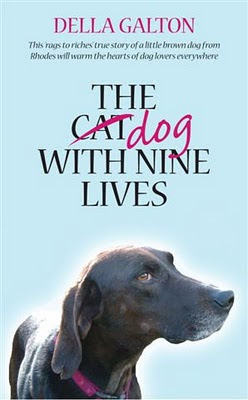 I was delighted, mostly because it meant the book would reach a wider audience and I wrote it as quickly as I could. It was a catharsis to write. I relived previous moments of Lindy’s life. I laughed a fair bit and I also cried. Although I write lots of fiction, I have never written anything so close to my heart, so important to me, so true!

It’s also the only thing I’ve ever written that my husband, Tony, has read (apart from the odd story, which he reads under sufferance, tee hee). But I made him read this – because he is, after all, one of the main characters in it, and I didn’t want him to later disagree or be upset with anything I’d put!

When he’d finished it, he came upstairs with tears pouring down his face. “It’s beautiful,” he said. “I felt as though I was reliving it all again. I loved it.”

High praise indeed from the man who ‘does not read’.

So this October, I am proud, so very proud, to see, The Dog with Nine Lives in print. It’s a little book, but it has a big story. And I know that whatever else I have published, I will always treasure it. One day when I am old and sitting in a rest home chair, I’m going to get it out and show people and say, “I used to know this dog.”

The Dog with Nine Lives is published by Accent Press and costs £9.99
http://www.accentpress.co.uk/category-7/9781907016608.html
Thank you, Della, Lindy's story sounds wonderful. I am looking forward very much to reading it.
Posted by Teresa Ashby at 09:54