I tried Caroline’s suggestion of holding a biscuit over my head with one hand and the camera with the other to get a decent dog shot. So this is Indy’s “I’m being good gimme the biscuit,” face (more about him later). 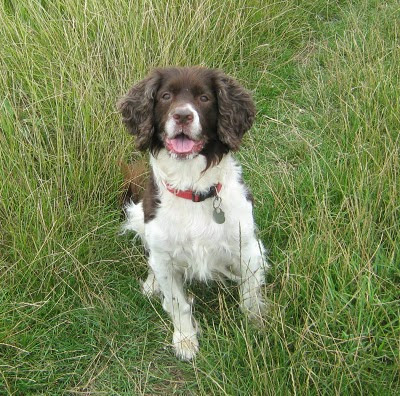 And this is Tilly’s “I’ve been in the smelly, dirty dyke, but I don’t think anyone has noticed,” face. 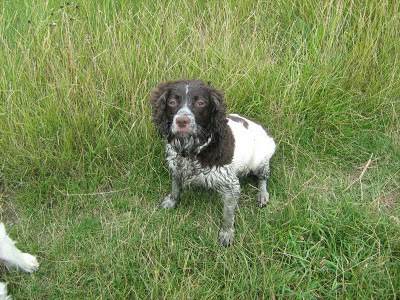 I love Thames barges. One day I am going to have a painting of one to hang over my fireplace – but first I would have to get a fireplace. What’s that got to do with the price of petrol I hear you ask – well nothing, I just wanted an excuse to put a picture of a Thames Barge on my blog. 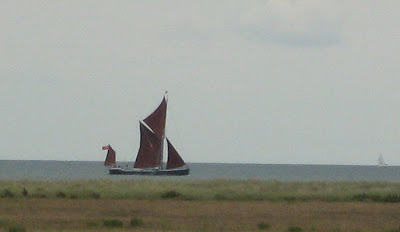 Last week was lovely. All my grandchildren were here, right down to the littlest, Charlotte who is 10 weeks old and just about the most placid, easy going, good humoured baby I’ve ever known.

I managed to get them playing quietly for oooh about a minute and a half with Play Doh. No that’s not true, they played nicely for quite a while. But why is it when you get something out for kids to play with, Lego, Play Doh, wooden bricks – you suddenly find yourself engrossed in making something and completely alone where they’ve all wandered off to play with something else? 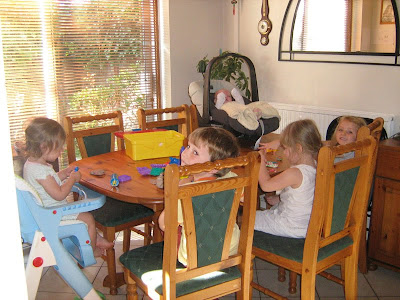 We managed to get a boat trip over to Shotley where Lachlan and Imogen posed for a picture. 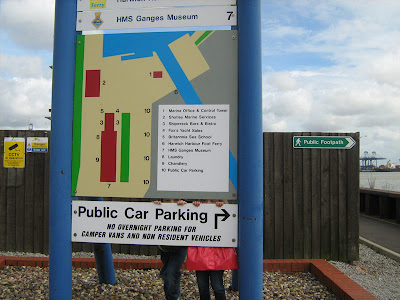 And I took this picture because I felt like it.

Now the serious stuff. They started harvesting just over a week ago and of course with the harvest comes the guns. You hear the men shouting at their dogs then the guns go off. I hate it, knowing every time there’s a gunshot something is either dying or hurt.

Indy found where they’d been gutting the rabbits that they’d shot. They’d left the entrails at the side of the footpath. I’m just glad the only child with me was Isabel who is 19 months old and not old enough to realise what it was.

Indy went straight for it and began to eat. But it was a similar incident that may have saved his life as a puppy – or at least it gave him a few extra hours. I’ve probably blogged about his pancreatic insufficiency before (but being of a certain age I'm allowed to repeat myself). He was only a few months old when he got sick and the nurse at the vets called him a skeleton with a head.

All his food went through him and came out exactly as it had gone in. The vet kept prescribing antibiotics but nothing was working.

On a walk before he got too weak to come out – it may have even been the last walk he had until he recovered - he came across a freshly killed rabbit which had been ripped open and he ate the insides before I could stop him. I thought at the time it was because he was always ravenous. Well it probably was, but amongst those innards must have been a pancreas and it must have contained live enzymes because his next poo was near normal.

I researched on the internet and learned about pancreatic insufficiency and asked the vet to do a blood test. Then we had to wait for the results while Indy died a little more every day. I didn’t think he’d last until the results came through and I asked for the enzyme powder that would save his life. The vet was reluctant without a proper diagnosis, but what difference did it make anyway? It wouldn’t harm him and might save him.

They gave me the powder and the effect was immediate and a few days later the blood test results confirmed the diagnosis. So began his recovery. This time 10 years ago he was a very sick little dog.

I wish I’d taken a photo of him when he was ill, but I couldn’t bear to. I thought he was going to die and I didn’t want anything to remind me of his suffering.

I suppose in my usual long winded fashion what I am saying is that yes, the sight of the grey and red guts dangling from his jaw today was gruesome, but it reminded me of how close we came to losing him and how lucky we are that he is still here.

And finally, another trip to Shotley. At last I got to see inside the HMS Ganges museum there this afternoon. I’ve been itching to get in there, but every time I’ve been over it’s been a weekday and the museum is only open at weekends.

It was worth the wait. Small but beautifully put together with so many photos and items of interest including the restored figurehead from the original HMS Ganges. There are endless folders to look through containing more photos and interesting documents. I went through some hoping for a glimpse of my mum or dad, but alas not this time. It is so lovingly kept and cared for and the people working there so friendly and helpful.
I became unexpectedly choked up. It was an emotional experience on many levels. The photos of the boys who looked so young and who would have been at war soon after; the woollen long johns worn by men like my dad on the Arctic convoys; the thought of how much my mum would have enjoyed looking round there. It all got a bit much for me.

Anyway, had a little walk afterwards, looked longingly at boats for sale and took this final photo. It made me smile. Perhaps you’ll be able to see why – perhaps you won’t. 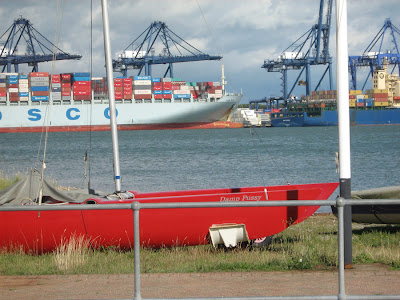