One Thing and Another

Well if you’ve been on your toes you’ll have your Christmas stories written and submitted and be well into the New Year if not Valentine’s Day by now.

Okay that’s the writing bit out of the way.

Himself put his back out trying to assemble the bargain child’s gazebo I bought and I gave myself (thank you Me) a thumping headache trying to blow up the inflatable pirate ship (and that was using a pump).

To add insult to his injury I told him I didn’t want the gazebo out anyway and dismantled it again. He’s been eyeing up the patio – I think he’s planning where he’s going to bury me.

We’ve had the paddling pool out and the water pistols. We’ve walked in the woods and over the fields. It’s been a nice, but busy week.

We went to Bressingham Steam and Gardens in Norfolk on Thursday – quite a long drive, but worth it if only for the rides on the Gallopers!

The kids really liked riding on the trains too – but weren’t so keen on the Dad’s Army exhibits (why would they be? Much as I love Dad’s Army, we only went in there because it was cool and out of the sun). Imogen said the exhibits were scary! Well she is only two!

The gardens looked gorgeous all lush and colourful, but small kids and gardens . . . they spotted a big yellow hose and decided it was a giant snake and they’d like to pick it up . . . so we ventured in and ventured out again pretty quickly.

There is something special about places like that – they’ve got a certain charm, perhaps it’s the people who work there who are so friendly and unhurried and willing to ruffle a little boy’s hair and wave to a happy little girl.

The visitors were a friendly bunch. Smiling faces everywhere! No push and shove. Even the wasps were friendly. I kid you not. They didn’t keep dive bombing us once they knew they weren’t welcome (I think it was me running round in circles flapping my hands in the air and screaming that gave them the hint) but just flew off without so much as an angry buzz.

The farmer has finished harvesting so the fields are all scratchy stubble. Indy loves it. Here’s a picture of him rolling about – not in anything dead, just enjoying the scratchiness of the stubble – and I swear he’s laughing. 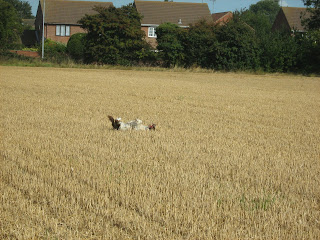