I nipped into Morrison’s to pick up stuff for a picnic as we were planning a day out and about and I hadn’t made a picnic of my own – lazy so and so!

We planned a trip to Shotley which was home to HMS Ganges. It sits with the River Orwell on one side and the River Stour on the other and looks out over Felixstowe, Harwich International Port, Harwich Dock and out to the North Sea.

Of my picnic my other half said, “Remind me next time we have a picnic not to let you choose it!”

So what exactly is wrong with Dairylea Dippers, Lunchables, mini cocktail sausages (with tomato sauce), babybels and mini Victoria sponge cakes? There was a good reason I didn’t buy sandwiches . . . there were two men and several children playing with the balls from a display right next to the sandwich fridge and I wasn’t about to risk life and limb for a couple of BLTs and an egg and cress!

I bought us a packet of six rolls and I said it would remind us of our school days if we had dry rolls stuffed with crisps.

Somehow they used to taste so much nicer in the old days!

We went to a play park in Bradfield, then to a picnic area on the river Stour at East Bergholt for what is now laughingly known as my picnic. This is near to Flatford, home of the Mill and Willy Lott’s cottage. It was lovely and peaceful – and empty! 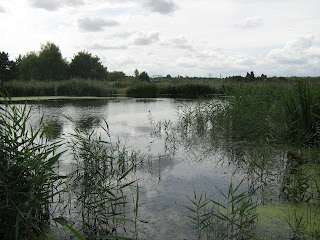 From there we drove to Shotley. See this river? Same one as above. A river is a bit like a book isn’t it. Starts off small and kind of hopeful and ends up huge and busy and changed. Well I’m sorry, but I had to get something in here somewhere about writing didn’t I? 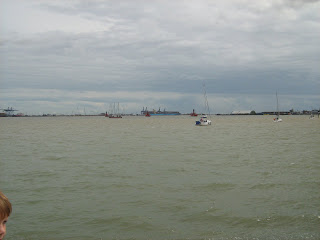 That’s Felixstowe to the left, Harwich Dock to the right and straight ahead to the North Sea.

Lachlan and I went for a walk round the marina and found a trail that skirts round the edge, lots of boats (what else?) and a little bit of beach where we made shell butterflies on the sand.

A couple of pictures of Felixstowe. 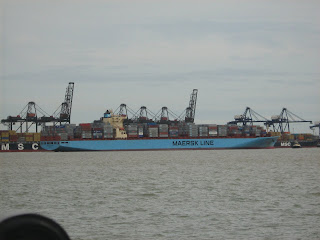 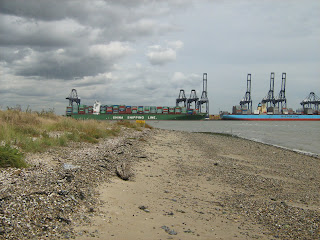 And I couldn’t resist this one – a Thames barge sailing past. I love those! 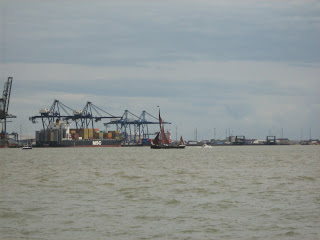 There’s a museum at the marina now – the HMS Ganges Museum, but they only open at weekends. Well I’m going to be away from home this weekend, but I hope to go back there sometime in the future.

I should include a picture of Shotley shouldn’t I? Stupidly I didn’t take many of Shotley – I was too busy pointing my camera at all the other bits! 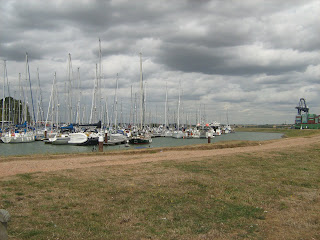 No story ideas, but I do feel inspired!
We're going to have another picnic tomorrow. This time I shall mostly be making sandwiches!

My parents met at HMS Ganges during WWII. The place is somewhat special to me.