We took Dusty back to Newmarket on the 29th December for x rays to see how he’s progressing. He was walking well and his incision had healed so well you could barely see it, so I hoped they’d say he was doing marvellously. But there is only limited healing of his bones. We came away feeling rather down.

Almost as soon as we got home, he started biting at his leg and on Saturday he made part of the scar pink and sore so it was back on with the dreaded lampshade. 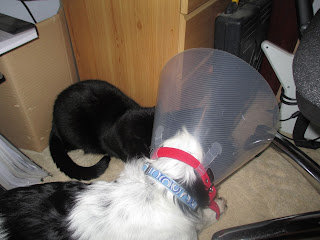 We took him to see our vet when we took Harley in. He found that Dusty’s kneecap is now loose which can be a complication of the surgery and he would need another operation to fix it.

We couldn’t get back to Newmarket this week, so our vet did the x rays to check the implant is still okay as they were worried that something might have gone wrong with that. We then had a worrying wait while the orthopaedic surgeons looked at the results and decided what to do.

Today we heard that the implant is fine and when his bones have healed, he will have to have another operation to sort his kneecap out and in the meantime, more x rays in a few weeks to see how he’s progressing.

We’ve done everything we’ve been told, keeping him on the lead unless he is in a small confined area with nothing to jump on, carrying him up and down stairs and in and out of the front and back doors. Visitors are kept to a minimum and he doesn’t get to see any other dogs. He has a good quality diet and hasn’t put on any weight and he is never left alone even for a minute.

When his little people come to see him, they crawl in on their hands and knees so he won't jump up at them!

I’m still sleeping downstairs with him so there’s no risk of him jumping on and off my bed and it looks like I’ll be doing so for the foreseeable future.