A Fit of the Naughties! 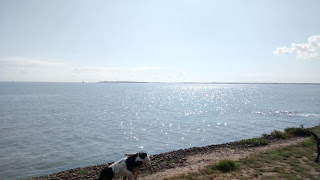 Dusty has naughty days when he keeps gathering things up. Often he’ll come in from the garden with a stone, a leaf or a stick. Sometimes it’ll be one of Harley’s beds or a toy or a shoe. I took all these photos one afternoon after school when he got a fit of the naughties!

He is extremely quick to learn (except when it comes to walking nicely on the lead) and I have inadvertently taught him that if he brings me something, I will exchange it for something tasty. He usually brings his finds and sits in front of me with them as if to say, “Where’s my treat?”

Indy used to do the same when the children were playing. In his case, I think he just wanted to join in the fun. I think Dusty does too - the treats are an added bonus!

He finds things when we’re out. At the moment there are a lot of windfall apples to be found and we can have quite a lengthy game of fetch with one of those before it disintegrates.

Last weekend he saw this at the beach. 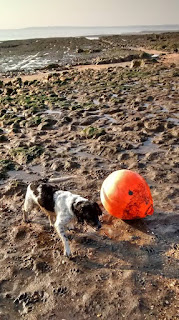 He approached warily, walked round it, cocked his leg up at it, then moved on. But I wanted a photo of him with it and the only way to get him back was to offer him a dog biscuit – so that face he’s pulling is his eating a biscuit face.

This lovely September warm spell has enticed him back into the water. He’s been doing a lot of swimming over the past few days. When the tide is out he swims in the creek, but it’s too dangerous to swim there when the tide is in. It’s very deep and very fast moving. 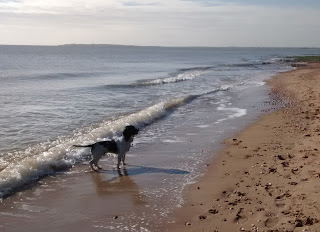