Still Looking for the Perfect Curve

We were back at the vet’s today with Indy’s latest glucose curve results which weren’t good. He starts off with his glucose readings near normal, then after insulin and breakfast the reading shoots up by 20 or more points.

Worryingly he was off the scale a couple of times. What should happen is that his blood glucose drops slightly during the day and rises again towards evening in a gentle curve. What actually happens is that his glucose levels go up and up, then drop in the late afternoon. He has his tea and his second insulin dose and up goes his glucose again.

This seems to suggest that his body is going into rebound and making glucose. The insulin appears to have an effect about ten hours after he has it. So we are going to try dosing him once a day. Apparently this works in about a third of dogs, but he will be at greater risk of a hypo.

What complicates matters is his EPI (exocrine pancreatic insufficiency).

Apart from that he seems fine. I know it can take a very long time to find the right balance and that it can be a constant juggling act, but while I worry and fret, he takes everything in his stride and is perfectly happy.

The day after the first time I did a glucose curve with the hourly blood tests back in October, he avoided me and stayed downstairs all day. I was terrified he’d end up hating me. Now when I do his blood tests, he waits patiently, then once it’s done, he settles back to sleep with his head in my lap or on my feet.

At insulin time, he runs to sit beside the fridge and waits for the injection – it’s almost as if he looks forward to it. He couldn’t be more cooperative if he tried, bless him.

In case anyone was wondering, this is how the chart looks. 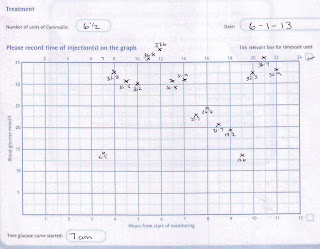 You can see where he's gone right off the top of the chart.

An ideal curve would look like this (if you follow the link and scroll down to the bottom of the page there's an example). You can see we've a long way to go still!

I start testing at 7 am and do a blood test every hour till 10 pm, or later if I can stay up!

So far I’ve done five of these curves and he’s had one done at the vet’s.

So from tomorrow instead of 6.5 units twice daily, he’ll be on 10 units once daily. Wish us luck!