I want to put the record straight. I am not the helpless blind little bat that Indy makes me out to be and I’m not the only one who spends a lot of time in bed. 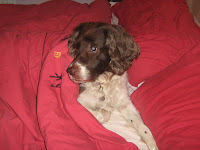 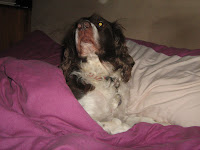 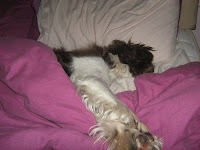 I rest my case – rather like he’s always resting his head – on a pillow!

I am getting along fine. They’ve solved the problem of me falling off the end of the bed by putting a huge bean bag on the floor so now instead of landing with a thud, I land with a rustle.

And they’ve been taking me to new places which used to scare me, but now I love it. I can’t see or hear danger (hearing’s gone a bit) and so I trot along in my dim little world and feel safe. Unless she lets me off the lead. Then I do panic a bit. Well a lot actually, so it’s the extendable lead for me and I love it. 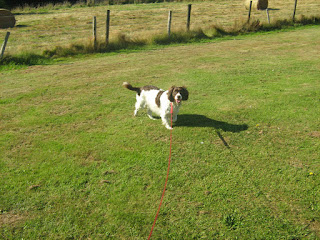 But as far as that narrow log bridge goes, let’s not even go there. In fact I hope I don’t ever have to go there again. We only went there because they managed to get lost in the woods and went down the wrong path. Took a wrong turn at Albuquerque apparently. Indy went crazy, rushing about chasing leaves, squirrels and falling chestnuts – fool.

They’ve tried buddy strapping me to the dopey one, but frankly I don’t want to go in the sort of places he goes and I certainly don’t want to be there when he’s rolling around in dead stuff waving his legs in the air like an idiot.

They tell me it’s October and hot. And they talk about my eyesight being poor, but herself sat there this morning gazing out the window and admiring the misty view before realising the mist was on the window and beyond it the sun was shining.

Before I go, I must just tell you about the monster in the garden. The other night Indy went out and before I knew what was happening, this ball of fur was flying through the air. I’m told he leapt all four feet off the ground, spun round in mid-air and landed in a heap before running off and hiding behind the bushes.

Well I don’t pay much heed to his silliness so I got on with having a wee and had a little sniff at the same time – as you do – and suddenly my nose touched something prickly. Did I leap up in the air? Of course not. I carried on and just stopped sniffing the prickly thing.

It lives in our garden and from my investigative sniffing I’d say it’s the size of a small melon but not quite as round. Indy tells me it’s as big as the house, has huge pointy teeth and claws of steel. Well I tell him he’s been listening to the Gruffalo too much and he goes off and sulks. 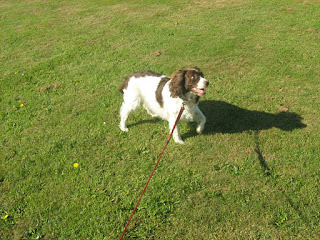 Herself is in a good mood today. She’s turned all her calendars over and says there’s nothing like a new month for a new start. And now she’s telling me to get off the computer so she can get started on her new start. How many times have I heard that one before?

Happy October and may the muse be with you (don’t know what that means, but herself likes it when people say it to her).