I Don't Believe It!

Greyfriars Bobby a myth? All made up to bring in business? I don’t believe it. I don’t want to believe it. To be honest I don’t care if it was made up. So there!

And also in the I don’t believe it category – The Royal. Anyone else watch that? I love it. I love Doctor Ormerod and his lovely wife, Doctor Weatherill. I love Sister Brigid and Matron and the pipe smoking Mr Rose. I love that it is set in kinder times.

If you’ve never watched it, well it’s too late now because it’s gone. Every series finished on a cliff hanger and the last one of the latest series ended with… well I shan’t say in case any Royal fans are reading this and haven’t watched the last one yet. But I cried buckets and I can’t believe they left us hanging like that. It would have been kinder to us faithful viewers never to have shown that last episode at all so we could imagine life in Royal-land going on as ever it did.

I know one of the nurses has got a job in Holby City – and she hasn’t aged a bit!

I received a free copy of a fat glossy magazine with a hefty price tag in the mail today and so far all I’ve found in it are adverts. I don’t believe that either. I’m going to keep looking – there must be something in there to read! But it was free, so it’s mean of me to moan isn’t it?

This week I bought a heat gun which keeps cutting out. I read the reviews online after I bought it and apparently no one would recommend it. The cheaper one had much better reviews. I don’t believe it! A wise man once said “You can’t afford to buy cheap”. Well he obviously hadn’t bought a blankety-blank heat gun!!

Here’s a picture of Indy in the woods this morning. When we got out there he said I don’t believe it – new smells, squirrels, no other people – fab! Tilly said it was very nice, but she prefers the lane and the fields thank you very much. 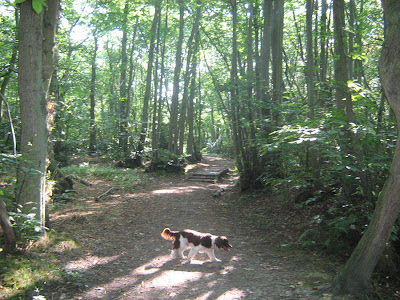