I was watching a wood pigeon this morning sitting on top of the lamp post opposite my window. It was peeing down with rain and he was sitting with one wing up in the air.

I thought he might be injured, but then he tucked that wing down and promptly lifted up the other one. He was merely having a shower. It was fascinating. He was out there for ages making himself look handsome.

We haven’t had a lot of rain, but after one mini deluge we found this little chap hiding under the hammock cover. 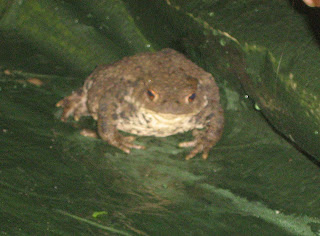 I’d hoped to have some baby news by now, but at least we know it won’t be any later than next Monday. But my bags are still in the boot just in case we get called out before then. Fingers crossed we do.

I shan’t go into the downs. Downs are depressing. But the only way to go from a down is back up.
Posted by Teresa Ashby at 17:08