The eyes say it all 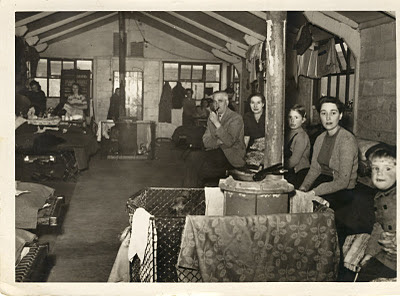 This hut was my mum’s home after she was made homeless in the 1953 flood. I think her eyes look so sad. That’s her father (Pop) with the pipe and her mother, my grandmother who I never met, sitting next to him. I don’t know who the little girl is, but I think the little boy is my mum’s cousin’s son.

My parents had lived with my sister in one of the houses in the street that faces the camera in the picture below. At the time my sister was 6, ill and needed urgent medical attention. My mum was faced with a choice – keep her little girl with her and hope for rescue, or pass her out of the upstairs window to soldiers in an already full boat. 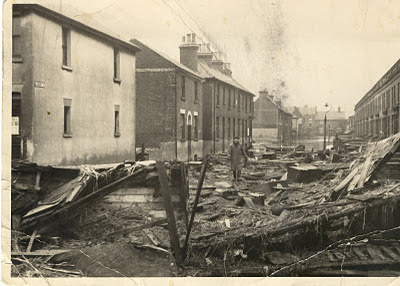 She handed my sister over. She told me it was one of the most difficult things she ever had to do and the sight of her blanket wrapped child being taken away broke her heart.

She also didn’t know if her parents who lived nearby were safe. Her brother had been round earlier to warn them that a high tide was coming and to move everything upstairs. And she said when the water hit, it was like a tidal wave, smashing the front door in and gushing into the house.

Eventually they were rescued and taken by raft to dry land. They were then moved to a transit camp which was to be their home for several months and which they shared with several other families. The family doctor found them and let my mum know her daughter was recovering in hospital.

It wasn’t the first time they’d found themselves homeless. They lived in London during the Blitz and their home there was destroyed.

At the time of the flood most people were insured with one or other of two different insurance companies. One company paid out to those who lost homes and possessions – the other company said it was an act of God and paid out nothing. You can probably guess which one my parents were – or were not as it turned out – insured with.

When they were allowed back to their homes to salvage what they could, they found my sister’s piggy bank had been smashed, the pennies taken from inside. All my mum’s treasured books were ruined and many precious photographs destroyed.

What photographs and documents we do have from before 1953 are damaged and still caked in mud. My dad salvaged his mother's birthday book in which she'd written poems in memory of her cousins who died in WWI and her first baby who died. It is very damaged, but very precious.

The 31st January will be the 59th anniversary of the flood.

What makes the picture even more poignant is that my grandmother died less than two years later and it may well be the last photograph ever taken of her.

When you look back at the things your parents and grandparents lived through – things still in living memory – well it makes you realise how lucky you are really doesn’t it?